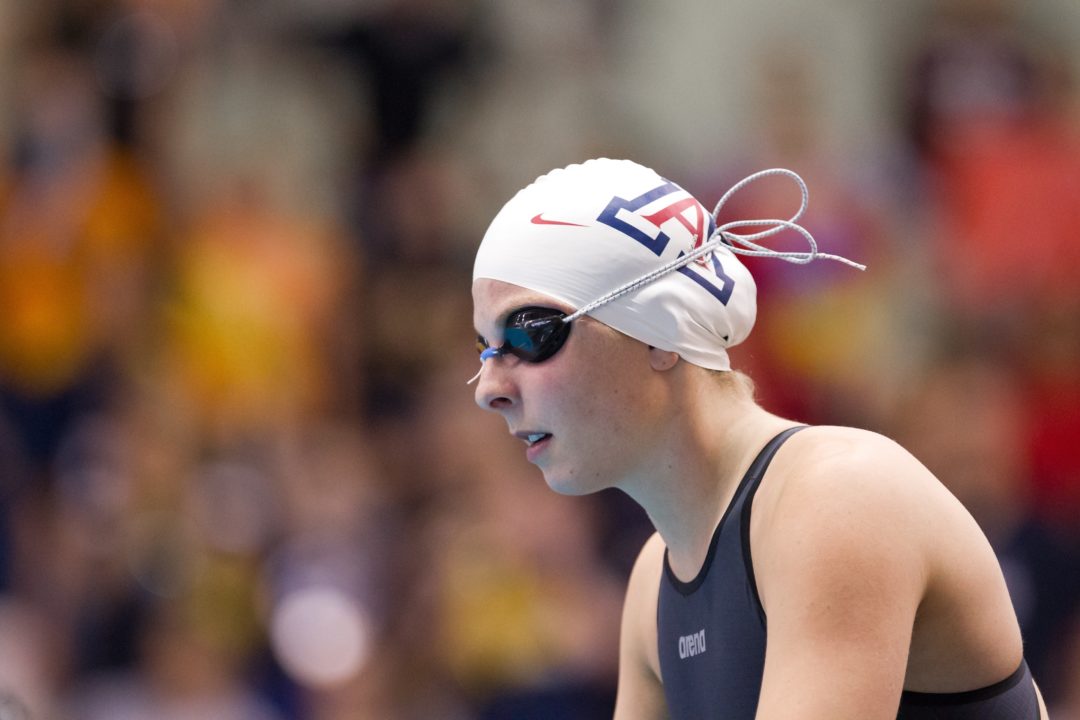 The Iowa Hawkeyes welcomed in a midwestern women’s quad meet on Saturday between themselves and the Indiana Hoosiers, the Illinois...

The Iowa Hawkeyes welcomed in a midwestern women’s quad meet on Saturday between themselves and the Indiana Hoosiers, the Illinois Illini, and the Missouri Tigers of the SEC; and a tri-meet against just Indiana and Missouri on the men’s side.

Iowa’s women swam very well also, and topped Missouri 164-135. The Missouri women did pick up 5 event wins, but Iowa showed off a new level of depth to better them in the scoring.

Indiana kicked things off with a 1:41.22-1:41.66 win over the Missouri women in the 200 medley relay. This is probably both teams’ best relay, and each had a really huge leg. For Indiana, that was Brooklynn Snodgrass, who led off in a 25.14 backstroke split to give the Hoosiers a 1.8 second lead headed into the breaststroke leg. Missouri, however, made most of that up on the breaststroke and butterfly legs, including a 23.44 fly split from Dani Barbiea.

Coming home, though, it was Indiana senior, and former Arizona Wildcat, Kait Flederbach who out-split Anna Patterson 22.64-22.88 to finish off the Indiana win.

The three big splitters mentioned above all went head-to-head at least one other time in this meet, in the women’s 50 free. In that race, Flederbach won in 23.15, followed by Barbiea in 23.28 and Snodgrass in 23.75.

Flederbach also took an official win in the 200 free in 1:51.41, beating Illinois senior Courtney Pope and her 1:51.81. Though not represented in the final score, Illinois swam extremely well throughout this meet: their best meet this year aside from their mid-year invite.

The top finisher in that race, however, was Lindsay Vrooman, who wound up as an exhibition non-scoring swim, out of the other heat in 1:48.82, and another Hoosier Cynthia Pammett took 2nd in 1:50.69 in another exhibition win.

Snodgrass didn’t get any individual wins on the day, as she didn’t swim either backstroke race that are her specialties. She did, however, get two relay victories: in addition to the 200 medley, she anchored a 3:25.14 in the 400 free relay that also won, splitting 50.91 (Flederbach was 50.28).

Taking a surprise 2nd place in that relay was Illinois in 3:27.36; they got a 51.6 from senior Jessi Holz as their best split.

That was the story of the night for the Iowa women. Though they didn’t win a single race overall to Missouri’s 5, in this quad-meet format teams’ results are matched up head-to-head, and Iowa in many cases had multiple finishers ahead of Missouri’s top swimmer, though behind the winner from Indiana.

What wound up to be a good meet for the National Teamer almost wasn’t: she missed the team transport from the hotel to the pool, but fortunately for her, former Iowa swimmer Devon Meeks works at the hotel that Indiana was staying at. Putting rivalries aside for the day, Meeks wound up driving Vrooman to the pool.

Missouri’s other two wins came on the 1-meter and 3-meter springboards, which were swept by Lauren Reedy in the absence of All-American teammate Loren Figueroa.

Illinois’ lone individual win came from junior Allison Meng in the 100 back, which she won over a pair of talented Indiana swimmers. The Hoosiers’ Justine Ress was 2nd in 55.58 and Allie Day was 3rd in 55.74.

The Missouri men kicked the meet off with a win in the men’s 200 medley relay, swimming a 1:28.95 to beat Indiana’s 1:29.35. In a back-and-forth battle, the Hooisers held the lead early with a 22.15 lead-off split from James Wells. After getting a little back on the breaststroke leg (Mark Conroy out-split Cody Miller 24.8-25.0 on the breaststroke leg), Missouri took their 1st lead on the butterfly leg.

On that fly swim, Logan Mosley was a 21.03 to pull well in front of Indiana junior Steve Schmuhl, who split 22.13. Indiana has tried a lot of different combinations on their medley relays in the last year, some that include Schmuhl swimming fly, and some that include using some combination of Tanner Kurz and Cody Miller on the middle two legs.

There were a ton of great, well-known breaststrokers in this meet, but it was a lesser-known, though very good, Roman Trussov who won the men’s 100 breaststroke. The Iowa sophomore took the title in 54.52, beating out Missouri’s Sam Tierney (55.09), Indiana’s Cody Miller (55.52), and Indiana’s Tanner Kurz (56.30) for the win.

The aforementioned butterflier Schmuhl was more back into his primary element in the 200 fly later in the meet, which he won in 1:47.36. That’s easily the best time he’s seen in a dual meet this season. Indiana was 1-2 in that race, with freshman Max Irwin taking 2nd in 1:49.14 and Missouri’s Mack Darragh 3rd in 1:49.20.

Indiana’s Jackson Miller, who came to Bloomington as a very versatile 50-500 freestyler, won the 500 free in 4:30.37. So far this season, he’s leaned more toward the middle-distance side of his range than the sprint side.

While they’re still working out some kinks in their sprint fly group, Indiana’s sprint free group has solved their similar situation pretty quickly thanks to freshman Anze Tavcar. Tavcar won the 50 free in 20.18 and the 100 free in 44.21. That 50 free is a career-best on a flat start for the 19-year old Slovenian import, and the 100 free missed by just under two-tenths of a second.

I’m not understanding why the photo with this article is of a University of Arizona swimmer. Did I miss something?

PAC12BACKER, that’s Kait Flederbach. Former U of A swimmer, now at IU.

Thank you. I missed that reference stated within the article.

In hindsight…I probably would’ve picked a different swimmer, one wearing an Indiana cap.

haha to be honest, i didn’t remember her name xD

There were more DQs in this meet than I have ever seen in a dual meet. I’m not entirely sure what would cause that. It seems like swimmers that normally are not DQed wouldn’t change their stroke in a dual meet but, who knows?…

0
0
Reply
Braden Keith
Author
Reply to  No bus, no problem

See, I thought that was true….but the Vroomonster was the only one who got called out on Twitter by Devon.

Is Matt Gerth not swimming for IU this season? I followed him when he swam for Carmel HS in Carmel, IN.

Flederbach actually came 3rd in the 200 free, winning the first heat, but Vrooman and Pammett were first and second overall from the second heat!

You’re right – missed the exhibitioned swims on that one. Will fix now.