Indiana To Face Louisville On Friday 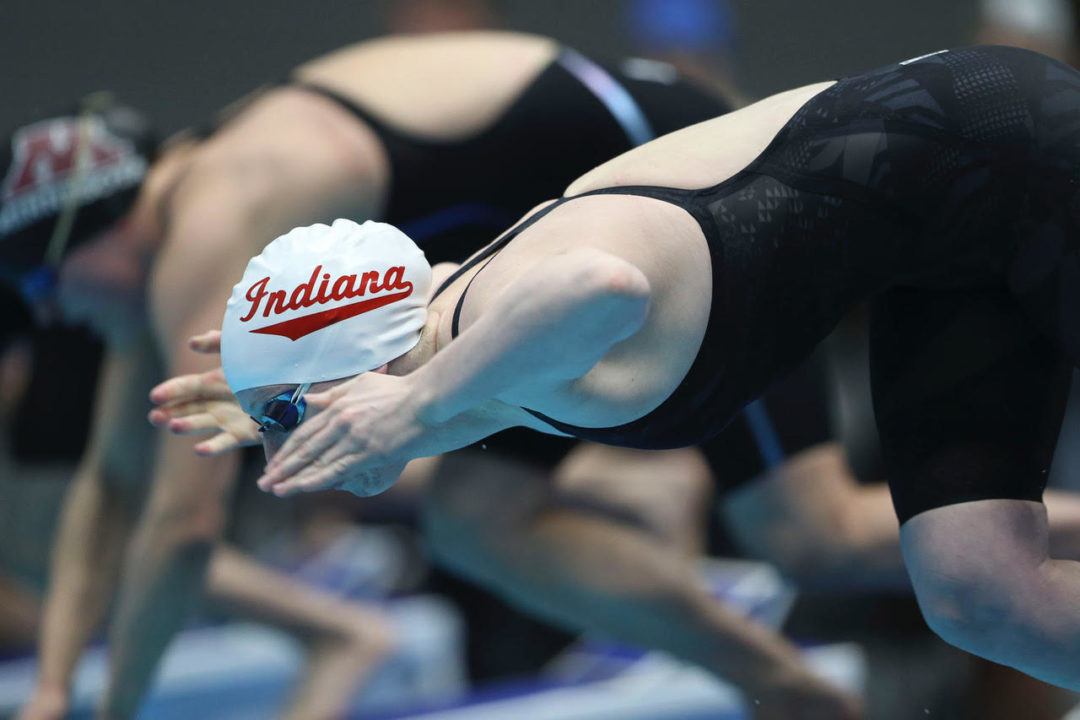 The No. 3/7-ranked Indiana University men’s and women’s swimming and diving teams will wrap up the 2017-18 dual meet season on Friday afternoon when they face No. 14/10 Louisville. Current photo via Tim Binning/TheSwimPictures.com

The No. 3/7-ranked Indiana University men’s and women’s swimming and diving teams will wrap up the 2017-18 dual meet season on Friday afternoon when they face No. 14/10 Louisville.

The standard, 32-event dual meet will get underway at the Ralph Wright Natatorium on Friday at 2:00 p.m. ET. 1-meter and 3-meter diving will take place during the breaks of the swimming program.

Follow @IndianaSwimDive on Twitter for the latest updates on race results and find results on the Meet Mobile App.

The No. 3-ranked Indiana men’s team enters the meet with a record of 8-0 this season, having won the team’s past 21-straight dual meets. The men’s squad is 5-0 against ranked teams this year, earning wins over No. 2 Texas, No. 4 Florida, No. 8 Florida, No. 13 Notre Dame and No. 15 Tennessee.

The No. 7-ranked Hoosier women’s team defeated Purdue last Saturday to move to 4-4 in dual meets this season. IU has posted victories over No. 15 Kentucky and No. 18 Florida this season.

The No. 14-ranked Louisville men’s team enters Friday’s meet with the Hoosiers coming off a 168.5-131.5 victory over Kentucky. The No. 10 Cardinals’ women’s team fell in a tightly-fought contest to the Wildcats, 161-139.

On the year, the Hoosiers have combined to win 20 weekly Big Ten awards, four more than Michigan (16) and 12 more than Iowa (8). Both teams have won 10 honors each so far this season.

Hixon, Connor Win Diving Titles
Michael Hixon and James Connor each won diving titles the week of Dec. 18. At the 2017 USA Diving Winter National Championships in Greensboro, N.C., Hixon won gold in the 3-meter dive with an impressive score of 1231.85. At the Gold Coast Commonwealth Games Trials in Australia, Connor took home the gold in the 3-meter, winning with a score of 868.70.

IU Posts Impressive Times at Purdue Invitational
The IU women’s team won the Purdue Invite, topping the eight-team field with a total of 896.5 points, while the Hoosier men finished second with 847 points as No. 3 Florida won with a score of 1,009 points.

And on the women’s side, Indiana came within 26 points of Texas, a top-5 program a year ago, while beating up on Florida. IU swept all eight relays at the tri meet and won 25 of 42 swimming events between men and women.

Overall, the men’s and women’s squads combined to win 14 events on the afternoon. The Hoosiers continued to swim fast early in the season, posting seven times in the top-10 across the country, including two best times in the nation.

Looze was a women’s assistant coach on the USA staff in Budapest, and he led the Hoosier men to a seventh-place finish this summer at the NCAA championships, and his women took eighth.
King won four gold medals at the World Championships this year and set (or helped set) world records in all four events: the 50 breast, 100 breast and both the women’s and mixed 400 medley relays. Looze also put Cody Miller, Blake Pieroni and Zane Grothe onto the World Championships roster, and all won at least one relay medal in Budapest.

Indiana Men Win 2016 Big Ten Championship
The Hoosiers won the program’s 25th Big Ten Championship in 2016 – the first title for IU since 2006. IU won the team title with a total score of 1,504 points. For the week, IU won a total of 19 medals – 12 gold, five silver and two bronze. Indiana also won four of the five relays at the Big Ten Championships, marking the first time in program history the team accomplished that impressive feat. The dozen league crowns are the most for the team since winning 13 in 1976.