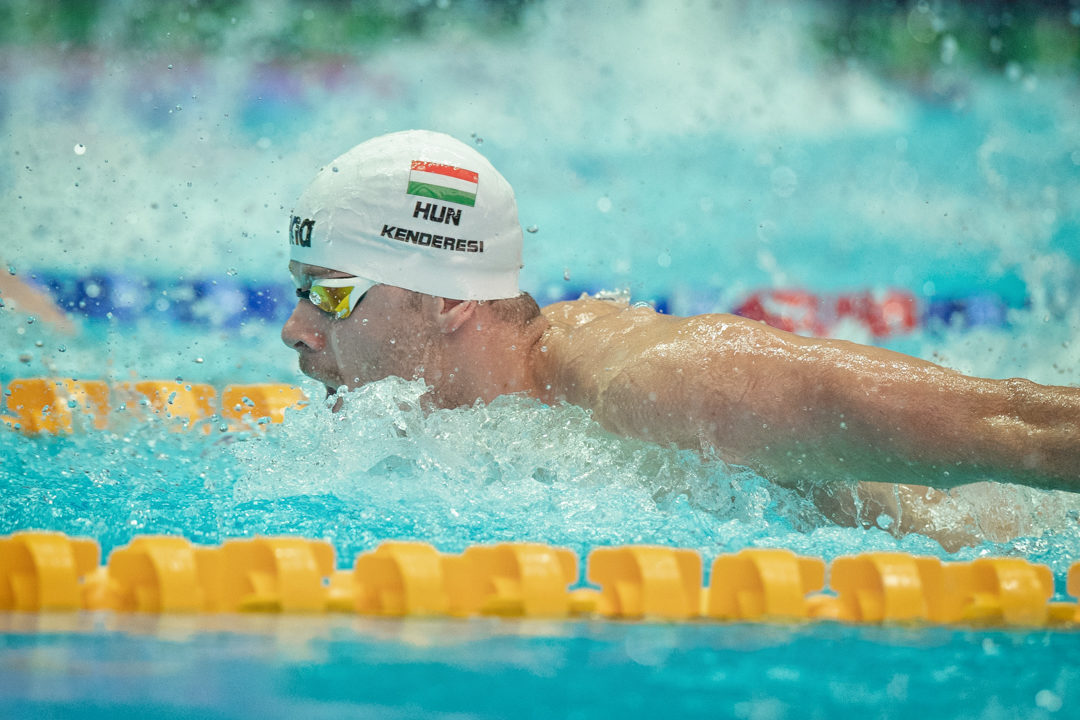 The 2020 Hungarian Swimming Championships kicked off today in Kaposvár, with the competition following the unique format of next year's Olympic Games.

The 2020 Hungarian Swimming Championships kicked off today in Kaposvár, with the competition following the unique format of next year’s Olympic Games. That means we’re seeing prelims in the evening and finals the following morning, mimicking what the qualifying swimmers will experience in 2021.

As we mentioned in our meet preview, Hungary’s most successful Olympic swimmer Katinka Hosszu is opting out of this meet in order to focus on training for next year. Swimmers will have at least one more Olympic qualification opportunity in the form of the Hungarian Championships set for April.

Looking at day 1 prelims results, it appears that World Record holder Kristof Milak has recovered from his coronavirus bout which rendered him out of the International Swimming League (ISL) season 2. Tonight he put up a solid prelim swim of 1:57.56 in his signature 200m fly event to take the 2nd seed headed into tomorrow morning.

Leading the way is Tamas Kenderesi, the Hungarian who took Olympic bronze in this 200m fly event at the 2016 Olympic Games in Rio. Tonight Kenderesi touched in a statement-making time of 1:55.86 to represent ‘the hunted’ in tomorrow morning’s final race. His time checks-in as the 3rd fastest in the world this season with the final yet to go.

Behind Milak’s World Record-setting 1:50.73 which won him gold at the 2019 World Championships, 23-year-old Kenderesi placed 8th in a sluggish 1:57.10. As such, his time here already lays waste to that performance in Gwangju.

Of note, Kenderesi was involved with a sexual harassment suit stemming from an event transpiring after the World Championships concluded. You can refresh yourself of that situation here.

Veteran Laszlo Cseh, who turned 35 years of age this week, is hanging in as the 7th seed in this grueling 2fly event, clocking a time of 2:01.49 to make the final.

Reigning women’s 200m fly world champion Boglarka Kapas easily claimed the top seed in the event tonight, hitting the only sub-2:10 time of the field. Kapas ripped a time of 2:07.97 to put her competition on notice, with the next closest swimmer represented by Zsuzsanna Jakabos who touched in 2:10.66.

Kapas took the world title in a time of 2:06.78 and was one of the Hungarian swimmers who tested positive for coronavirus earlier this year. She has since tested negative and went on to earn 67 points for the ISL team of NY Breakers this season.

Youngster Ajna Kesely is also in the mix tonight in this women’s 2fly, with the 19-year-old getting to the wall in a time of 2:10.79 for third out of the heats. That’s already nearly at her own lifetime best, which stands at the 2:10.38 from May 2018.

Another promising swim from this prelims session came from national record holder Maxim Lobanovszkij in the men’s 50m free. He produced the only sub-22 second time of the field in a mark of 21.77. His outing checks-in as the best of his career, shaving .02 off his previous PB of 21.79 produced in March of 2019.

Other players to look for in tomorrow’s final include Nandor Nemeth and Szebasztian Szabo, who collected prelims times of 22.14 and 22.28, respectively.

Entering this meet, Telegdy’s career-quickest rested at the 54.44 he logged at the Hungarian Championships in March. Flash forward to tonight, however, and the 2016 Olympian came within striking distance of Cseh’s national record of 53.40, a time that’s been on the books since 2012.

With tomorrow’s final in view, Telegdy just became Hungary’s 3rd fastest 100m backstroke ever and just the 3rd man to be under 54-seconds in the event, sitting only behind Cseh and Richard Bohus. Bohus will indeed be in tomorrow’s final, squeaking in slot #7 with a swim of 56.46.

the morning you mean?

3
0
Reply
Sam B
Reply to  Cookedlays

No olympic A standard yet for Hungary in women’s 100 breast. Looking forward to this event as i see some chance that this change this morning. Go girls, get closer to that mark, i would like to see at least a sub 1:08 time from someone.
Also wartching multiple WC finswimmer Petra Senánszky what she is capable for in 50m free.

Almost under 1:08. Halmai Petra is getting closer to the NR and the A standard. She has the ticket at the moment with the best B standard time.

Does Hungary take B times (I hope they do for Petra as she has improved so much in the last 2 years) but many countries require A cuts or faster.

Yes, this is a general policy in Hungaian sport, not just swimming. Those who qualify deserve to be there. In this case if no athlete makes the A cut then the athlete who has the best time in the qualification period gets the ticket.

21.7 from lobanovskij is pretty awesome

Kenderesi won the morning final in 1:54.6 with Milak second in 1:54.9. Presumably both qualify?