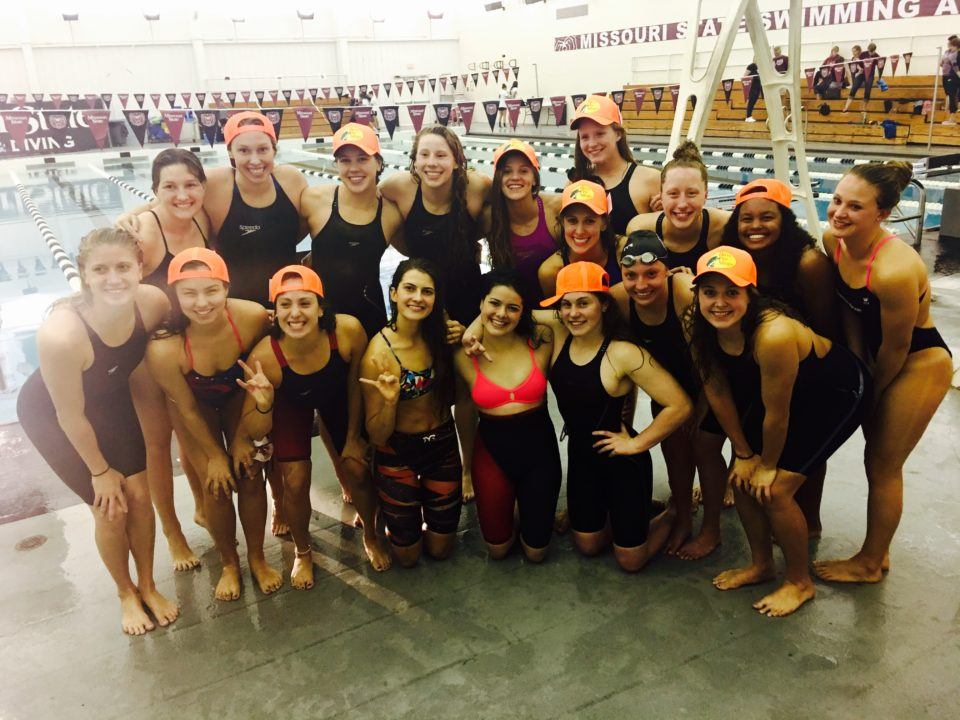 Missouri State and Houston were forced to share the team prize, Bass Pro Trucker Hats, after ending in a tie at the first ever Missouri State Invitational. Current photo via Missouri State Photographic Services

The first ever Missouri State Invitational brought seven mid-major women’s teams from Conference USA and the Missouri Valley Conference together for what has proven to be a strong showing of early season speed.  Highlights include several Hammons Student Center Records that were set with the unique split session format creating an intense atmosphere to bring out the best in all teams.

The morning session opened with a Hammons Center Record right out of the gates when the MOST Lady Bears squad of Sarah Allegri, Lauren Pavel, Sydney Zupan and Loretta Stelnicki took down the mark set by Mizzou in 2014 with a 3:43.66 for the 400 Medley Relay.

The very next event ripped the previous 200 Freestyle Pool Record to pieces as University of Houston freshman Zarena Brown dropped a 1:50.81 to lower the 2013 mark of 1:51.01 set by Anna Mayfield from the University of Arkansas.  The next heat brought three girls below that mark again as SIU’s Kelsie Walker (1:50.67,) Rice’s Alicia Caldwell (1:50.59,) and Houston’s Keshia Yuskova (1:50.00) were tight together and trading leads right up to the finish to drop the record even lower.

The 100 fly saw MOST’s Sydney Zupan turn in a time that would have won the event at the 2016 Missouri Valley Conference Championship and dropped .9 from the Hammons Center Record set by Mizzou’s Tasha Truscott in 2011.  That record had already gone down when freshman and fellow Lady Bear Sara Bacher reduced it to 55.45 in the heat before.

Another HSC mark fell in the 50 freestyle when MSU’s Loretta Stelnicki cut .06 from it to take the win at 23.46.  It is worth noting that the defending MVC Champion in the event, Molly Lembezeder finished fifth in 24.31, but the entire Northern Iowa team hasn’t shown their cards yet as they chose to be the lone group not racing in tech for this meet.

After session 1, the MSU Bears held the lead at 180 points, with Houston close behind at 172 and Rice within striking distance at 160.

The evening session saw more Hammons Center Records fall, starting with Bryn Handley from Southern Illinois crushing the previous mark and the rest of the field in the 500 free with her 4:51.52 finish.

Jaecey Parham was the next to take an eraser to the HSC record board when she rocked a 2:03.32 for the 200 IM.  The former record of 2:04.93 was actually broken by three athletes in the meet, with MSU’s Lauren Pavel doing it first in an earlier heat with 2:04.90, followed by Parham and Houston freshman Laura Laderoute who touched in 2:04.36 for second place.

The final race of the meet would determine the team title with Missouri State carrying a lead into the event.  The Rice University team of Caldwell, Nezelek, Gillentine and Parham came from behind to edge out Houston for the win, 3:25.43 to 3:25.77 taking yet another HSC Record in the process.  That left the Bears in third place at 3:27.35 and brought Missouri State and the University of Houston to a tie.

The Bears and Cougars tied for first with a total of 347 points while Rice finished the meet in third place with 326 points. Southern Illinois finished in fourth place (289) followed by Illinois State (243), Little Rock (217) and UNI (206).

Missouri State wasted no time at the beginning of session one when Sarah Allegri, Sydney Zupan, Lauren Pavel and Loretta Stelnicki of the women’s 400 medley relay set a pool record with a time of 3:43.79. Allegri started off the race followed by Pavel, then the MSU squad took a dominant lead during the butterfly leg thanks to junior Sydney Zupan while Loretta Stelnicki drove the event home.

Sophomore Josie Pearson took the A-Final of the 400 IM in 4:23.10 while Pavel finished first in the B-Final (4:28.40). Zupan swam a dominant 100 fly, winning the event and claiming the pool record in 55.12 seconds. Freshman Sara Bacher kicked off her collegiate career winning the B-Final of the 100 fly in a 55.45 performance.

In the 50 free, Stelnicki earned the Bears’ third pool record of the day in a 23.46 showing, just .02 seconds shy of her personal record. Freshman Sarah Wehrmeister saw her first action of the day, and of her collegiate career, placing second in the 50 free B-Final (24.38).

In two, nail-biting races, Pavel and freshman Vikte Labanauskaite each placed second in their respective finals during the 100 breaststroke event with Pavel recording a time of 1:03.07 in the A-Final and Labanauskaite finishing the B-Final in 1:04.96 seconds. Missouri State’s Stelnicki, Wehrmeister, Allegri, and McCullough rounded out session one with a third-place finish in the 200 freestyle relay.

Returning for session two with 180 points, Missouri State’s 200 medley relay went head-to-head with Rice for the duration of the event but earned a first-place finish with a time of 1:42.40. Zupan claimed the 200 backstroke A-Final in 2:00.02 seconds while Allegri finished third in the B-Final.

In a day filled with first-place finishes, Stelnicki continued the trend when she finished first in the A-Final of the 100 free (51.35).

With a two-point lead over Houston heading into the final event, the Bears swam a strong 400 free relay to close out the meet. Missouri State finished third in a tight race behind the Rice Owls and Houston Cougars with a time of 3:27.35. The Cougars’ relay time of 3:25.77 was enough to tie the Bears in total points (347) at the conclusion of the meet.

Next Up For The Bears