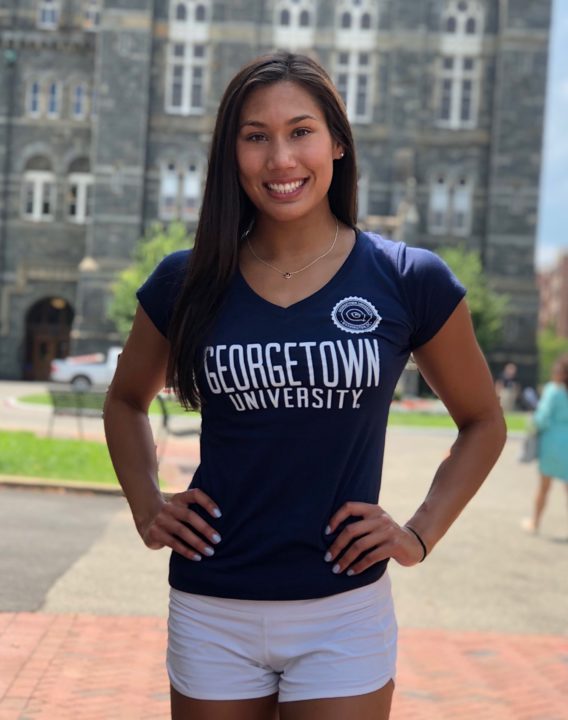 The newest members of the team, which include eight freshmen and three transfers, will all join the Hoyas for the upcoming 2020-21 season. Archive photo via Georgetown Athletics

WASHINGTON – Georgetown University Swimming & Diving Head Coach Jack Leavitt has announced the addition of 11 newcomers to the women’s team. The newest members of the team, which include eight freshmen and three transfers, will all join the Hoyas for the upcoming 2020-21 season.

Hailey Harkins
Back / Fly / IM
Chatham, N.J. / Chatham
Prior to Georgetown: Four-year member of the Chatham High School swimming & diving team, serving as a team captain as a senior … Helped lead Chatham to four-straight Morris County Championships, increasing the school’s streak to 12-consecutive titles … Helped lead Chatham to the 2017 state championship … Swam for the Berkeley Aquatic Club (2011-16) and Somerset Valley YMCA Swim Team (2017-20) … Mother, Suzanne, was a diver and father, Thomas, played football at Stony Brook … In the classroom, was a high honor roll student all four years and a member of the National Honor Society.

Erin Hood
Breast / IM
Atlanta, Ga. / Pace Academy
Prior to Georgetown: Four-year letterwinner at Pace Academy, serving as a team captain as a senior … Named Pace’s Standout Freshman in 2017 and Most Valuable Swimmer 2018-20 … Earned Georgia All-State First Team honors in 2020 and second team honors in 2019 … State runner-up in the 200-yard IM and the 100-yard breaststroke in 2020 … Holds Pace’s school records in the 100-yard butterfly, 50-yard freestyle and the 200-yard freestyle relay … Also ran for the track & field and cross country teams … Swam for the Dynamo Swim Club (2013-20) … In the classroom, a member of the National Honor Society and an AP Scholar with Distinction.

Emily Giesler
Breast / IM
La Canada, Calif. / Flintridge Sacred Heart Academy
Prior to Georgetown: Four-year member and four-year captain of the Flintridge Sacred Heart Academy swimming & diving team … Earned all-area first team honors 2017-19 … Named Flintridge’s Rookie of the Year in 2017 and team MVP 2018-20 … CIF Qualifier in the 200-yard IM and the 100-yard breaststroke (2017-19) … CIF Finalist in the 100 breast (2018-19) … Holds the all-area records in the 200 IM and the 100 breast … Swam for Rose Bowl Aquatics … In the classroom, was a First Honors student, an AP Scholar and a member of the National Honor Society.

Samantha Milligan
Free / Back
Needham, Mass. / Needham / UNH
Prior to Georgetown: Spent three years at the University of New Hampshire, swimming for the Wildcats as a freshman and sophomore … Swam in the 100- and 200-yard backstroke, as well as the 200- and 500-yard freestyle … Finished seventh in the 500 Free and 200 Back at the 2019 America East Championship, as well as 10th in the 200 Free … Mother, Deborah, was part of gymnastics team and father, John, played football at Michigan … Selected to the 2019 America East Academic Honor Roll.

Carly Rutledge
Free / IM
Darien, Conn. / Darien / Lehigh
Prior to Georgetown: Spent two years (2018-20) as a member of the Lehigh Swimming & Diving Team … Before Lehigh, was a four-year member of the Darien High School swimming & diving team, serving as a captain as a senior … Helped lead Darien to three-straight state championships (2014-16) as well as the 2014 conference championship … Earned all-state honors (2016-17) and named 2016 All-Fairfield County Interscholastic Athletic Conference … Selected as 2014 Darien Rookie of the Year … Holds the Darien record for the 200-yard Freestyle Relay … Swam for Chelsea Piers Aquatics Club (2012-18) … Sister, Lauren, was a member of the Georgetown swimming & diving team (2016-20) … In the classroom, member of the National Honor Society.

Sara Warm
Dive
Gainesville, Fla. / Buchholz
Prior to Georgetown: Three-year member of the Buchholz High School swimming & diving team, serving as a team captain as a junior and senior … Helped lead Buchholz to three-straight district championships (2017-19) and consecutive regional and state championships (2017-18) … Two-time City Diving Champion (2018-19) and three-time state qualifier (2017-19) … Named to All-Area First Team (2018-19) … Recipient of the of the 2019 Swimming & Diving Leadership Award … Dove for the Gator Dive Club (2017-20) … Brother, Ryan, was a member of the baseball team at Swarthmore College (2016-20) … In the classroom, received the AP Scholar with Distinction Award and member of the National Honor Society.

Isabella Wylie
Free / Fly
Scottsdale, Ariz. / Paradise Valley
Prior to Georgetown: Four-year member of the Paradise Valley High School swimming & diving team … Qualified for state championships all four years, including reaching the podium in the 50- and 100-yard freestyle and the 100-yard butterfly … Holds the Paradise Valley record in the 50 Free, 100 Free and 100 Fly … Swam for the Scottsdale Aquatic Club National Team … In the classroom, was an AP Scholar … Won the Food Network’s Chopped Junior in 2016.