How Much Did 5th Years Impact the 2022 NCAA Championships? 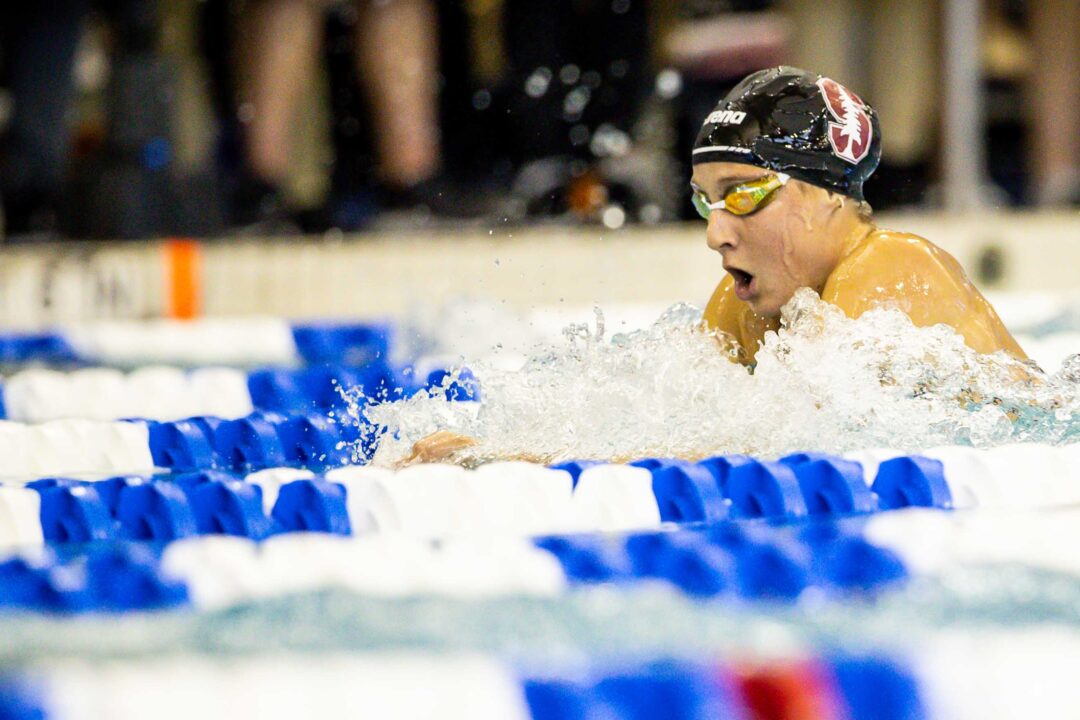 Stanford's Brooke Forde was one of just a handful of 5th year swimmers who scored more points at this year's NCAA Championship meet than last year's. Archive photo via Jack Spitser/Spitser Photography

The 2022 NCAA Swimming & Diving Championships were unlike any other for a lot of reasons. One glaring reason, and one that might have contributed to the unbelievable depth that was present, is that for the first time, swimmers had the option to receive a 5th season of eligibility.

The waiver was granted by the NCAA for athletes who participated in the 2020-2021 COVID-19-ravaged season as a carrot to keep schools from canceling their seasons in order to avoid the disruptions and preserve eligibility.

While this year saw quite a few big-name swimmers, that will taper off in future years for two primary reasons:

We wanted to look at some of the ways that these 5th year’s impacted last week’s NCAA Championships. Below is data and discussion of those 5th years and the ways they impacted the meet.

Note: Penn and Arizona State both listed their seniors as 5th years, even though they didn’t compete last year. For the purpose of this analysis, we have relisted them as seniors because it is their fourth season of eligibility. Arizona lists Aria Bernal (5 points) as a 5th year, but as far as we can tell, this was only her 4th year of eligibility. We have moved her to the senior grouping as well.

The picture is clear on the women’s side of the pool: the 5th year experiment was not overall a successful one. Out of 22 5th years who we identified that swam individual events, only two scored more points than they did last season: Stanford’s Brooke Forde (40 points to 44 points) and Kentucky’s Bailey Bonnett (7 to 19).

In total, this group of women scored 130 fewer individual points than they did last year at the NCAA Championships.

The top performer of the group was Forde as part of Stanford’s 3rd place team finish. She finished 4th in the 500 free, 2nd in the 400 IM, and 4th in the 200 breast. Texas’ Evie Pfiefer scored 29 points, led by a 5th-place finish in the 500 free: a race that she was 2nd in last year. She was about two seconds better in that race last year than she was this year.

Part of this was probably influenced by a monster freshman class nation-wide, but seniors in general did well too. At the end of the day, only 8 swimmers using their 5th year of eligibility scored at the NCAA Championships, so their impact wasn’t completely for naught, but it wasn’t gigantic either. Crucially was this: without Pfeiffer’s 29 points, Texas doesn’t finish 6.5 points ahead of Stanford for 2nd place.

Virginia didn’t bring back any 5th years (men or women) this season and still managed to win the women’s title. They also had the most freshman points of any team (123) and the fewest senior points among the top 5 (26), which means they’re going to be very hard to beat again next season.

Texas lists Cameron Auchinachie as a 5th year, except he didn’t actually race last season at Denver. We’re not sure if there’s a wrinkle that meant he burned a year of eligibility at Denver anyway, but for the purposes of this analysis, we’re treating him as a senior.

There were four 5th year swimmers who scored at least 20 points at this year’s meet: Nicolas Albiero, Trenton Julian, Brooks Fail, and Daniel Carr. All scored fewer points this season than they did last season at NCAAs.

On net, 22 men that we registered as 5th years moved down 96 points from last year to this year.

A lot of them were concentrated in a couple of events, so those events were definitely impacted. The 100 backstroke, for example, had four 5th-year seniors in the B Final, and the 3rd-4th-5th place finishers in the 200 fly were also 5th year seniors.

In some races, they definitely shaped the results and the cut lines. For example, that 3:39 from Wisconsin’s Caleb Aman that infamously finished 9th would have been 7th if it weren’t for 5th year seniors. A 3:40.15 would have been the first time out of the A Final – still historically fast, but without the same pop as a “3:39 misses A final” headline.

But in other races they mattered less, at least directly.

There were a few odd circumstances in play here though: one of the 5th year seniors, Bruno Blaskovic, suffered a serious back injury that kept him out of most of last season. It’s possible that he would have been granted an eligibility extension by the NCAA anyway.

One of two things must be true: either the COVID year impacted seniors (broad strokes) less than other classes last year, so their relative finishes were higher, or the more likely explanation that the 5th year wasn’t as electric as it was expected to be.

Sometimes we ignore the human element of this all, the mentality of an athlete who has gone through four years with a plan and a class, and then trying to stretch that out one more year doesn’t necessarily mean a progression forward.

I think back to my high school or college years, blasting nostalgic John Mayer songs, soaking up those last few moments before moving forward to the next part of our lives. I think that if I had stuck around for a 5th year, that sort of “senioritis,” with all of its goods and bads, would have faded, and I might have been left feeling a little emptier, a little less motivated, ready to move on.

I think that’s why so many of the American swimmers who skipped college and tried to go pro straight out of high school have been a bust to. It breaks the natural cultural cycle that is so ingrained into the American educational system. The group of athletes that you came up with, that you arrived with and were bonded with through shared experience, move on, and you stay. That bond can’t really be recreated given the intensity of the collegiate athletics experience.

I think my ultimate conclusion is that four years of collegiate eligibility is the right number, and I’ll be glad when this waiver expires and no longer clogs the pipes of the NCAA.

Graduate studies may also be more likely to have atypical / non-traditional “class” schedules than the 17 available time slots for Differential Equations, Public Speaking, and/or Physics II. As in… here’s your one time slot for the mandatory recitation at 6:30pm on Mondays and Thursday, take it or leave it. I specifically remember each year of college swimming practice schedules for me and my peers getting progressively more painful as the number of alternate / conflict workouts seemed to increase when your advanced classes had fewer time options and painfully ran into traditional swim practice time blocks. Training with 8 exhausted teammates instead of 40 a few mornings per week can start to take a toll… Read more »

Brooke Forde isn’t the only female to score more points this year, you forgot Bailey Bonnett.

And 5yrs had impact on some relay finishes as well…

I think another approach that I would love to see is how it impacts team scores. i.e CAL had several scoring 5th years (4 total), does that change the final score to Texas’ only 1?
Essentially rescoring the meet removing 5th years and assuming the prelims times are repeating for B finals and B final swims are repeated if moved up to A finals.

Let’s face it, no one swims to get rich. If you were top 16 in the nation in Basketball or Football, you will most likely be making a million dollars within a year of getting out of college. For swimming, it’s likely maybe 3 of the top 16 at NCAAs will ever be able to earn a “living” on swimming alone, and perhaps one in that group has a shot of getting mainstream recognition if they perform at the Olympics.

Any 5th year is most likely staying for love of their team, and the realization that it’s one year of time for a lifetime of memories

I believe Aria Bernal has only used 4 (straight) years of eligibility, why was she counted as a 5th year?

Hmmm not sure. Arizona has her listed as a 5th year, but your math checks out.

Will move her in the data while I wait for Arizona to clarify.

It explains why if you read it.

I don’t know why I add notes on the data if you guys aren’t going to bother to read them.

“Texas lists Cameron Auchinachie as a 5th year, except he didn’t actually race last season at Denver. We’re not sure if there’s a wrinkle that meant he burned a year of eligibility at Denver anyway, but for the purposes of this analysis, we’re treating him as a senior.”

This was only his 4th season of actual racing.

I’m so sorry about people like this, but I promise there’s at least some of us who care to read all the details

Really stoked for him with his breakthrough season. I always thought it was cool that a mid major school has such a fast 1-2 punch with him and Sid Farber. But does anyone know why he didn’t swim that fourth year at Denver, or when he entered the transfer portal, etc.?

6
0
Reply
mens ncaa> every other sport
Reply to  CACRUSHERS

I think there was something on SwimSwam where the Denver team had huge covid violations because of a party and the most of the team got suspended (which brought the start of the season to Jan 2021). Ig he just never swam after that.

A lot of members of the team expressed unhappiness with how that went down, and a lot of them didn’t return to the team.