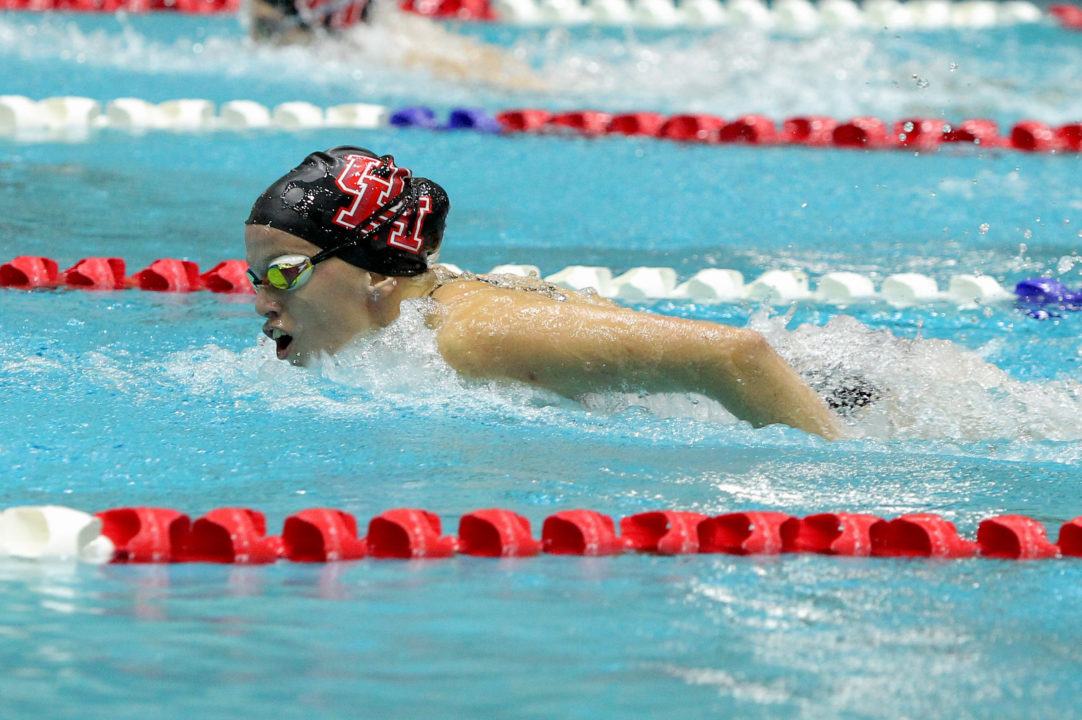 The Houston Cougars downed SMU in an in-state matchup on Wednesday, October 23rd. Houston won 11 of 16 events, also swimming the last event exhibition (not for points). Sam Medlin (Houston) was a double event winner, sweeping the distance freestyles. Medlin kicked off her day with a 10:15.44, which was a season best by 14 seconds. Medlin went on to win the 500 free, touching in 5:01.23. That time came in well of Medlin’s season best of 4:53.91, which she swam against Tulane earlier this month. Medlin also provided a 52.24 on the 3rd leg of the Houston A 400 free relay. The relay swam exhibition, but was the fastest in the field. Mykenzie Leehy led the squad off in 52.37, and was followed by Zarena Brown (51.11), Medlin, and Hanna Blewett (51.65) for a final time of 3:27.37.

Houston’s Ionna Sacha was another double event winner, sweeping the backstroeks. Sacha posted a 55.24 in the 100 back, out-pacing teammate Laura Laderoute (55.51). Sacha then swam a 1:58.98 in the 200 back, clearing the field by over 3 seconds.

HOUSTON – The University of Houston Swimming & Diving program defeated SMU on Wednesday afternoon at the Campus Recreation & Wellness Center in a 190-104 decision.

UP NEXT
Houston will travel to Florida Gulf Coast on Nov. 1-2, before preparing for the Phill Hansel Invitational Nov. 21-23 at the CRWC.

Trahan and Grossklaus swept butterfly events for SMU, with Trahan taking the 100 distance at 55.44 and Grossklaus clocking in at 2:03.40 in the 200. Grobler closed out individual events with a victory in the 200 IM, covering the distance in 2:04.05.

In her second event as a Mustang, Stambo led the divers with a win on 1 meter and an NCAA Zone score of 282.60. It was the second time the freshman hit the Zone qualifying mark this season, after doing so at the season-opening SMU Classic earlier this month.

All four divers achieved at least one Zone qualifying mark at the event, with Taylor Ohlhauser doing so on 1 meter (267.23) with her runner-up performance and Katie Crown (284.70) and Johanna Holloway (281.33) hitting the mark on 3 meter.

Other notable performances included a second-place finish from Felicia Anderson, Grobler, Trahan and Sam Smith in the opening 200-yard medley relay, as well as runner-up finishes from newcomers Frederica Kizek in the 1,000-yard freestyle and Janelle Gursoy in the 200-yard freestyle.

In the final team totals, Houston outscored the Mustangs, 190-104.

The Mustangs are back in action Friday when they travel across the Metroplex to face TCU. Diving action begins at 11 a.m. with swimming to follow at 1 p.m.