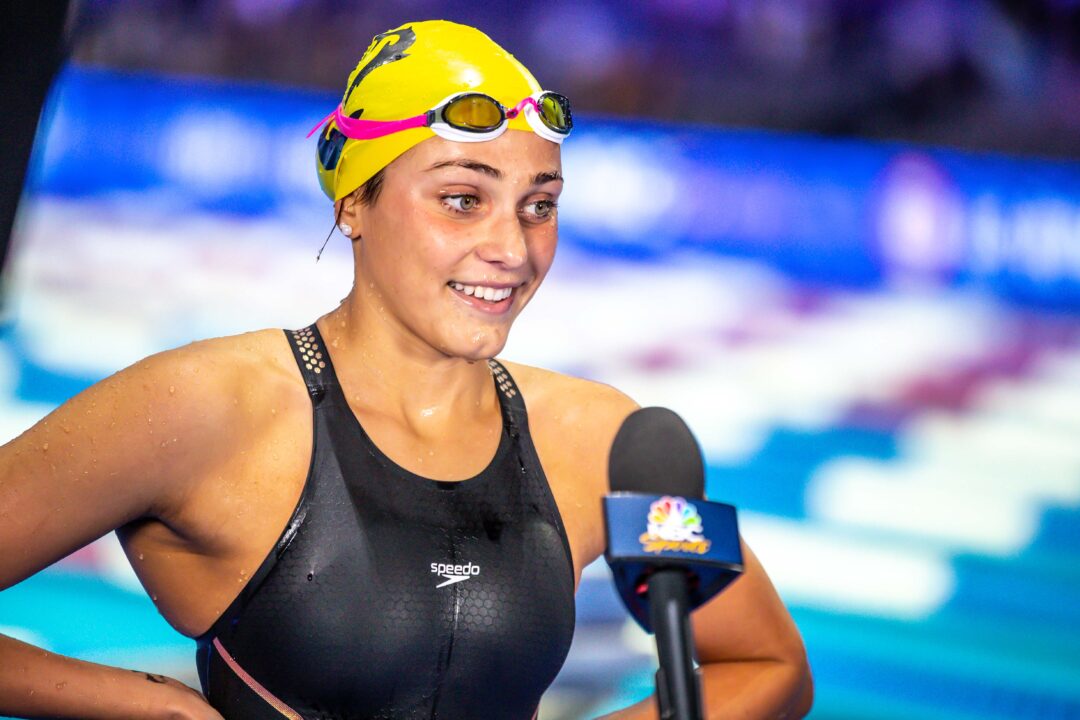 Weyant's time would have finished fifth at US International Team Trials in April, an event she finished 12th in there. Archive photo via Jack Spitser/Spitser Photography

NC State commit Michael Cotter of TAC Titans swam a best time in his 200 IM touching in a winning time of 2:01.27. Cotter won the event by almost three seconds. That was a best time for Cotter as his previous best stood at a 2:01.98 which he swam in April to finish 18th at US International Team Trials.

With the largest win of the night, Hannah Bellard of Club Wolverine picked up a win in the women’s 1500 free. Bellard swam a time of 16:43.57, winning the event by over 23 seconds. That also was a huge best time for the Michigan 2023 commit as her previous best stood at a 16:56.68 from April of this year.

Although the women’s distance event had the largest win of the night, the men’s 800 free was a tight battle. Jack Callan of Michigan won in a 8:12.10 finishing just head of Amadeusz Knop of Sarasota Sharks who touched in a 8:12.45. Notably, they finished eight seconds ahead of the rest of the competition. Both swimmers went best times by at least three seconds.

16 year old Addison Sauickie of Sarasota Sharks picked up another win at the meet in the 50 free. Sauickie won in a 25.49 a huge improvement from her previous best of 26.26 which she swam earlier this summer. Notably, her best time last year was a 26.59 so she has now dropped over a second in the last year.

Florida’s Macguire McDuff won the men’s 50 free in a 22.44. That was a best time for McDuff as his previous best stood at a 22.67 which he swam in prelims at to finish 16th at US International Team Trials. His time here would have finished 11th.

Julia Podkoscielny of Pine Crest Swimming won the women’s 200 back in a 2:13.86. The Florida commit has a best time of 2:12.42 in the event. She will be representing the US at Junior Pan Pacs later in August.

Also worth noting that her teammate, Addison Sauickie, who is more of a middle distance freestyle specialist had a huge breakthrough swim in the 50 going 25.49

I guess I should read the article before I write something like this. My bad:)