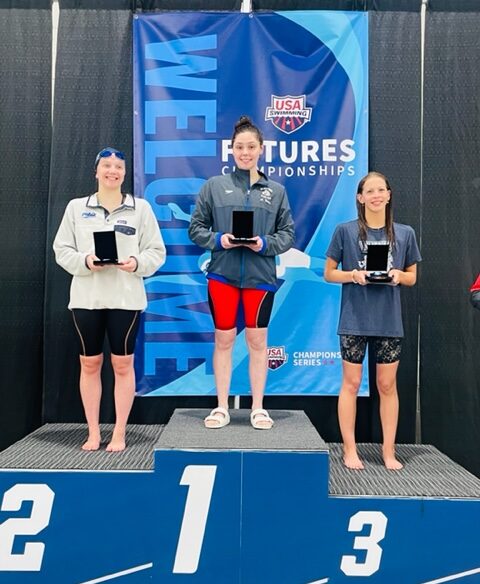 Also highlighting the night was UNC commit (2022) Aislin Farris of Bluefish picking up a win in the women's 200 IM with a 2:18.10 pictured above. Current photo via CARLEANNE FIERRO

King was not the only 15 year old to pick up a win on the night as Alexander Parent won the men’s 800 free in a 8:20.43, winning by over two seconds. That was almost a seven second drop for the Bluefish swimmer as his previous best stood at a 8:27.30.

Fellow Bluefish teammate Aislin Farris picked up a win in the women’s 200 IM swimming a 2:18.10. That improved upon her previous best of 2:18.93 that she swam in December 2021. Farris is headed to UNC this fall.

Just missing the sub 2:00 mark was Gavin Currie in the men’s 200 back. Currie swam a 2:00.79 for the win, winning by over four seconds. Currie swims for Deleware and had a best time of 2:03.01 coming into the meet from earlier this summer.

Winning the men’s 50 free was Daniel Baltes of Ohio State. Baltes touched in a 22.91. That was much faster than his previous best of 23.68 which he swam just two weeks ago at Sectionals in Cleveland.

Speaking of swimmers named King, Abigail King hit a new pool record in the 200 breast (and a Phillips 66 nationals cut) with a 2:32 at age 14

We need this Lily to commit to IU and Lilly to swim for 3 more years just to see what would happen. Oh, and also Cody should vlog all the shenanigans.

I love that US has Lilly King and Lily King and Australia also has a young breaststroker named Tilly King.

Would have been a great race in Carey with Addison Sauickie going a 25.49….

This is confusing me so much.

King is on fire