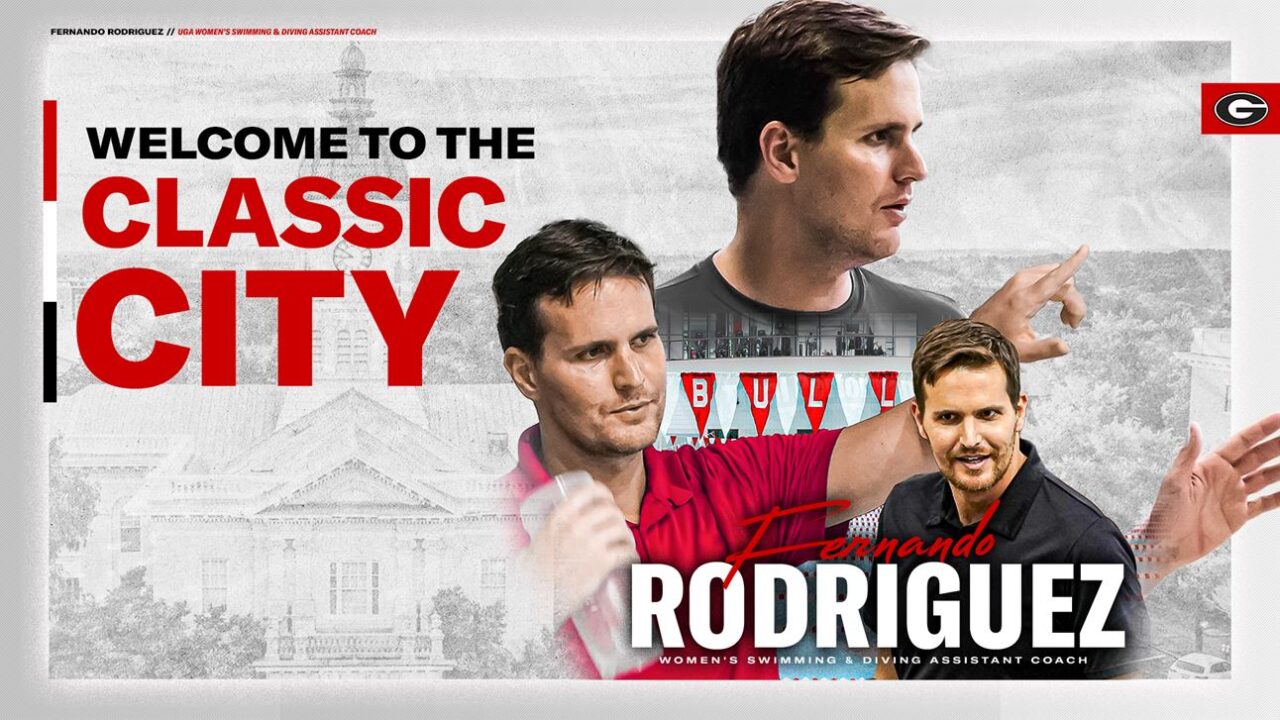 The University of Georgia swimming & diving program took another step into the post-Jack Baurle era on Thursday with the... Archive photo via Georgia Athletics

The University of Georgia swimming & diving program took another step into the post-Jack Baurle era on Thursday with the announcement of Fernando Rodriguez as a new assistant coach. He will assist Stefanie Williams Moreno, who in June was named the head coach of the newly-separated Georgia women’s program.

Bauerle announced his retirement in June after 43 years at the University of Georgia. That time period saw his teams earn an indescribable number of achievements, which includes 7 NCAA titles, 40 Olympic medals, and 304 All-Americans.

Upon Bauerle’s retirement, Georgia split their previously-combined team into separate men’s and women’s programs. Because of NCAA rules, that means that the program as a whole can now only have two paid assistants (one for men, one for women), versus the four paid assistants that they previously had.

With two associate head coaches besides those promoted left to fill those spots, the hiring of Rodriguez implies that either Brian Smith or Jerry Champer won’t return next season, at least in their prior roles. A Georgia athletics spokesperson has not responded for more information about the composition of the rest of the staff.

Rodriguez is a native of São Paulo, Brazil who did his undergraduate studies and competition at Division III superpower Kenyon College. As an athlete there, he was a seven-time All-American and a member of four consecutive NCAA Championship teams. He was a captain his senior year, and graduated in 2004 with a bachelor’s degree in Anthropology.

He would later return to Kenyon, where he has served as an assistant coach for the last eight years.

He first worked with the middle-distance group for six years followed by two years with the sprint group. While at Kenyon, he helped guide the Lords and Ladies to two NCAA Division III championships (2022 – women, 2015 – men) and five runner-up finishes, while also earning five North Coast Athletic Conference (NCAC) championships. Beyond the team accolades, his tenure produced 16 NCAA individual champions, 10 title-winning relays, and 20 NCAA records, as well as four CSCAA Swimmer of the Year honorees, including a sweep of this season’s awards by Bryan Fitzgerald and Crile Hart.

He also served as an assistant aquatics director at Kenyon’s pool.

“I am thrilled to welcome Fernando to our program as our assistant coach,” said Women’s Swimming and Diving Head Coach Stefanie Williams Moreno. “With his wealth of coaching experience, he is a perfect addition to our staff, and I am excited to share the pool deck. Through his work at Kenyon, he has helped mold a consistent culture of success both in and out of the water, producing numerous NCAA champions and postgraduate scholars. As a fellow Georgia graduate, Fernando knows what is expected here, and I have no doubt he will be a phenomenal teacher and role model for our young women, an excellent recruiter for our future student-athletes, and a tremendous ambassador for our university.”

Prior to Kenyon, Rodriguez spent one season as an assistant at Richmond, helping the Spiders’ women’s team win the 2014 Atlantic 10 Championship. He also served as an assistant coach and recruiting coordinator at Colgate (2013), William & Mary (2009-12), and Wabash College (2004-05). As a graduate student in Sport Management at Georgia from 2007-09, he was an assistant coach for the Athens Bulldog Swim Club senior and masters groups and assisted with the Jack Bauerle Bulldog Swimming Camp, along with his work as a graduate teaching assistant.

Fernando is an incredible coach and will be truly missed by Kenyon. Best wishes on your new endeavor Fernando!

The Georgia women got a great one! Fernando was instrumental in making me into the person and swimmer I am and Kenyon will surely miss him. But so excited for him, this is an awesome opportunity!!

Braden, how do you figure that a coach has to leave? With Jack’s departure, there was one opening, right? I thought they were allowed the same number of coaches combined as separate… 3 for women and 3 for men for 6 combined.

As explained in the article, separate coaching staffs have fewer coaching slots. A single gender program doesn’t get 2 assistants.

A fantastic coach and an even better person! The Georgia women are in great hands!