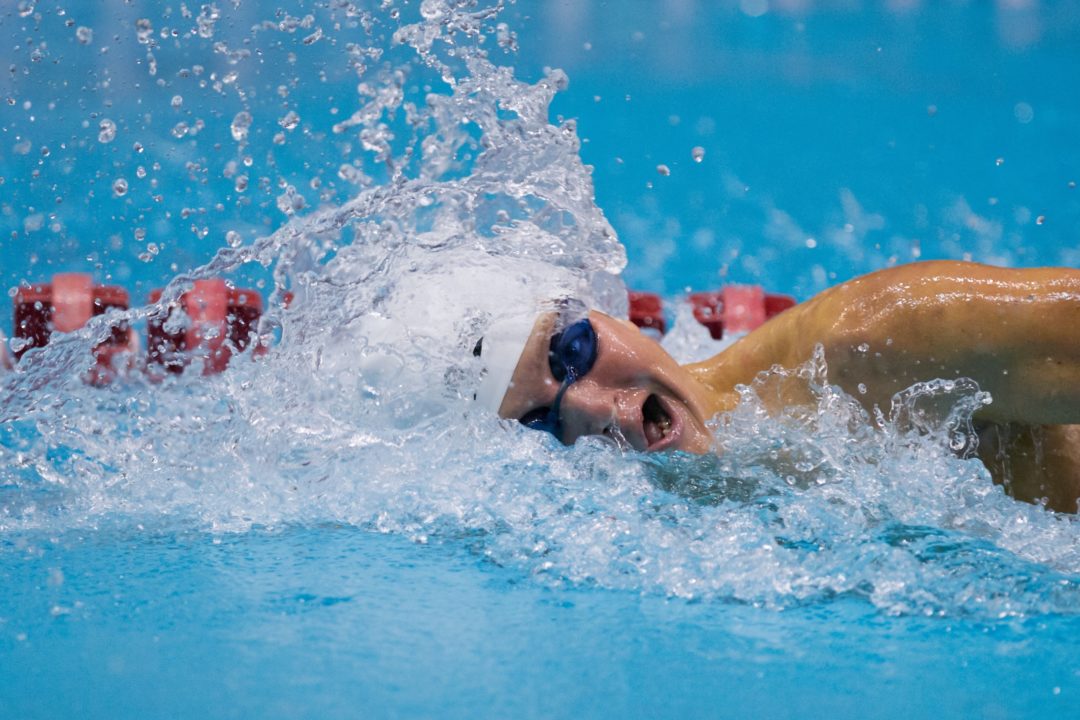 On Friday, as breaths were collectively being held in anticipation of the monstrous Bolles Boys, Florida’s largest, 3A schools did their thing in the YMCA Aquatic Center in Orlando, Florida. These schools are the biggest in the state, generally from 2,500 students to upward of 3,000 in enrollment, and the breadth of that talent pool leads to some very deep events.

Though most of the power in this biggest division is concentrated in the southern end of the state, Smiddy was the only 3A State Champion from Miami-Dade County: one of the biggest counties in the entire country. Not only did he win that 200 IM, he also took the state crown in the 100 fly in 50.29. There he out-raced a stacked field that saw the top 5 all dip under 51 seconds. That included St. Thomas’ Alex Lilley in 2nd in 50.35 and Taravella’s Keegan Boisson-Yates in 3rd in 50.45.

In fact, along with Timber Creek’s Quinn Poti (50.62), the top four swimmers in this race, and 6 of the top 7, were all seniors. That should leave 5th-place finisher Noah Hensley from Oviedo, sophomore, as the big favorite for next year’s title. His 50.75 was a two-second improvement from his freshman season already.

In sharp contrast to the veterans in that 100 fly, the 500 free showed off the great youth of Florida’s biggest schools. There were only two seniors that scored in the A-Final of the longest race on the high school schedule, plus only another one in the B-Final. The winner was the youngest of the whole lot, Nazar Boscaino from East Lake High School in the Tampa area. The freshman took the victory in 4:29.40, with a strong finish to pull ahead, and eventually away, from runner-up Taylor Uselis, a junior from Palm Harbor University High.

Boscaino’s brother Ludov was the only other freshman scorer in the race, as he was 14th in the final in 4:44.93.

The most exciting race of the night was the men’s 200 free. There Ryan McRae won in 1:37.67, but after taking a big lead on the first 50 yards (a full second), Riverview’s Alexander Katz started reeling him in. At the wall, though, that initial lead was all that McRae needed to hold on for the title. Katz took 2nd in 1:37.90, about three seconds better than the rest of the field.

Florida State commit Jason McCormick had a huge meet, marking 20.43 to win the 50 free ahead of fellow Boca Raton senior Sam Corona (21.04). McCormick also put up a 45.07 to win the 100. Those amounted to drops of four-tenths and nine-tenths, respectively, in the two distances.

With such depth in their sprint group, it’s no surprise that Boca Raton swept all three relays. First, Alejandro Vassallo, Steven Vergona, Kevin Matheus, and Corona put up a 1:34.60 in the 200 medley relay. A quick 22.59 from the senior Mathus pulled Boca ahead of runners-up Seminole (1:35.29) and third-place finisher Palm Harbor (1:35.35).

Boca Raton, carrying over only Corona from that relay, also won the 200 free relay  in 1:23.79. The combination of Gage Kohner, Corona, Nicholas van Zee, and McCormick (the last two in 20.8 and 20.6, respectively) blew away again runners-up Seminole. That also made them by far the second-best relay from across the three divisions behind only, of course, National Record breakers Bolles.

The other individual winner on the day was Seminole senior Matt Ankerholzin 56.45, as her sped away from Timber Creek junior Alex Kimpel (57.30) on the second 50.

The powers on the girls’ side of 3A are vastly different than they are on the boys’ side. For example, as the Boca Raton boys won, the Boca Raton girls didn’t score a single point, and only girls champions Sarasota-Riverview were able to place in the top 5 of both genders.

Any time we’re talking Sarasota, the conversation has to start with their distance swimmers. Florida commit Taylor Katz took the win in the 500 free in 4:45.27, and she combined with two of her club teammates at the Sarasota YMCA to take three of the top four spots (Hannah James in 3rd in 4:49.80, also a high school teammate, and Cameron Davis in 4th in 4:45.25 for Sarasota High School).

In fact, taking it a step further, the 500 free in all three levels of Florida’s State Championships (Danielle Valley 2A, Ellen Berdusco 1A) were won by members of Steve Brown’s YMCA squad. The focus of high school is mostly on the high school teams, but that level of achievement by one club can’t go unnoticed.

The lone infiltrater in the top 4 of this 500 was Kentucky commit Kendal Casey of Spruce Creek, who took 2nd in 4:48.11 (her club team is Steve Lochte’s Daytona Beach).

In the girls’ 200 IM, sophomore Sydney Pickrem won in 2:01.40. though she lives and swims for East Lake, she’s a Canadian representative internationally. This swim is far from her best time, but she may be focused on a legitimate chance at World Championship qualifying at March’s Canadian Worlds trials (plus there was virtually no competition for her in this race).

Pickrem was better in her other individual event, the 100 back, with a 55.38, but that only earned her 2nd-place points. The title in that race went to Newsome sophomore Maddie Hess in 55.01. Hess made a ton of progress in the summer long course season and easily converted that to yards here: she’s dropped two-and-a-half seconds since winning the B-Final as a freshman last season.

Hess added a second win with a 50.88 in the 100 free, followed closely by Palmetto senior Danielle Johnson in 51.16. Hess and Pickrem should be the stars of this meet for the next two years.

Also notable in that 100 free, Coral Reef seniors Khamai Simpson (52.67) and Carla Robles (53.08) were the only teammates that were able to score in the always-tight 100 freestyle. Interesting, Coral Reef chose to swim both of them in the 200 yard relays, where they’re not quite as good as they are in the longer 100.

Plant sophomore Alexandria Donahue won the women’s 100 breaststroke in 1:03.81, giving her the win by more than a second ahead of St. Petersburg junior McKenna Harris (1:05.23).

Unlike the boys’ meet, Riverside only won a single relay en route to their state title. That was the meet-ending 400 free relay, though with the scoring battle out of contention, in 3:28.78, with the combination of Katz, James, Spence Atkins, and Niamh O’Grady. Katz got the Highlanders off t a big lead with a 51.01 leadoff, and then when her fellow distance swimmer James put up a 51.59 on the 2nd-leg, the relay was about over. Only Katz graduates from that relay.

In the first two relays, it was Hess who gave Newsome a great leadoff that nobody could touch. Though Plant made up ground on almost every leg, the margin from Hess’ 26.64 leadoff was too much to overcome. Other members of the winning relay, in 1:46.94, were Barbara Caraballo, Karisa Kostecki, and Lauren Harper. Plant was 2nd in 1:47.07.

And lastly, it was Dr. Phillips that took the 200 free relay with Cindy Cheng, Emily Kliewer, Alexandria Magrino, and a 22.88 from Angela Algee on the anchor.