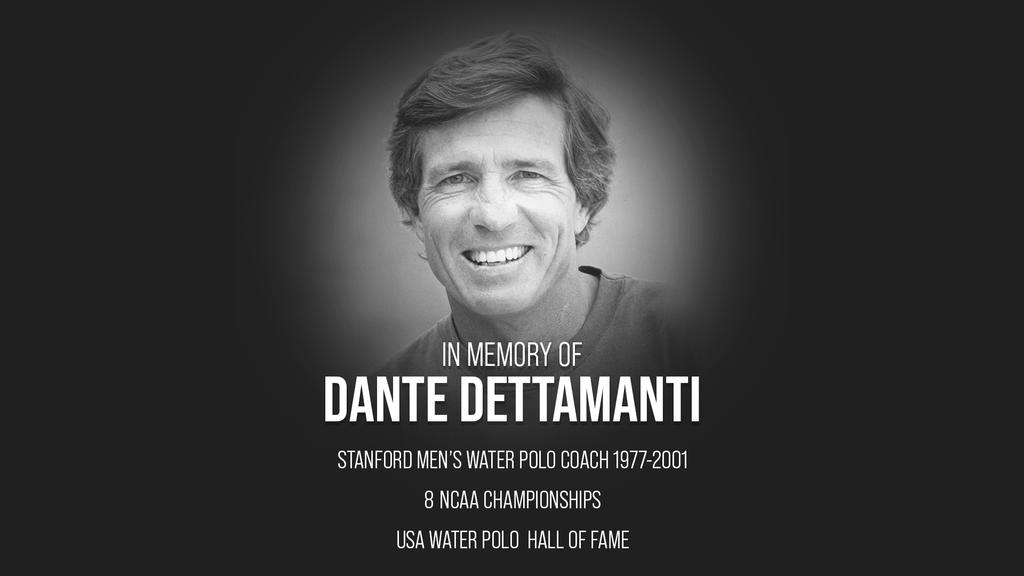 Former Stanford coach and USA Water Polo Hall of Famer Dante Dettamanti died in a bicycle crash on Oct. 25th at the age of 80. Archive photo via Stanford Athletics

Dettamanti coached the Stanford men’s water polo program from 1977 until 2001, announcing his retirement after the 2000-01 NCAA season. During his 25 years with the Cardinal, Dettamanti led the water polo team to eight NCAA Championship titles and 14 title-contending matches. He is one of five head coaches in Stanford Athletics history to claim at least eight NCAA titles. Dettamanti is the second collegiate coach in NCAA history to record over 600 career wins and the only collegiate coach to win NCAA championships in four different decades.

In recognition of his accomplishments, Dettamanti was a six-time NCAA Coach of the Year and ten-time League Coach of the Year. On the international stage, he coached the USA World University Games teams to gold and silver medals in 1979 and 1981, respectively. He coached athletes who succeeded beyond their NCAA careers, including five-time Olympian Tony Azevedo, three-time Olympian Wolf Wigo, and two-time Olympian Jody Campbell.

As a result of his contributions, Dettamanti was inducted into the USA Water Polo Hall of Fame in 2002.

Prior to his coaching stint at Stanford, Dettamanti coached at UC Santa Barbara and Occidental College and served as a graduate assistant at UCLA while pursuing his master’s in exercise physiology. As an undergrad, Dettamanti swam and played water polo at UC Davis, where he earned a degree in engineering.

He continued his athletic career after college by committing to the sport of triathlon. Many claim Dettamanti to be one of the original pioneers in triathlon after he placed sixth in the highly esteemed Hawaii Ironman World Championships in 1981.

Brian Flacks, the Dunlevie Family Director of Men’s Water Polo, shared his condolences, saying, “It’s hard to imagine any other coach having such a profound impact on their athletes, colleagues, and community.

“Undoubtedly, Dante will go down as one of the all-time greats, but his impact was much greater than any win in the pool. He will be deeply missed.”