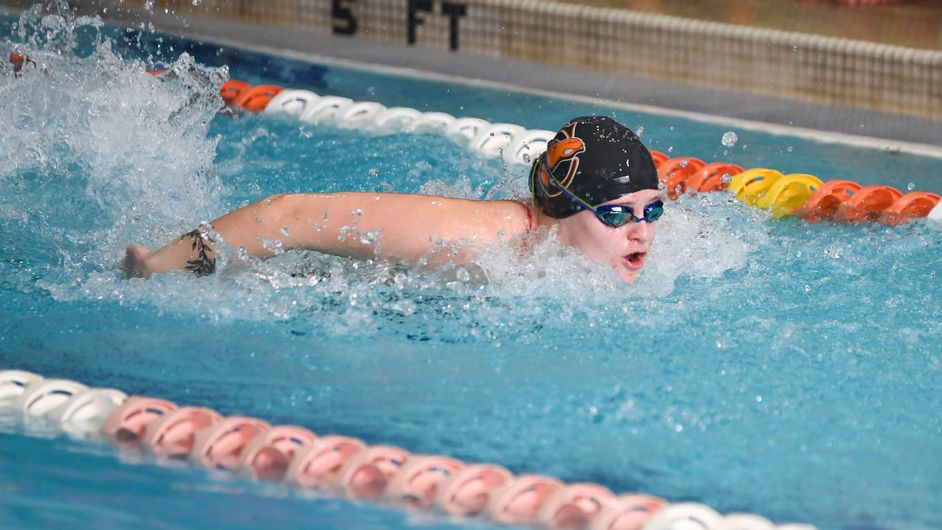 Campbell also got it done in comeback fashion last year, battling back from third place on the final day of competition. The Flames won 16 of the 18 total events contested in Lynchburg, Virginia, but it still wasn’t enough for the home team.

This year, the Camels put together a clutch performance in the 200 back, placing six swimmers in the A-final and securing two of the top three spots in the race. Angelica Ragazzoni clocked a 2:00.43 to win the 200 back while Laura Lopez took third in 2:01.85, Ragazzoni, a freshman from Rome, Italy, went five seconds faster than her previous best from three weeks ago.

Campbell put a whopping six swimmers into the A final of that 200 back, which makes up a ton of points in a hurry.

Liberty’s Abbie Shaw triumphed in her second individual event of the weekend with a 51.10 in the 100 free, followed by two Campbell swimmers on the podium in Colleen Renshaw (51.26) and Meredith Ashburn (51.37). Camels junior Izza Gaskey placed third in the 200 breast with a time of 2:19.34, and Campbell’s 400 free relay squads closed out the meet by taking second (3:25.62) and third place in the final.

The Flames got their night started on the right foot in the mile, where freshman Eden Troxell shaved 20 seconds off her lifetime best to win in 16:54.63. The massive drop moved her up to fifth all-time in Liberty’s program record books. She also posted a 1000 free split of 10:12.23 during the race, which ranks sixth in school history. Classmate Isabelle Gomez earned a runner-up finish in 17:10.31 while Campbell’s Katarina Gagnon rounded out the podium with a 17:17.77. Nine different Flames tallied individual wins, with Grace Isaacs (400 IM, 200 fly) and Shaw (100 back, 100 free) claiming multiple during the three-day affair.

The Camels will now enjoy nearly two months off before the spring’s first event, a home meet against North Florida on Jan. 14. Some Liberty swimmers aren’t quite done for the holidays yet with obligations at the 2022 U.S. Open from Nov. 30 through Dec. 3 at the Greensboro Aquatic Center in North Carolina. The Flames’ next dual meet is set for Jan. 7 at East Carolina.

We’ve been through this before
https://www.swimmingworldmagazine.com/news/2022-ccsa-swimming-championships-liberty-claims-fourth-consecutive-title/

I thought Liberty had a strong team, with lots of depth. Guess I was wrong.

They are a strong team. It’s about swimming fast when it matters most. They are gracious competitors.

6 Camels in the 200 BK A-Final makes a lot of points! #SailsUpCamels

But did the pool boy watch?

This just in: Liberty coach Jake Shellenberger has alleged fraud and claims the invite was stolen

Full disclosure here, Liberty U did have a full weight room session just prior to finals on the last night. #FullTilt #GoLU #CoachShell

Did they tie the weights to their backs while swimming too?