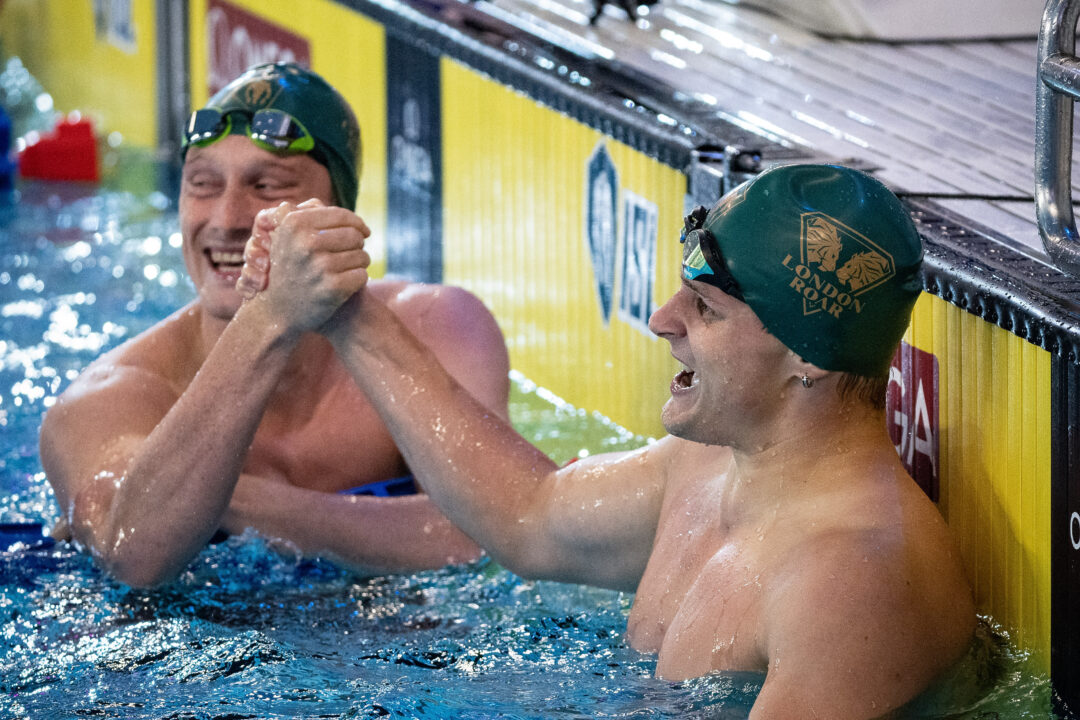 For the first time in the history of the ISL, jackpot points decided the winner of Match 8, favoring Energy Standard over the London Roar. Current photo via Giorgio Scala/Deepbluemedia

Thank you to Barry Revzin who contributed to this report by compiling the data shown in the in-depth points analyses.

Match 8 of the third season of the International Swimming League showcased a close battle for 1st between Energy Standard and London Roar, as well as a back-and-forth fight for 3rd between the LA Current and the Tokyo Frog Kings. Ultimately, Energy Standard came out on top and produced the Match MVP, Ilya Shymanovich, who earned 64 points total. LA’s Ingrid Wilm came out 2nd in the MVP standings with 57 points, London’s Duncan Scott was 3rd with 52 points, while Tokyo’s Daiya Seto and London’s Emma McKeon tied for 4th with 47.5 points.

The final team standings came out as we expected. Remove the jackpot points and Tokyo cuts its deficit to LA in half, but they still come out in 4th.

The skins proved wildly successful for the LA Current who more than doubled the score of every other team except London Roar thanks to strong performances from Ingrid Wilm and Tom Shields.

The Tokyo Frog Kings were the big winners in the checkpoint game though, thanks largely to Daiya Seto‘s dominant performance in the men’s 400 IM, though Paige Madden also contributed to this haul with strong swims in both the 400 freestyle and 400 IM. Madden didn’t win either race, placing 2nd and 5th, respectively, though she still earned the 2nd-most points of any competitor in both races, thanks to the checkpoints.

For the first time in the history of the ISL, jackpot points decided the winner of Match 8, favoring Energy Standard over the London Roar. If the jackpot points are removed then the London Roar would have actually beaten Energy Standard by the narrow margin of 11.5 points. Neither team received enough penalty deductions to sway the outcome, and their checkpoint points nearly even out.

Until Match 8, jackpot points had only affected the outcome of Match MVPs, but now their value to overall team standings is on display. A point brought up by Barry is that every time 4 or more swimmers get jackpotted, the winner of the race is now up 19 points, more than 2 individual wins. These point swings could affect how a team builds its roster, preferring big stars to a team with depth.

There are only two matches remaining in the regular season, as well as the “play-in” match where the bottom-4 teams will duke it out for the final two spots in the play-offs.

We already know that the Cali Condors and the LA Current have earned their spots in the play-offs and are done with their regular seasons, having swum four matches each. Energy Standard has one match remaining, but they are mathematically guaranteed to advance, even if they get fourth in their final match–they won’t get fourth in Match 9.

London and Toronto are also guaranteed a spot in the semi-finals, which means only one more team can earn an automatic qualification to Eindhoven. At present, the Aqua Centurions are ranked 6th, though Team Iron and the Tokyo Frog Kings each have a legitimate shot at knocking them down a rung over the course of the next two matches. The DC Trident and the New York Breakers are guaranteed to swim in Match 11, though which of the other three joins them remains up in the air.

Which teams still have swimmers to bring in for the playoffs and/or final?

in terms of people averaging 0.0 (no guarantees they all come back, didn’t check if they’ve been In Naples and just didn’t score):

Eddie Wang in for Cali as well

I hope to see Flickinger back in!

Roar will bring in Prigoda and C1 for sure.
They may also bring in Peaty but I don’t know if that’s confirmed. Roar almost certainly win this match if they have either Peaty or Prigoda. Shymanovich was MVP and it’s very likely he loses a huge chunk of points.

Having seen the initial reception to Peary on strictly come dancing last night, he’s not appearing before the final even though London desperately need to improve make breast.

The article says that LA doubled points of the other teams in skins except ES. But I’m pretty sure Roar got more points than ES in skins. Before skins, Roar was 25 points behind, but finished 20.5 points behind?

I maintain that jackpot points and skins points are silly. Sometimes a swimmer will get a huge boost from a jackpot because other swimmers DNS or DQ or just have a really bad swim. Like, why should the winner of a race automatically get more points because someone else DQ’d? Doesn’t make sense to me.

And the fact that winning all three skins rounds, assuming no jackpot, is worth almost 4x any other event (possibly a lot more than that with… Read more »

If you look at what happened with jackpots in the MMR LON basically got punished for TOK and LAC s-ucking.

Interesting to see London would have won without the jackpot even more interesting was getting to overhear a conversation from ES coaches where Gibson was complaining about the jackpot after Akitsons win in the 50 breast. I doubt he’d been complaining now considering it is the reason they won

Gibson was right tho. The jackpots are a stupid distortion of the scoring system.

I agree it does take away the strategy of what swimmers to use or how to sort relays because you can load one team and just try to jackpot the field to gain points instead of strategically balancing teams.

I think this is particularly true of the freestyle relays. With restrictions on squad sizes no teams really have the depth to field 8 good 100 freestylers, and with jackpot time differences being smaller this season pretty much everyone is just loading their A team and accepting the high likelihood of their B team being jackpotted.

I’m curious who made this rule

Personally I don’t think jackpots add excitement to the match for example look at LA and Tokyo if they keep getting jackpotted by London or energy how do they close the gap on each other, their just left unable to do anything, it takes away the enjoyment for the teams that aren’t in contention for winning because there swims become useless if they keep getting jackpotted even if they are finishing ahead of each other the jackpot just overrules any attempt in progress

Jackpots are the three-pointers of ISL

Not the best analogy: 3-pointers are not opportunistic, nor do they encouraging tanking like jackpots.

8
0
Reply
Just give the trophy to the condors already

Wild idea of jackpot that popped into my mind last night: I wonder if there is a difference of, instead of the swimmers being jackpotted of their points entirely, we instead have that the swimmers jackpotted get to keep their points while the winner will still earn the bonus so for example if a winner jackpotted the 5th – 8th, the winner will get 9 + 4 + 3 + 2 + 1 = 19 points while the 5th – 8th still keep their points provided they hit the standard time. That way big winners get rewarded but the slower ones don’t get necessarily punished for being much slower than the OP ones.

I agree there needs to be some incentive to winning by a large margin. In season 1, there were too many races where top swimmers “loafed” a victory. On the other hand, we are seeing clubs throw in a second swimmers they know will be jackpotted when they’re confident their other swimmer will win. Your system may be the right balance.