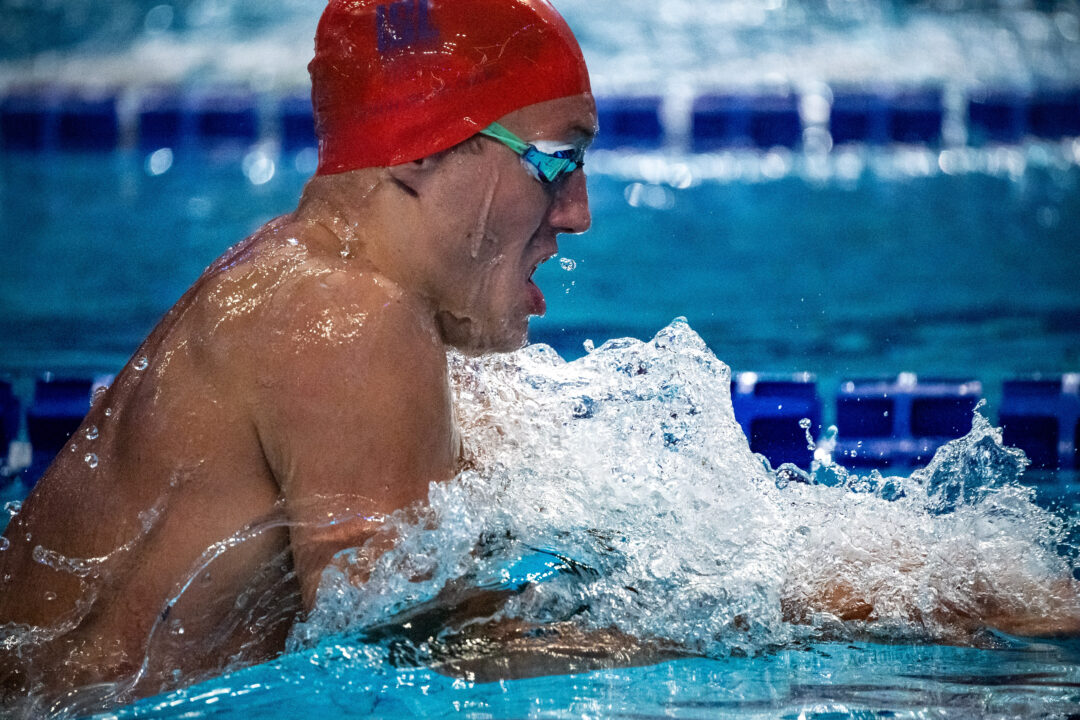 Energy Standard’s team of Evgeny Rylov, Ilya Shymanovich, Anastasiya Shkurdai, and Sarah Sjostrom cut nearly 2 seconds from the ISL Record in the 4 x 100 mixed medley relay, posting a 3.31.96. The previous ISL Record stood at 3:33.81, set by the LA Current in Match 4 of season 3 in Naples, Italy. Energy Standard’s swim was a huge jackpot, reeling in 38 points, while Energy’s ‘B’ team placed 3rd for 12 points giving them 50 points total in the race. London earned 24 points total in the mixed medley relay while the LA Current and the Tokyo Frog Kings were shut out completely.

While both teams used a man on the breaststroke and a woman on the freestyle, they differed in that Energy Standard used a man on backstroke while LA used a woman, and Energy Standard used a woman on butterfly while LA used a man. Though there is a lot to be said for the strategy of this relay the most competitive teams have tended to use men on the breaststroke leg and anchor with a woman on the freestyle, as both teams did in each of their record-setting performances in Naples.

The mixed medley relay is new in the ISL schedule in season 3 and replaces the mixed 4 x 100 freestyle relay which was contested in both seasons 1 and 2. Therefor, the 4 x 100 mixed medley relay has only been swum 8 times in ISL competition.

FINA does not recognize a World Record in this race, instead only recognizing mixed records for the 4 x 50 medley relay and 4 x 50 freestyle relay as those races are contested at the FINA World Championships (short course) as well as at the short course European Championships. Even so, Energy Standard’s team was comprised of swimmers from three different nations (two from Belarus, one from Russia, and one from Sweden). The LA Current’s team also consisted of swimmers from three different nations, meaning both swims would not be eligible as World Records, and instead would be considered a ‘World Best.’ Ilya Shymanovich posted a 55.39 on the breaststroke leg of the race which would rank as the 5th-fastest split in history, though as it comes in a mixed relay race it will not officially count. Only Shymanovich himself and Adam Peaty have been faster.

Very fast! As a side point, it has always bothered me that swimmers from different countries can’t set a relay world record. This rule makes it feel like only competing for your country or with your compatriots is considered a “real” team. As swimming (hopefully!) continues to professionalize, we shouldn’t care whether swimmers are swimming as part of their national teams or ISL “club teams”. Why do we even require swimmers to be swimming on behalf of a country when it’s not a country-based competition?

I think the rules are this way to avoid all the best swimmers teaming up as a super-team to smash a relay world record. Honestly, I see no problem with this whatsoever, but I also… Read more »

If that was possible the 4×100 would be impossible to beat. Take cielo Bernard bousquet Adrian 2009 we would have a 3:06 relay

This may be way off it comes down to where each swimmer would be at I’ve just based off performance between 2019-2021. This is my opinion of what we could see a head to head would go much different because the swimmers would be focused on racing not time but either way I think it could be an interesting race to watch. Even if Australia don’t win that depth is insane to come that close to four of the top swimmers which are all from different countries against four swimmers in one country.

i don’t see why that 4×100 would be impossible unless you think that men’s sprint freestyle will never be as fast as it was in 2009 ever again. Wait a couple years and a Dressel/Kolesnikov/Popovici/Chalmers team would give Cielo/Bernard/Bousquet/Adrian a serious run for their money

can you honestly imagine a reality where the swimmers would actually team up like this?

It could happen after a worlds Maybe.

None of those Americans would ever join an international relay to break a USA record.

It could happen even without US swimmers.. at 2009 you could take out Adrian and out Hayden in..

And for the medley, swap Dressel for Milak..

They should just have 2 WR’s for each relay. Club WR and country WR.

Imagine Stewart, peaty, dressel and cielo on a 4×100 as they have the fastest splits ever on scm (all textile)

Actually it would be shields at a 48.04 not dressel, at a 48.17. that’s why Cali would need him to drop an unbelievably fast split to have a chance at that relay. But to your point, yes that relay would be insane

“shields at 48.04, not dressel” you seem to have forgotten that dressel has literally gone 47.78 flat?