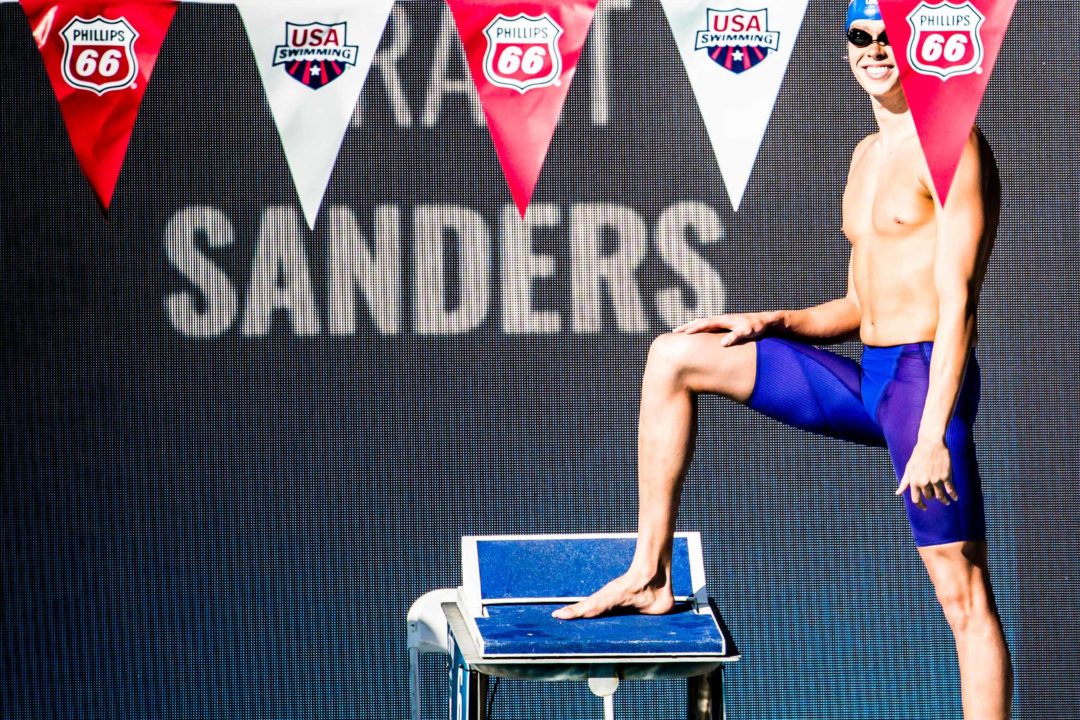 The reigning SEC Champion Florida swam a couple of lifetime bests. Grant Sanders broke 53 for the first time in the 100 breast. He dropped over half a second. Archive photo via Jack Spitser/Spitser Photography

The 2020 SEC Swimming and Diving Championships kicked off with swimming time trials on Tuesday morning. The title events will begin late today with the 200 medley relay and 800 free relay.

The Texas A&M men, who are in the hunt for their first ever team title, got off to a good start with freshman Jace Brown swimming a 200 fly time trial. Brown hit the wall in 1:44.45, knocking over a second off his best from midseason. He’s now dropped 3 seconds since joining the Aggies. That time is fast enough to have placed 11th in last season’s finals.

The reigning SEC Champion Florida men, who are battling for their 8th-straight title, got a couple of lifetime bests in time trials. Grant Sanders, an IM finalist, broke 53 for the first time in the 100 breast. He dropped over half a second in 52.95. That’s just a few tenths away from what qualified for last season’s championship final, but he likely won’t swim that individually as he’s a returning finalist in both IMs and the 200 breast. It does bode well for his 200 breast, where he’s the reigning bronze medalist.

The Gators also saw a lifetime best swim in the 100 back. Auburn’s David Crossland was over a second faster than his former season best in 47.06, just out-touching Florida’s Tyler Silver (47.07). That’s a best for Silver by 3 tenths.

LSU’s Brittany Thompson had a breakthrough swim in the 100 fly. She hadn’t matched her best time since 2016, but she dropped 2 tenths off it today in 54.62. Tennessee’s Danika Katzer also set a personal best. Her former best was from 2014. She blew that away by over a second in 55.52 as she placed 3rd.

LSU freshman Summer Stanfield came in 2nd there in 54.91. That’s her fastest swim since 2018 and just 2 tenths shy of a best. Fellow Tiger freshman Emily Van De Wiele put up her 2nd fastest performance ever with a 23.62 in the 50 free. She set her lifetime best 23.39 back in November.

Arkansas’ Vanessa Herrmann was within a second of her best in the 200 breast. Herrmann clocked a 2:11.92 this morning. Her lifetime best is a 2:11.09 from midseason.

SEC time trials morning is the start of championship season for me – just watching guys start to let loose their tapers.

Your typo certain worked too.

LSU seems to be having a much improved season this year. Always good to see!

5
0
Reply
JP input is too short
Reply to  coach

That would be their B relay too… I would think the A will be Luht/Pfeiffer/Clough/Curry or maybe Klotz. Should be a good relay by LSU standards but might still come in last at this meet…

What do you type in to find this meet on Meet Mobile? I’ve tried SEC, Southeastern Conference, and tried to select by location and still can’t find it.

Hey Josh! If you search ‘Auburn’ it’ll come up. I usually search by location

I usually search by swimmers for meets I can’t find.