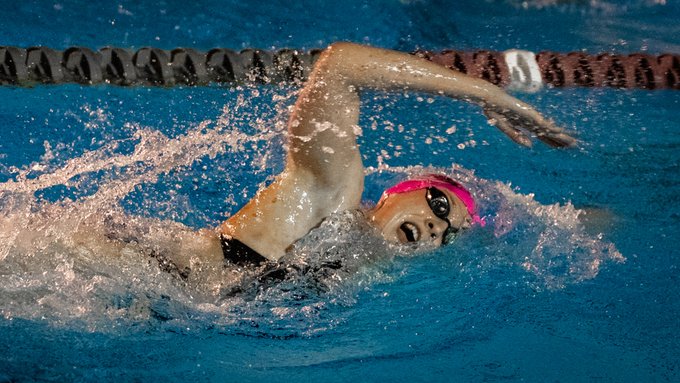 After back-to-back weekends at home, the Florida State swimming and diving teams will hit the road to face Georgia Tech on Saturday. Current photo via Florida State Athletics

TALLAHASSEE, Fla.   –  After back-to-back weekends at home, the Florida State swimming and diving teams will hit the road to face Georgia Tech at 11 a.m. on Saturday at the McAuley Aquatic Center.

This will be the third and final ACC dual meet of the season for the Noles.

“We’re looking forward to the trip,” FSU head coach Neal Studd said. “It’s a fast pool and a good ACC opponent. Their men’s team hasn’t competed yet, but we’re expecting them to be very good.

The meet will be streamed through the ACC Network Extra and live timing will also be available through meet mobile.

The men lead the all-time series 36-3, while the women are 14-1 against the Yellow Jackets.  This will be the second-straight meeting and 16th overall since the 2001-02 season.

Florida State defeated Minnesota last Friday night. The women’s team picked up its first win of the season in the second-straight upset over the then 18th-ranked Golden Gophers by a score of 186.5-111.5. The men won 197-103.

The Seminoles claimed three ACC Performers of the Week for the second-straight week.  Sophomore Aryanna Fernandes won four events including the 200 medley relay, 200 fly, 100 fly and 200 free relay, while claiming ACC Female Swimmer of the Week.

Junior Joshua Davidson won both diving events for the second-straight week and senior Molly Carlson picked up her first victory of the year on 3-meter. Both were named ACC Divers of the Week.

Georgia Tech’s women’s team finished second at the Rice Invitational (Oct.11-12) with a total of 853 behind the Owls.

This will be the first dual meet of the season for both squads.