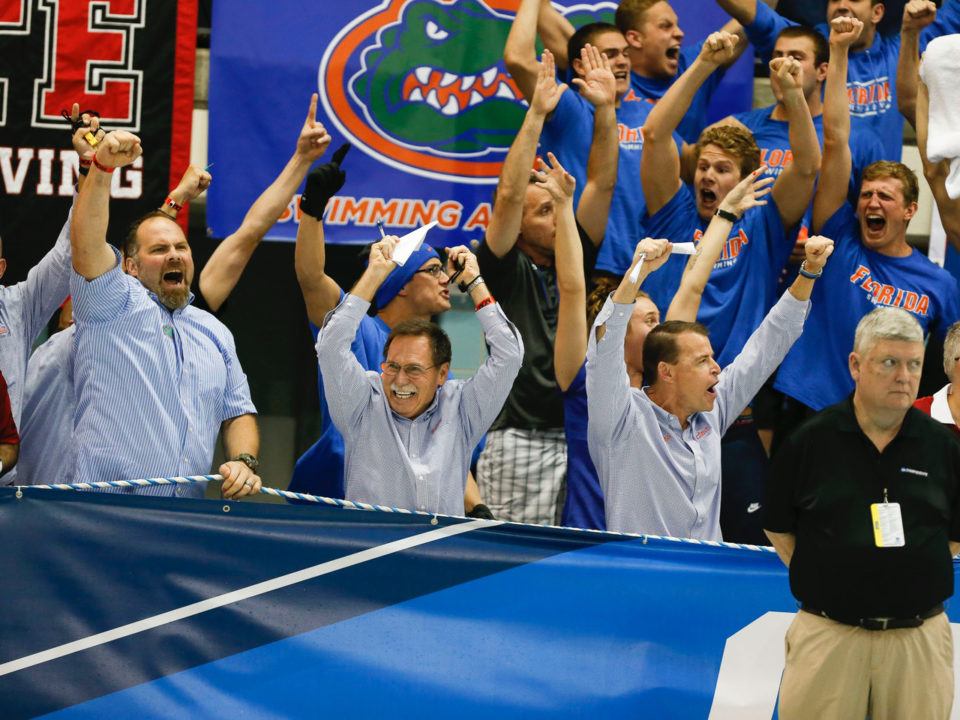 Nesty and Poppell were both associate head coaches under former men’s and women’s head coach Gregg Troy.Troy retired earlier this spring  after 20 years with the Gators. At the time, we reported the likelihood of a split program led by Nesty and Poppell, though the more than a month between Troy’s retirement and the new hires had started to suggest that Florida was instead looking at an outside hire. As it turns out, the Gators announced Nesty and Poppell as head coaches on Monday.

The split programs goes against the current of NCAA programs, which have seen far more teams combining previously single-gender programs than splitting previously combined programs. Florida had years of great success for men and women under Troy, but recently, the men had surged while the women fell off.

Florida’s full press release is below:

Both men have more than 20-plus years of coaching experience, are internationally acclaimed, having both coached and competed at the highest levels abroad and in the Southeastern Conference. Both have tutored multiple Olympians during their coaching careers and have guided athletes to both national championships and numerous All-America honors.

“We are fortunate to have two outstanding coaches, who are already heavily invested in the Florida swim programs, in a position to step up and provide leadership and continuity for our student-athletes going forward,” Athletic Director Scott Stricklin said. “The more we studied potential candidates to replace Coach Troy, it became obvious that the best choice was to provide Anthony and Jeff the opportunity to lead the Gators.

“Having won six-straight SEC championships, our men have had a run of high-level success, and I’m confident Anthony can continue putting them in position to compete with the best. Meanwhile, our women have developed some momentum in the last couple years, both in the pool and in recruiting, that Jeff has been an important part of creating. I’m looking forward to seeing him build off that momentum and get the Gators women back to a championship level.

“Restructuring the programs under Jeff’s and Anthony’s leadership will ensure our athletes receive the attention and coaching they deserve to enable them to enjoy an unbelievable experience during their time competing for the Gators.”

Nesty is entering his 21st season as a coach at Florida and it is his 25th season involved with the Gators after finishing one of the most decorated swimming careers at UF from 1989-92.

“It is with tremendous humility that I accept the position of Head Coach for the men’s swimming & diving team at the University of the Florida,” said Nesty. “This day is very special to me, as I am a Florida alumni.

“I would like to thank Scott Stricklin and the entire administrative staff for having the confidence in me to lead our men. The administration has been extremely supportive and I greatly appreciate all of their efforts on my behalf and that of the program’s.”

“I am fervently passionate about continuing the Florida tradition of excellence in our sport,” said Nesty. “It is my goal to maintain and surpass the standard Gregg Troy and others before him set for the premium program in the country.”

Not only has Nesty coached the highest caliber athletes to NCAA and SEC Championships, but also to Olympic medals. While at Florida, he has coached 42 Olympians who have won a total of 23 medals, including 11 gold. Nesty has served as the head coach of the Suriname Olympic team three times throughout his career (2008, 2012, 2016).

Nesty was a two-time Olympian who won the first gold medal for his country of Suriname in the 1988 Olympics. Nesty captured five NCAA titles for UF, the most in school history at the time. The only two Gators to have passed that mark of five national championships are Caeleb Dressel and Ryan Lochte. For all his successes as a Florida Gator, Nesty was inducted into the Athletic Hall of Fame in April 2002.

“I am extremely grateful for this prestigious opportunity and I look forward to leading this very talented team,” said Nesty. “It is great to be a Florida Gator!”

Poppell joined the Gator staff in 2016 after 23 years coaching at various elite places around the country. He now enters his 26th season coaching and third with the Gator program. While with UF, athletes have won nine individual national titles, 19 SEC titles and garnered 67 All-American honors. Poppell has also served as the recruiting coordinator for the women’s team, whose incoming class is ranked third in the nation by SwimSwam.

“I am deeply honored to have been named the next head women’s swimming coach at the University of Florida,” said Poppell. “I would like to thank Director of Athletics Scott Stricklin and Senior Associate Athletic Director Mike Spiegler for their trust in allowing me to lead this program.”

During his 15 years of head coaching experience, he has coached athletes at the club, high school and the Southeastern Conference level. Poppell has coached Olympians, SEC champions, as well as national and state championships.

“I truly appreciate Gregg Troy providing me with the opportunity two years ago to join his staff here at UF.

“With the addition of two nationally ranked recruiting classes and the continued development of our current group of student-athletes, I feel that the future of this women’s team is bright as we strive to compete for championships against the very best in the SEC and NCAA.”

The Jacksonville, Fla., native served as a head women’s coach at the University of Arkansas from 2006-12. While there, Poppell helped the Razorback women’s program reach new heights after guiding 16 athletes to qualify individually for NCAA Championships, with 10 of these women earning 10 NCAA All-America honors under his tutelage. Arkansas’ fifth-place finish at the 2009 SEC Championships was the highest finish in program history.

Prior to the University of Arkansas, Poppell spent 13 years with the Bolles School and Bolles Sharks, one of the country’s most prominent high school and club swimming programs. At the 2006 Spring U.S. Championships, he led the Bolles Sharks to a top-5 team finish. During his time at Bolles, he coached four swimmers in the top-25 in the world, an additional seven swimmers ranked among the top-100 in the world and 17 current/former Bolles Sharks that competed at the 2004 Olympic Games. He was also recognized as the National High School Coach of the Year after leading the women’s team to a high school national championship in the 2003-04 season.

Before coming to Florida, he served as head coach of Gulliver Preparatory School and Gulliver Swim Club from 2012-16. There, he guided the Swim Club to its first-ever Silver Medal award, a prestigious honor which recognizes the top 100 swimming clubs in the United States.

Poppell has not only coached in the SEC, but also was a decorated collegiate swimmer and former captain at Georgia. To this day, the Bulldog program remembers his contributions to the team with the annual presentation of the Jeff Poppell Award for Leadership.

–        During his tenure at Florida, he has coached 42 Florida Gators Olympians

o   Only gold medalist in the history of Suriname

–        During his two season as an Associate Head Coach at Florida, UF athletes have won nine individual national titles, 19 SEC titles and have garnered 67 All-American honors

–        Coached three Olympians while at Florida

–        At Gulliver, he coached four U.S. Olympic Trial qualifiers, three finalists at the U.S. Summer Junior National Championships, and 10 swimmers who were ranked among the top 25 nationally in their respective age groups

The Bolles connection runs strong in Gainesville. Congrats to the new hires.