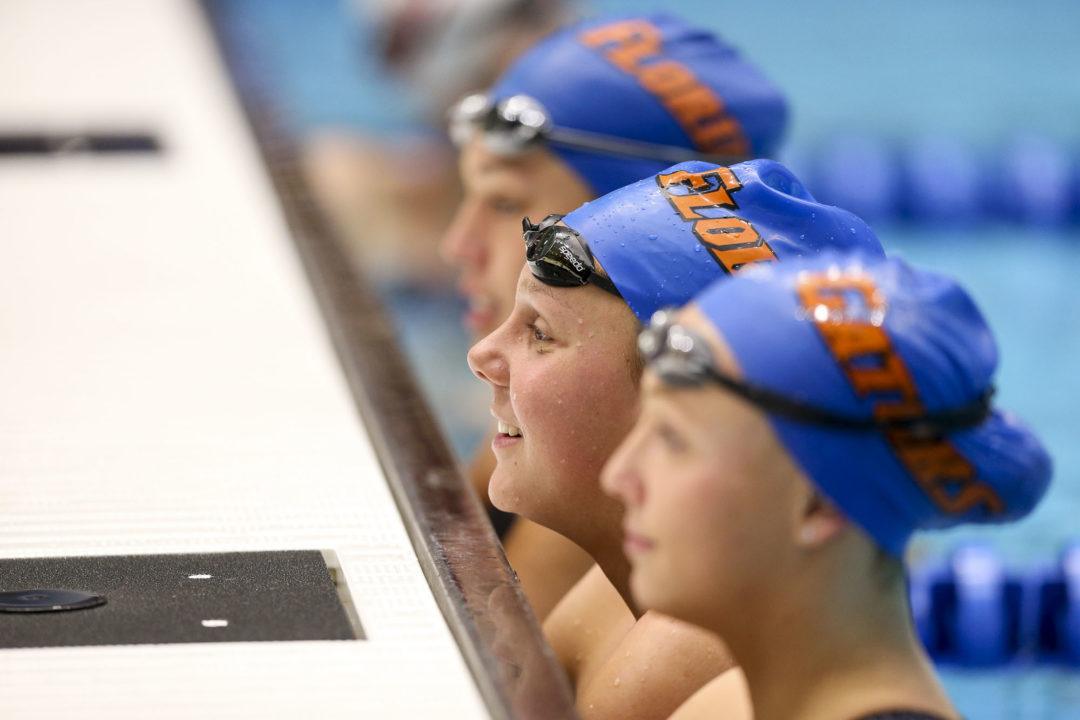 We pass along the whispers we've heard about the future of the Gator swim and dive programs - both frontrunners in the coaching hire and some big rumblings we've heard about a major structural change to the program. Archive photo via Tim Binning/TheSwimPictures.com

It’s already been a wild season for NCAA coaching changes, and that was even before yesterday’s bombshell: that Gregg Troy would be retiring from collegiate coaching after 20 years at the University of Florida.

In the day since the news broke, we’ve heard a number of rumblings about his potential successor(s). While there’s no official word on any of this, we’ll do as we did with Auburn’s high-profile opening and pass along the whispers we’ve heard about the future of the Gators – both frontrunners in the coaching hire and some big rumblings we’ve heard about a structural change to the program.

This is the biggest possibility we’ve heard in the wake of Troy’s retirement. Troy has had success with both the men’s and women’s teams, but over the past three years, it’s been clear the men’s program is on a higher trajectory than the women’s team. We’re told that Florida is strongly considering splitting its men’s and women’s teams with two different head coaches – a unique development in an NCAA where more and more programs have begun to combine their genders under one head coach.

That means that Florida might be looking for two coaches from this list, rather than just one.

The most likely option for a split program at this point looks to be promoting the team’s top two assistants to take over the head coaching roles. Nesty was a standout swimmer at Florida and is already enshrined in the Gator Athletic Hall of Fame. He’s been with the Gators for 20 years and is probably more likely to take over the men’s job. Poppell is relatively new to the program, but was previously with the Bolles School (where Florida hired Troy from in 1998) and was the head women’s coach at Arkansas for six years. He appears more likely to take over the women’s side of things in Gainesville.

Athletic directors do tend to keep an eye on the conference in these matters, and Jorgensen has been making a name for himself at Kentucky since 2011. He was also a standout swimmer at Tennessee. He’s previously head coached for Toledo’s women’s-only program and has had most of his success at Kentucky on the women’s side, particularly in backstroke, where Kentucky has become a factory of high-level performers.

Lopez’s name is going to keep coming up in connection with high-profile openings until he takes one – if he takes one. More and more, it’s starting to appear Lopez might prefer being in an assistant coaching role, though there’s no guarantee he remains at Auburn when that school announces its new head coach. Lopez also coached at Bolles (same as Troy pre-Florida) and has a good lay of the land in Florida recruiting-wise. He’s had more high-profile success on the men’s side with his coaching of future Olympic champs at Bolles.

Another SEC assistant, Moreno has been at Georgia for six seasons in a coaching capacity, and was also an associate head coach at Ohio State. She’s currently only an assistant at Georgia, and in the coaching succession plan, sits behind three associate head coaches who have been with Georgia for 11, 15 and 37 years. Moreno competed under her maiden name, Williams, at Georgia during the early 2000s and has stayed almost entirely in the SEC over her career – coaching with Missouri for three years before her four at Ohio State.

Taylor is another name that is going to keep coming up for head coaching vacancies until he takes one. The NC State associate head coach has previous Florida ties – he was the distance coach at Florida State for four years and has also coached the Dynamo Swim Club in Georgia. He’s been at NC State for six years, and Florida may be tempted to give him a shot after how well former NC State assistant Todd Desorbo has done in just one year at Virginia.

Funny how there are so many State haters but when it comes to finding a coach NC State is the first place they look.

FYI, I think the existence of “State haters” is related to annoying commenters on this site (who, for all we know, aren’t actually affiliated with NCST at all!). Looking at it objectively, I think there’s a LOT of respect for what Braden Holloway and the NCST program have done overall in the last 5 years. The results are undeniable. And it hasn’t just been a few lucky successes with 2-3 key athletes. Studs graduate, and then suddenly guys like Ress are going :40 on relays and Coleman Stewart is winning the 100 back title. And it’s not just sprinters, as they proved this years with titles in the 1650 and 200 fly. Especially after DeSorbo’s success at UVA, I think… Read more »

I just looked on College Swimming at the 2016 high school class. Unbelievably, Coleman Stewart is listed as the #115 recruit in that class.

Why is that unbelievable? Swimming is a numbers sport… the numbers dont lie. Did his times in HS justify any higher of a ranking? Imagine what would happen if we tried to rank recruits on “potential” or predictions of what they would do. SOOO many people would be up in arms about this guy and that guy being ranked too high or too low because of opinions and predictions.

If you mean unbelievable because he has obviously improved a great deal and reached the pinnacle of our sport at the NCAA level, then you have a better case as he has improved dramatically, although it is not SUPER rare to see, especially on the Men’s side.

Not sure what the love affair is with Gary. Nice guy, decent coach, does a good job as a group coach at NCST BUT that’s a BIG jump to HEAD Coach at UF of combined program. VAT maybe, but not here.

I agree Kathy! Gary’s first job should be at a program like Kentucky (Back fill for Lars)

I don’t see it….Assistant Coach at FSU team that was below average at best…and then assistant coach at NCSU…..No Head coaching experience at any level, and he is a candidate for 2 historic swimming power programs – Florida & Auburn….unbelievable.

Because All Americans and massive drops while at FSU was average for a distance program that wasn’t producing. Look at the conference results and NCAA results, his group always scores.

Shouldn’t Holloway be the name from NC ST that everyone is talking about. If I was trying to regain prominence or maintain it he would be the first name on my list……and make no mistake UF can pay a lot more the NC ST.

Holloway said on twitter he’s not leaving NC state. He could be lying, or be swayed by a bucket of cash, but that’s why we stopped including him.

Is it a fact that he is a finalist for these jobs or just hearsay?

In order to be a finalist, you have to put your name in the hat.

Vote Up1-1Vote Down Reply
Done It

I’d hardly call Florida a historic swimming power. They’ve had some great swimmers and are consistently top ten, but there are plenty of programs that can claim that.

Are you kidding? Multiple national team titles, and top ten team finishes at NCAAs nearly every year for the last 30 years? Caulkins, Nesty, Haislett, Heath, Torres, Zubero, Dwyer, Beisel, Lochte… these arent just names, they are icons of our sport. Back in the day, if you wanted to swim fast you wanted to go to Texas, Stanford, or Florida.

You can hate the Gators as much as you like, but you can’t deny the facts – there is incredible history at that program.

Vote Up23-1Vote Down Reply
DONE IT

I never said they weren’t a great team I said I wouldn’t consider them a historic swimming power. At least not in the same way I would consider Auburn. There are quite a few other teams that could claim national championships, top ten finishes and world caliber alumni and I wouldn’t put UF in the top 5. Not trying to hate just calling out that they aren’t Auburn, at least not in the last 20years.

Don’t think you’ll have to worry about Gary Taylor, I think he’s off the market?

Vote Up50Vote Down Reply
Where?

Please let it be Coaches Nesty and Poppell !

I’ve known and coached both when they were in high school, and both are men of great character. They are excellent all around individuals and know their craft. In addition, they have the experience and are “young enough” to stay at UF for many years to come and add to the needed stability. If you look out there the college swimming community is looking at more retirements on the horizon. I truly feel they deserve the chance and know the program.

You gotta think Nesty will have a shot. But they’ve got to at least reach out to see if any of the really big guns are interested. If it isn’t Nesty, I couldn’t imagine anyone who hasn’t already been a very successful head coach even getting a sniff. And what’s the word on Va Tech?

Hey Coach, I think Nesty is already one of the big guns….

He’s a great coach but has no prior head coaching experience. I think COACH may be referring to someone who has previously led a major program when he’s referring to “big guns.”

What group does Nesty coach?