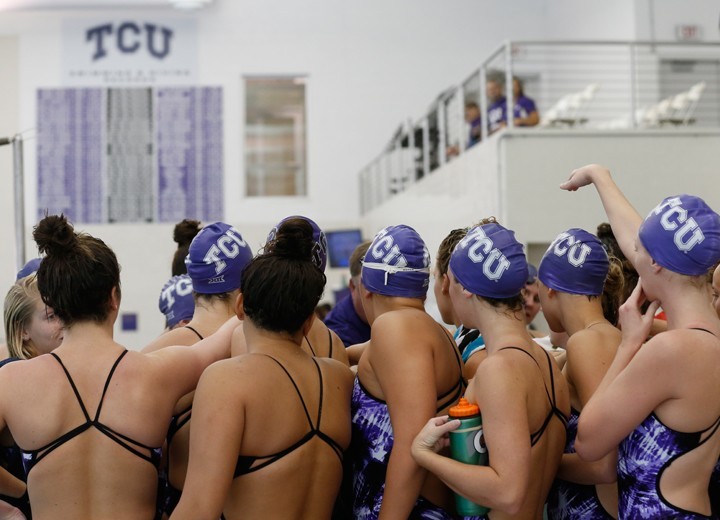 Winchester has only been at George Washington for three years, but has been a very fast riser in the coaching ranks. A swimming alum of Louisville, Winchester was an assistant with Division II Drury University and at the University of New Orleans before he took over head coaching duties at New Orleans in 2010. Winchester would eventually move to the University of Utah in an assistant coaching capacity in 2012, and was hired on as George Washington’s head coach in 2015.

In his three years there, Winchester’s men’s team won the program’s first two Atlantic 10 titles. Prior to Winchester’s tenure, George Washington had only had two individual men ever invited to NCAAs. Winchester had an NCAA qualifier in all three years, with Andrea Bolognesi in 2016 and 2017 and Gustav Hokfelt this past season.

TCU hired Sam Busch to be its head coach just 8 months ago, taking over for 38-year coaching veteran Richard Sybesma. But Busch was placed on administrative leave during this past season – his first as head coach – and resigned shortly after. Recent reports suggest that Busch was going to be fired, and sources have given SwimSwam conflicting reports that the team was either suspended for the remainder of the semester or that workouts have been made optional.

Best of luck to him, he can’t do much worse than his predecessor at least!

Who are Tanya and Tom referenced in his letter to his team? ADs?

What am I missing?

Tanya Vogel is the newly appointed AD, I am sure they are administrative heads who have provided him with the foundation to recruit exceptional athletes.

Poor Meghan Burton. She just transferred into George Washington. Such a shame.

Unfortunate yes, but all swimmers should choose school and program for their own merits , not just for head coach.

Why did she transfer from AZ State into GW?

Phenomenal coach and even better person! Do big things James

I had the pleasure of working with him in NOLA. Great things are in that program’s future. I am already telling my rising seniors to seriously look at TCU. Congrats James!

TCU headed in a new and promising direction, thankful the administration is committed to the student athletes of Men and Women Swimming.

Everyone should transfer now !