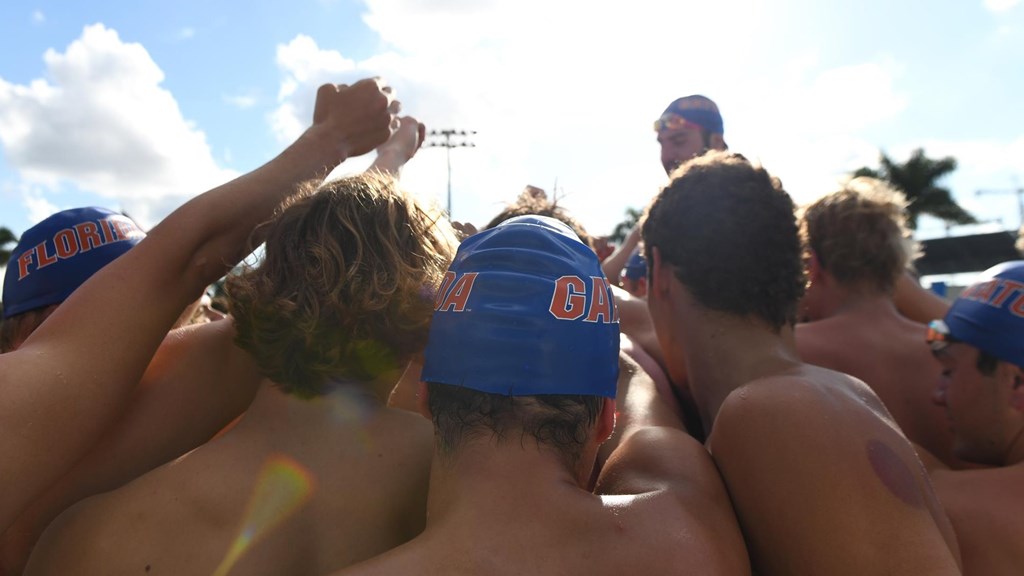 The Gator men's swimming and diving team travels to Columbia, Mo. for their SEC opener with Missouri at the Mizzou Aquatic Center on Friday. Current photo via Florida Athletics

GAINESVILLE, Fla. – The Gator men’s swimming and diving team travels to Columbia, Mo. for their SEC opener with Missouri at the Mizzou Aquatic Center on Friday, Oct. 18 at 10:30 a.m.

The Gators are off their first 4-0 start since the undefeated regular season campaign in 2013-14.

A trio of swimmers have started the year off with five individual event wins as Kieran Smith, Clark Beach and Eric Friese have picked up multiple wins each meet this season.

Florida swept the weekly SEC Awards for their efforts in the Gators’ 178.5-116.5 win against Minnesota on Oct. 11. as the league announced the second group of winners on Tuesday.

Alex Farrow earned his first career Men’s SEC Diver of the Week accolade after putting together his best performance of the season in Minneapolis. The senior posted the top 1-meter SEC dive of the season with a score of 328.07. On the 3-meter board, the senior was just .22 points away from third-place and tallied the fourth-highest 3-meter dive in the SEC this year.

Friese garnered SEC Men’s Freshman of the Week after continuing to produce success in the sprints, winning his fourth and fifth events, both in career-best times.

This SEC opener marks just the second time these two programs have competed in a dual against each other.

Looking at the Tigers

The No. 13 Tigers head into their matchup with the Gators without competing in a dual meet yet this season. The team hosted and won the Show-Me Showdown on Oct. 4 against nine other teams.

In the showdown win, Nick Alexander, Jack Dubois and Leonard Garcia Varela each walked away with two victories.

For his performance on the 1 and 3-meter, Garcia Varela was named the SEC Men’s Diver of the Week on Oct. 8.

Last season, the team posted a 2-3 record, including a conference mark of 0-1.

At the 2019 SEC Championships, Missouri would finish runner-up to the Gators with 1,137 points.

Head coach Anthony Nesty – “This will be a great test for us to see where we stand as team, facing a tough conference opponent in their home pool. We are ready for this challenge and to see what we can accomplish.”

Head Diving coach Bryan Gillooly – “This meet will be a little challenging for us because of the travel schedule. Thursday will be a full day of travel with no practice time at home or in Missouri and with the meet starting at 9:30 a.m., we won’t have much time beforehand to get adjusted to the facility. We will have to really come in mentally ready to go. It will be a good test for us early in the season.”

The Gators will compete in their home opener against conference foe Georgia on Nov. 1 at the Stephen O’Connell Center. The following Friday, the team will host Florida State in the Fresh From Florida Sunshine Showdown at 2 p.m. and will serve as the team’s final dual meet of 2019.

The Gators will be back in the pool on Nov. 22-24 when they travel to Atlanta, Ga. to swim in the Georgia Tech Invitational.

Florida’s divers will compete at the Auburn Diving Invitational on Dec. 17-19 to conclude 2019.

This meet is being live-streamed… THE MEET WILL BE STREAMED ON
SEC NETWORK+. YOU CAN WATCH IT ON YOUR ESPN APP OR ON YOUR COMPUTER HERE
WATCHESPN: LIVE SPORTS, GAME REPLAYS, VIDEO HIGHLIGHTS

Stop yelling at me!!

VERY INTERSTING to see how the Gators handle swimming against a suited team. It will be fascinating to see how Missou fares in post season as well after using much mojo during dual meets. Best wishes to both teams for a FAST meet!