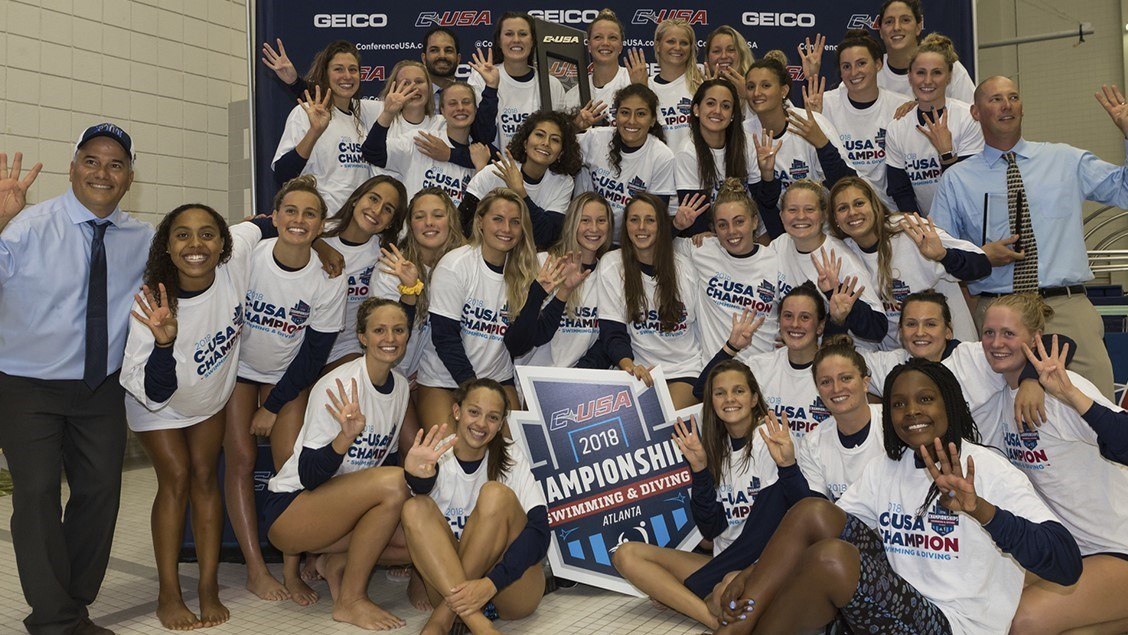 Florida Atlantic became the first team besides Florida International to win multiple events in a session on Saturday, the final day of the 2018 Conference USA Championships, but it wasn’t enough to dent the Panthers’ league as they rolled to a 4th-straight league title by a dominant 250 points. That’s their second-biggest margin of the 4-year title run, following a 173.5-point margin in 2017, a 318-point margin in 2016, and a 104-point margin in 2015.

In between came 2 more wins for FIU, followed by 2 more after her last win, giving them 14 wins in 21 events at the meet in total. FIU’s wins began with Skye Carey in the women’s 200 back, where she won in 1:56.31 for her 1st individual win of the meet after a runner-up finish in the 200 free.

Next up came a win from junior Naomi Ruele in the 100 free, where she touched in 48.67. For the NCAA-Championship-bound Ruele, that marks her 3rd individual win of the meet, which earned her a second Conference USA Swimmer of the Meet Award. Her results included a new school record in the 50 free (22.11), a second-straight win in the 100 back (52.54), and Saturday’s win in the 100 free.

FIU swept the meet’s major awards after a vote of the conference’s head coaches. That included Randy Horne being named the Conference USA Swimming Coach of the Year for a record-setting 4th-straight season.

That also included senior Becca Quesnel winning Diver of the Meet honors. After a runner-up finish on the 3-meter to open the meet, she won the 1-meter and platform events on back-to-back nights. Her coach, Rio Ramirez, won his 3rd C-USA Diving Coach of the Year award in 5 seasons after his divers finished 1-through-5 in every diving event.

The meet finished with another FIU relay win, when the team of Letizia Bertelli, Skye Carey, Megan Boxen, and Ruelecombined for a 3:16.96 – almost a four-second margin of victory to finish off the win.

Rice got the other win of the day from Marie-Claire Schillinger in the 200 breaststroke, touching in 2:10.42.

It’s a shame rice doesn’t have a diving to team to at least make it somewhat more competitive.

WOW! Randy Horner is an amazing Swimming Coach receiving Coach of the Year honors four years in a row. One of the best coaches in the NCAA who does not get enough credit for the job he does at FIU. Kudos also to Seth Huston of Rice University…another great Swimming Coach and has done tremendous things at Rice with their Swimming program. Conference USA is a very good Swimming and Diving Conference.