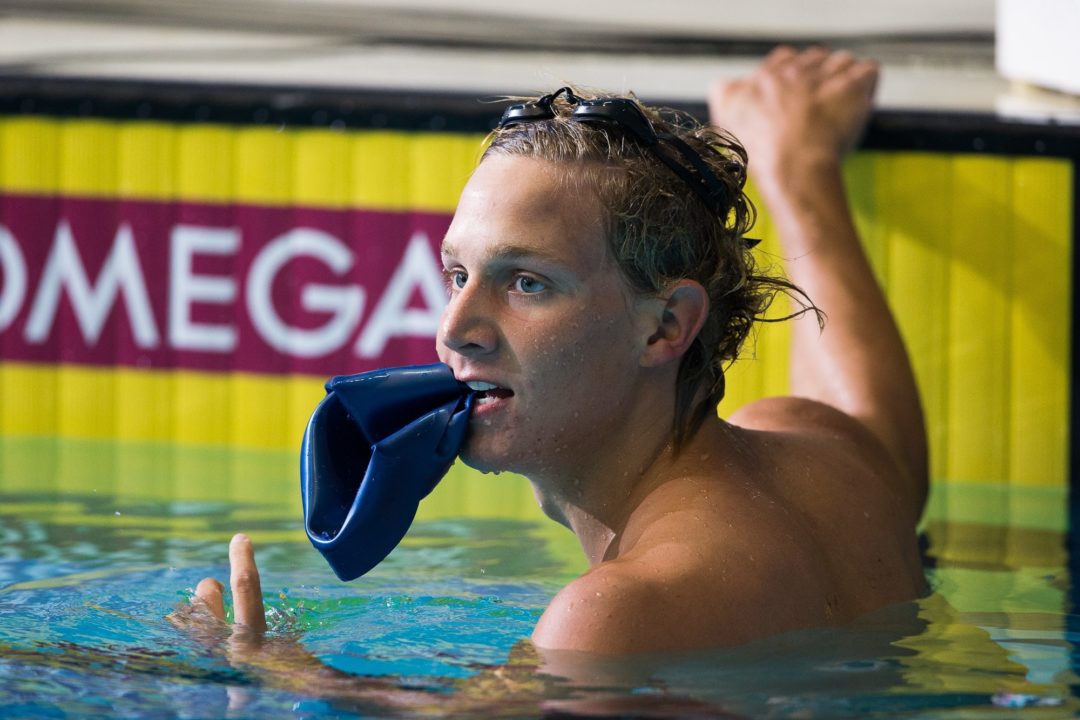 Caleb Dressel clocked an NCAA ‘A cut at the Georgia Tech Invitational in the 50 free, 19.31. Current photo via Tim Binning/TheSwimPictures.com

Florida’s men’s and women’s swimming & diving teams have reached the midway point of their seasons, as each squad readies itself for its 2015 schedule.

The Gators are back in action at the beginning of 2015, as the Gators travel to Tallahassee, Fla. to take on in-state rival and No. 22 Florida State on Jan. 2. Florida then heads to No. 10 Auburn on Jan. 24, before returning home a week later on Jan. 31 to finish off its regular season against No. 15 Tennessee in the Stephen C. O’Connell Center Natatorium.

Florida will then travel to Auburn for the SEC Championships which will take place from Feb. 17-21. Three weeks later, Gator divers will compete at the NCAA Zone B Diving Championships in Athens, Ga. from March 11-13.

The men’s and women’s NCAA Championships are being held in separate cities again this year with the women’s championships in Greensboro, N.C., (March 19-21) and the men’s in Iowa City, Iowa (March 26-28).

Florida notched numerous NCAA ‘B’ provisional marks during the fall season and most recently clocked five NCAA ‘A’ automatic times at the Georgia Tech Invitational, including:

The Gators have claimed five individual weekly honors on two separate occasions throughout the fall. On Oct. 14, the Gators garnered three SEC weekly awards with two coming from the women’s squad including juniors Jessica Thielmann (SEC Female Swimmer of the Week) and Kahlia Warner (SEC Female Diver of the Week). Meanwhile, freshman Caeleb Dressel earned the SEC Male Freshman of the Week award.

The trio earned the accolades for their performances in the team’s first few weeks of action, as these were the SEC’s first weekly awards given for the 2014-15 season. Check out the complete release here.

On Nov. 25, senior Dan Wallace and Dressel were named the SEC’s Male Swimmer of the Week and Freshman of the Week, respectively, for their efforts in the Gators domination of the field at the Georgia Tech Invite. Read the complete release here.

The men’s team has experienced great success at home since 2010, as the Gators are unbeaten in their last 19 dual meets in the O’Dome, including 2-0 this season. Meanwhile, Florida’s women’s squad has posted a solid 14-4 mark over the past four seasons in Gainesville. UF hosts one more dual meet this season, as the Gators will host SEC-rival Tennessee on Jan. 31 at noon.

In addition, The UF men’s team signed seven student-athletes to NLI’s to swim or dive for the Gators.

“We are extremely excited about the quality and depth of the class,” Troy said. “We covered a lot of our needs with these student-athletes. This is an outstanding class of women that are not only extremely talented in the pool, but are great students as well.”

College Swimming News is courtesy of the University of Florida.