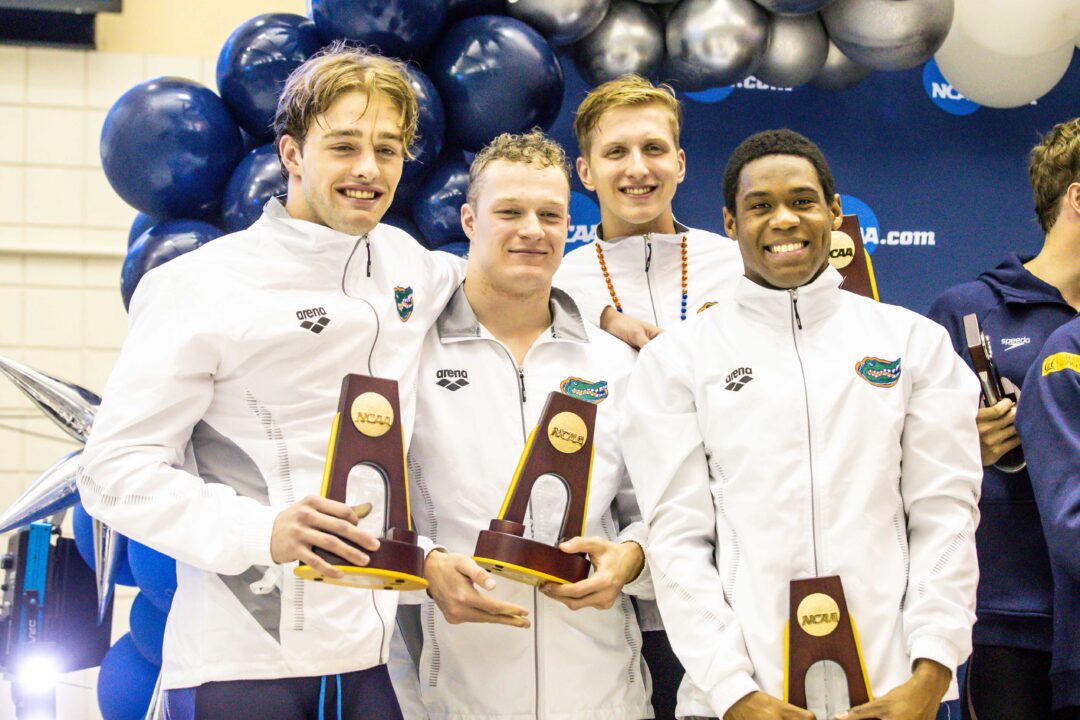 The Florida Gators were the 200 free relay NCAA Champions last season. Even after graduating two legs, they could be even faster this year. Archive photo via Jack Spitser/Spitser Photography

The University of Florida has become ‘the university of freestylers’ over the last 15 years of men’s collegiate swimming. Since 2009, the school has won an NCAA men’s title in each individual freestyle event at least once.

Only the University of Texas can claim the same.

That has totaled 14 individual titles in the same time period, with a pile of relay victories to go with it.

Florida Gators swimmers have the NCAA and US Open Records in the 50 yard, 100 yard, 500 yard, and 1650 yard freestyles, and Gator men won every freestyle event at the 2021 US Olympic Swimming Trials.

While the latest focus has been on the team’s success in the distance races with Bobby Finke and Kieran Smith, along with Katie Ledecky in the pro group, the program has swung back-and-forth between success in all three types of freestyle: sprint, middle-distance, and distance. Perhaps our readers will recall the name Caeleb Dressel, who won 7 out of a possible 8 NCAA titles in the 50 and 100 yard freestyles in his collegiate career.

While the Gators didn’t really have a superstar sprinter last year, they still came away with the NCAA title in the 200 free relay. They came as close as anybody has to breaking Auburn’s legendary NCAA Record in the event from 2009.

In spite of the graduations of the last two legs of that relay – the unsung hero Davis retired and Smith went pro – next year’s Florida relay could be even better with the announcement this week that Canadian Josh Liendo, who turns 20 on Saturday, will join the team next season.

Liendo already has a global reputation and the hardware to go with it: he won bronze medals individually in the 100 free and 100 fly at this summer’s World Championship meet, as well as a mixed free relay silver medal.

Liendo is already one of the fastest sprinters in the world, of any age, and if it weren’t for David Popovici, he’d be the anointed future sprint king of the world (and he’s better than the Romanian teenager in the 50).

And he’s not the only showpiece sprinter that the Gators are bringing in next season: they’ve also signed the #7 recruit in the class of 2022, Florida High School State Champion Dawson Joyce, who has best times of 19.77 and 43.59 in the 100 yard free.

With the continued maturing of Adam Chaney, who appears to be a superstar-on-the-brink, and the new additions, the Gators sprint group could take a serious run at some records next year.

Let’s see how next year’s Gator team might stack out compared to last year’s in the sprint free relays. Here’s some back-of-the-napkin math:

Even with the ‘knowns,’ without projecting any kind of a big drop from Dawson Joyce as a freshman (though we’ve seen a lot of freshman have big drops lately), the math above makes for an NCAA Record.

Liendo is already faster in long course than the defending NCAA Champion in the 50 and 100 yard freestyles, Brooks Curry of LSU. While Liendo appears to have plenty of chops in short course as well, for the same of argument, we’ve set his ‘estimated’ times as Curry’s NCAA winners from last season.

If Liendo is better than the conservative projection and starts creeping down toward Mr. 17.63 territory, this record is going to be annihilated. And McDuff was only a freshman last season, so even with Friese entering his junior year, this relay is going to be hard to beat for a long time.

And all of the above doesn’t even include Alfonso Mestre, who has been 21.9 in the 50 free in long course, but has only been able to work that into a 19.4 in yards (at the 2022 SEC Championships).

In the 400 free relay last year, the Gators were ‘just’ 6th: lower than they finished in any other 200 or 400 yard relay. It was the end of a long meet, and the team didn’t quite fire on all cylinders – they were faster at SECs. A lot of the members of that relay (especially Chaney, Friese, and Smith) had big schedules at NCAAs, and at the end of an emotional meet, they were maybe a little gassed.

But again, this relay arguably gets better next year after only losing the anchor Smith to graduation.

2:45.78 would have won last year’s NCA Championship meet, although expecting the ‘best case’ scenario at the end of a four day meet can be tough. Texas won the title in 2:46.03, which was surprisingly-far from the NCAA title of 2:44.31.

With three legs of that Texas relay presumed to be gone next season, this one is wide open next year – the 3rd place Cal Golden Bears might be the favorites with Bjorn Seeliger, Destin Lasco, and Jack Alexy returning. That title could also go to 4th-place Virginia, who swam 2:46.80 last year with two freshmen and two sophomores.

But Florida, with Liendo, also has a huge chance here to come out on top.

I think the Gators would probably really like to get Friese off this relay if they can to reduce the strain on his schedule – he swims the butterfly leg of the Gator medleys as well, and by the end of the meet last year, he seemed the most tired of the Gator crew.

If Joyce can progress here and provide some late-meet reinforcements (he is unlikely to be on any medleys or the 800 free relay), that’s probably more important for the Gator cause than in the 200 free relay.

With these additions, plus that of US Olympian Jake Mitchell and the rest of a top-5 incoming freshman class, This Florida team is starting to stack up the kind of talent that could allow them to jump that gap to break up the Cal/Texas dominance that has dominated the top of college swimming. It can be easy to look at college rosters and be fooled by the top-end into thinking that a team is ready to challenge for a title, and yet every year dating back to 2014, Texas and Cal have been #1 and #2, in some order.

That size of that gulf from the top two to everyone else is a little hard to process until you really start digging through the numbers, but this Florida team is starting to have that feel. They have multiple swimmers overlapping in a few races, they’re getting big-time transfers and big-time freshmen in simultaneously, and they don’t have any huge holes.

If Finke and Smith had decided to return for their optional 5th years, these Gators could take a serious run, but we don’t know how those scholarship hits would have impacted the rest of their roster either. As is, they’re probably a couple of individual scorers (swimmers or divers) short of that, but the Gators are knocking on the door and have a ton of momentum. Don’t count them out as real title contenders over the next quad.

Sink Or Swim: More individual swimming events at Men’s 2023 NCAAs will be won by Americans than by non Americans.

Foreigners take it. Just did a little mental headcount of the NCAA’s biggest swimmers right now and a surprising amount of them are foreign.

They hold the mortal record in the 200 yard free also.

Dean may be beyond human comprehension, but he’s still a mortal

You don’t just go around disrespecting Daddy Farris like that

Where did Karol Ostrowski decide to go? The only teams he follows on Insta are UF, FSU, and Drury. It would be such a waste of his talent to end up at FSU.

If he comes to Florida, the 200 free record will get annihilated, the 400 free relay record would be on watch, and UF could finally break out of 3rd.

I wouldn’t be surprised if UF is where he goes now. They’re on fire rn.

I would like to have seen Keiran come back and not have all the relay duties. 3 individual events and the 4 x 200.

Macguire McDuff is quite the name