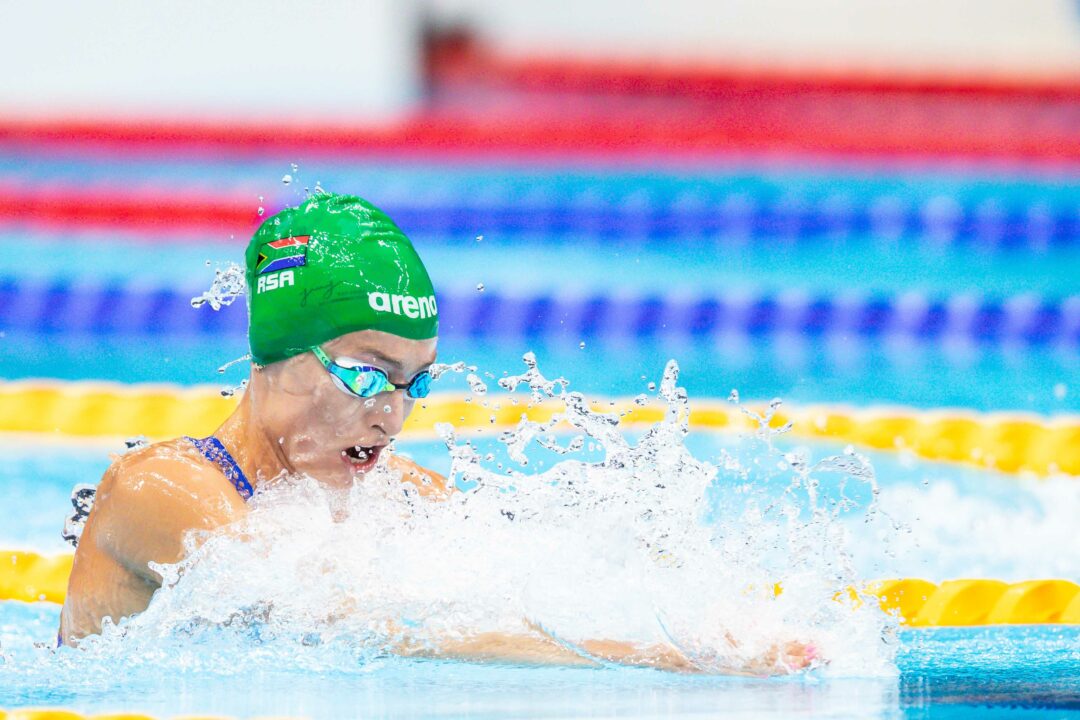 FINA has released the official time standards for the 2023 World Championships that will take place in Fukuoka, Japan. The Championships will run from July 14 – July 30, 2023, with the swimming portion occurring from the 18th to the 25th.

The time standards, which are listed below, are fairly consistent with the cuts for the 2022 World Championships in Budapest this year.

Both the A and B time standards have gotten faster in 2 women’s events and 5 men’s events, while just the B cuts got faster in the women’s 200 butterfly, 400 IM, and 1500 free. The 1500 free change is the most dramatic change in the standards. FINA has confirmed that this change is not an error and that the listed standard is correct. There were 27 entrants and 26 starters in the women’s 1500 free at the 2022 World Aquatics Championships. Only six of the swimmers who actually raced were slower than the new “B” standard in Budapest, and only three had entry times slower than the new “B” standard, as the event adjusts to its new-found status as an Olympic event. FINA says that the standard used in Budapest 2022 was the original Fukuoka 2021 standard that was set in 2019. In 2023, the B qualifying standard is set at +3.5% of the women’s 1500m Freestyle A time.

Check out all of the changes from 2022 World Championships to 2023 below.

In the five men’s events where the A cut got faster, the B cut has also been lowered slightly, while the women’s B cuts were lowered in the 200 butterfly, 400 IM, and 1500 freestyle despite there being no change in those events’ A cuts.

I just read the FINA document for the 2024 Olympics and it appears as there are only 2 ways to qualify a relay for this Olympic games, a country either has to finish Top 3 at the 2023 World Champs or Top 13 at the 2024 World Champs (excluding Top 3 from 2024 WC). So I guess FINA have come up with a way to force countries to send their best athletes to the 2024 World Champs. If this has been covered by SwimSwam I have missed that article.

Yep- we have discussed that at length….and with the US and AUS getting a Top 3 position in every relay (with perhaps a couple of exceptions) the rest of the world is battling for just 1 automatic qualifying position in Fukuoka!
Dumb and unfair.

AUS women’s relays, barring acts of self destruction, should all qualify in Fukuoka. MMR = probable but not assured. Men look much less certain. Both 4X100 & 4X200 are good chances to book their tickets early but qualification will be cut-throat with no one assured in 4×200 and USA the only safe bet for 4×100. Another Chalmers rescue mission will most likely be required. M4XMED is Doha bound.

CAN women will most probably have 4X100 qualified and 4X200 & 4XMED are very good chances of making the cut. If their “guns” are firing then all 3 should get the early ticket.

Given the stated dissent… Read more »

AUS should just send our best available team to Fukuoka and qualify whatever teams we can. Perhaps encouraging some coaches/swimmers to concentrate on relays and best individual event only to ease their schedules/prep toward Paris..

If we have non-qualified relays to Doha – perhaps there might even be some relay-only swims for any stars who put their hands up to help out. We can ignore relays where we have already qualified, if we want.

Rest of team can be filled from whoever wants to go (mainly up-and-comers?) with most of the big boys & girls able to skip it totally if they want to focus on Olympic success.

The relay teams sent to Doha don’t even need to be that good to get top 13. Imagine if we sent over teams just good enough to get top 13 in each relay prelim and then scratch each final as a middle finger to FINA? That’d be hilarious.

If you try and get too “cute”; it can come back and bite you in the gluteus maximus as was the case with AUS M4X100 in Kazan that didn’t even make the top 12 in qualifying. Brit men and women got bitten in Tokyo missing M4X100 & W4XMED finals doing the very same thing.

Am on the same sheet as Oceanian with regards to the prime focus of Fukuoka being ensuring as many relays as possible “auto qualify”. Much as it would be great to see the MFR WR take another haircut; it may have to be put aside.

Unfortunately, I don’t think the M4XMED can avoid a trip to Doha. Would give some credence to not necessarily sending… Read more »

Was the 100 breast always this fast?

59.7 seems quite quick ngl for a standard

He made the 400 A cut at Euros, speaks to where his strengths are right now.