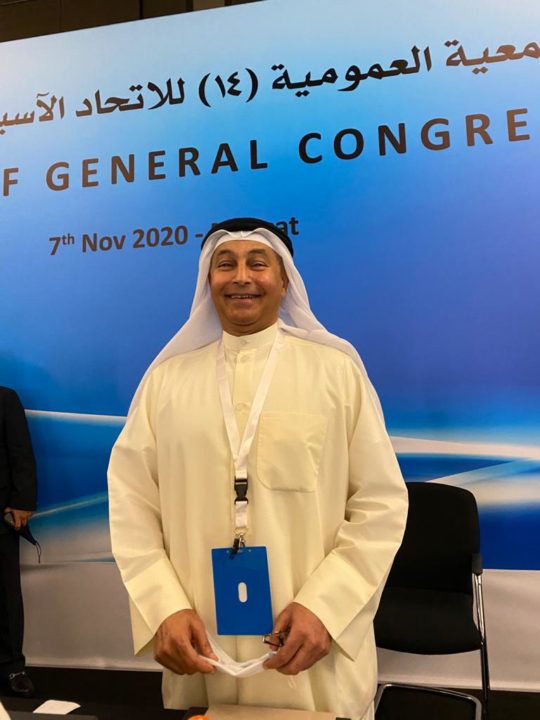 FINA General Congress elected Husain al Musallam of Kuwait as its new President on Saturday. Brent Nowicki of USA will serve as the Executive Director. Archive photo via FINA

On Saturday morning,  the FINA Congress General gathered in Doha to elect a new president and cabinet for the 2021-0225 period. Husain al Musallam of Kuwait received an overwhelming number of votes which led to him being elected President in an uncontested race.

Prior the election, Al Musallam served as the bureau’s First Vice President beginning in 2015. The Republic of South Africa’s Sam Ramsamy was voted to replace him. Al Musallam’s presidency was effective immediately and he decided to move forward with more voting and appointments.

Among those appointments was American lawyer Brent Nowicki, who was elected as the Executive Director at FINA. He will be replacing Marcela Saxlund Medvedev who served as interim after longtime ED Cornel Marculescu resigned in March.

Other bureau members that were voted for include a new FINA Ethics Panel and an Audit Committee for the 2021-2025 period.

Al Musullam formerly represented Kuwait as a youth international swimmer. Before being elected into the FINA Bureau in 1996, he was an airplane pilot. His first Kuwaiti national team selection was at the age of 13 which allowed him to compete in meets such as the Pan-Arab Championships, the Asian Championships, and the World Championships.

Al Musallam’s received nearly-unanimous votes during the election process on Saturday in Doha. Of the 309 possible votes, he received 302 in his favor and only 7 against him. He ran unopposed, which made it less complicated for him to receive the necessary votes to be elected. FINA has not published the names of the delegates who opposed Al Musallam’s election.

His election does not come without controversy. Al Musallam has been involved in a FIFA soccer scandal that was investigated by the FBI, a financial sponsorship agreement with the Olympic Council of Asia. The IOC previously banned the Kuwait Olympic Committee for government interference, and Al Musallam’s own Swimming Association attempted to have him removed from office directly preceding the 2017 FINA elections when he was named First Vice President.

Kuwait is not known for its water sports. They sent one athlete to the Rio 2016 Olympic Games among the four Olympic aquatics disciplines of swimming, diving, synchronized swimming, and water polo.

At the end of the meeting on Saturday, Al Musallam expressed his intention to govern with the following principles in mind: teamwork, equity and inclusivity, and more cautious financial support and spending. During his speech, he outlined his plans for financial success and emphasized the priority of the athletes. He also took the time to emphasize his commitment to remain financially transparent while serving as FINA’s President.

In his acceptance speech, Al Musallam also praised his predecessor Dr. Julio Maglione, who served as the FINA President for 12 years. IOC President Thomas Bach echoed the sentiment, highlighting the impact Maglione had on the sport and the bureau. In 2013, FINA changed the rules to have his presidency extended. Instead of serving 4 years, he was FINA’s President for 12 years.

Al Musallam decided to hold a brief meeting after his election, whose first order of business was the election of a new FINA Executive Director.

Another position that was filled on Saturday was that of Executive Director. Former ED Cornel Marculescu of Romania resigned in March of 2021 after holding the position for 35 years. He represented his country for water polo at the Tokyo 1964 Olympic Games. Deputy ED Marcela Saxlund Medvedev stepped in as interim in the meantime.

Brent Nowicki of the United States was chosen as FINA’s new top executive. He was previously the Managing Counsel at the Court of Arbitration for Sport (CAS). Nowicki played Division I lacrosse at the Fairfield University before receiving his Juris Doctor degree from the State University of New York at Buffalo.

He spent several years as a lawyer for various sports organizations and committees. He is an advocate for anti-doping at the Olympic level and has dealt with several cases involving the IOC, FIFA, leagues, teams, and individual players. He serves on the International Committee of the Sports Lawyer Association.

Congress approved the nomination of Maglione as FINA Honorary Life President. He joins Mustapha Larfaoui who received the distinction in 2009.

The bureau approved a raise in the 2021 prize money for athletes to $2.4 million.

It was not specified how the money would be distributed but the total is comparable to the International Swimming League’s season 1 prize pool of $2,580,400. The season 2 prize was 2.5x what it was in its first season. The increase meant that $6,050,000 were up for grabs. After the Olympics in August, the only major FINA Swimming competitions remaining for 2021 will be the FINA World Cup and the Short Course World Championships.

The bureau concluded the meeting with the approvals of several laws and committees. First, they approved the creation of a Reform Committee and its various subcommittees. They also accepted the Memorandum and Understanding for FINA athletes to train and receive education with four university programs. Finally, they confirmed the By-Laws that will be used to establish the plan for the Athletes Committee election in May 2022.

It is open to argument as to whether FINA, FIFA or some other sporting organisation is the most corrupt. However, when it comes to incompetence FINA wins hands down. What exactly are the qualifications of Al Musallam? His only claim to fame is being investigated for corruption. The new Executive Director has to be an improvement on Cornel Marculescu but I would have liked to have seen the appointment of someone with real commercial and marketing experience to drive the sport forward. Overall, the FINA Bureau is largely made up of officials from countries which do not really have competitive swimming. I don’t believe these officials bring anything to the table. it is just one big gravy train.

is the most corrupt

Oh, FIFO without doubt, because much more money is involved. Corruption level is directly proportional to the amount of money involved. It all starts from Olympic commitees in each country and all are corrupted and bribbed constantly, without any checks and balances. Then, they vote for corrupt reps on the FINA level. What can possible go wrong?

>The IOC previously banned the Kuwait Olympic Committee for government interference, and Al Musallam’s own Swimming Association attempted to have him removed from office directly preceding the 2017 FINA elections when he was named First Vice President.

Yup, he is qualified to lead an F word sport organization.

Can’t believe Neuburger is still hanging around. We keep putting this guy up with the hope that one day he might actually do something (like represent us).

When there were rumblings that Janet Evans might get this spot, I was quite excited. Some new blood, some new ideas, some new ethics…

But alas, just more of the same.

When I look at the new executive, I can’t help but think to myself “More of the same.” More old ideas, more old visions, more corruptions.

Maybe this Executive Director is a sign of hope? Though he too has zero.zero aquatics background, so maybe he just doesn’t care about the sport like the rest of them.