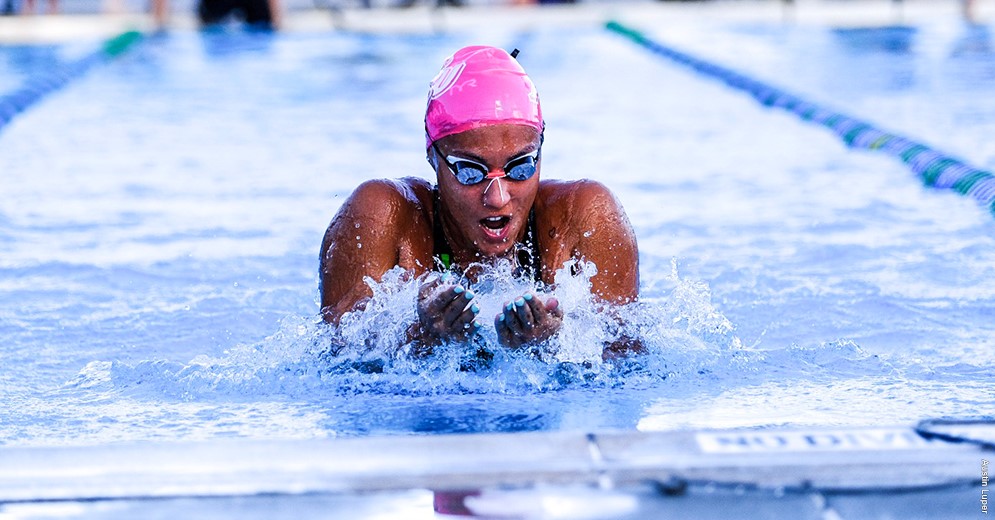 The FGCU swimming and diving team continued its hot start to the 2019-20 season, earning a decisive 172-121 victory over Vanderbilt on Friday night. Current photo via FGCU Athletics

“It was a great day,” head coach Dave Rollins said. “Before we got started, I told the team that I wanted us to win every aspect of the meet, including team support, warming down, their turns, their breakouts and their finishes. They did a really good job of that. There are some areas that we can improve, but to see how fast some of those girls were swimming this early in the season is really exciting.”

Over the course of the meet’s 16 events, the Eagles picked up 10 first-place finishes. Junior Petra Halmai led the way, taking home three individual events and contributing to a Green and Blue relay win.

Freshman Kaja Reinhardt was the next big winner for the Eagles, touching the wall first in the 200 Free. Classmate Anna Hogan (Louisville, Ky./DuPont Manual HS) also contributed points in the race as FGCU jumped out to a 29-25 lead.

Halmai earned her first individual victory of the meet in the 100-yard breaststroke. Her time of 1:01.18 currently stands as the 11th-fastest time in the country. She also laid down a nationally-ranked time in the 200 Breast; her mark of 2:11.36 checks in at fourth in the collegiate standings, behind only Power-5 opponents. That time is .15 seconds off of her personal best, which stands as the school record.

FGCU picked up crucial points in the middle of the meet as the team posted a four-event stretch of top finishes. The streak began in the 200 Fly, which featured an Eagle sweep via the efforts of Halmai, freshman Julia Rodriguez (Gainesville, Fla./Buchholz HS) and Fry (Oakwood, Ohio/Oakwood HS). Czarnecka (Lublin, Poland/Liceum nr 10 w Lublinie) and freshman Hailey Jerew continued the scoring with a one-two finish in the 50-yard freestyle, which was followed up by rookie Reese Wakefield‘s win in the 3M dive. Czarnecka capped off the run with another individual triumph in the 100 Free. She was followed by Reinhardt (Herdecke, Germany/Helene-Lange-Gymnasium Dortmund) and Jerew (Miami, Fla./Cutler Bay Senior HS).

Wakefield (Guelph, Ontario, Canada/Bishop Macdonelle CHS) continued to pick up wins in her rookie campaign as she won the 1M board to sweep both diving events. She outscored her opponents by a combined 33.67 points and has so far won every diving event that she has competed in as an Eagle.

In the final event of the day, it was the Eagles who touched the wall first in the 400-yard freestyle relay by a thrilling, 0.04-second margin. Reinhardt, Czarnecka, Sulenta (Zagreb, Croatia/Gimnazija I ekonomska skola Benedikta Kotruljevica) and Jerew provided the Green and Blue’s last points of the meet as the quartet edged the second-place Commodores with a time of 3:27.07.

In addition to the excitement of the victory, multiple FGCU swimmers notched new lifetime bests. Jerew took about a second and a half off of her previous mark in the 100 Free in just her third collegiate meet. Senior Elizabeth White (Fort Myers, Fla./Riverdale HS) swam a 2:18.85 in the 200 Breast, almost half a second faster than her previous best.

With the win, the Eagles continue the start of the season with their best mark since 2015-16. That year, FGCU began its campaign with a 7-0 mark in dual meets.

Up Next
FGCU will remain at the Nest to host Houston (3-0, 2-0 American) in a two-day meet beginning at 4 p.m. on Friday, Nov. 1. The teams will resume the action at 11:30 a.m. on Saturday, Nov. 2. On Friday, fans are invited to participate in a Halloween costume contest. The Cougars were represented at last year’s NCAA Championship by multiple student-athletes across different events.

“We had some really great swims with some close races. All in all today was a really exciting day of racing. Tonner continues to have a great season and I am looking forward to what is ahead,” said head coach Jeremy Organ.

Vanderbilt returns to action Nov. 9 for an SEC dual meet at Tennessee.