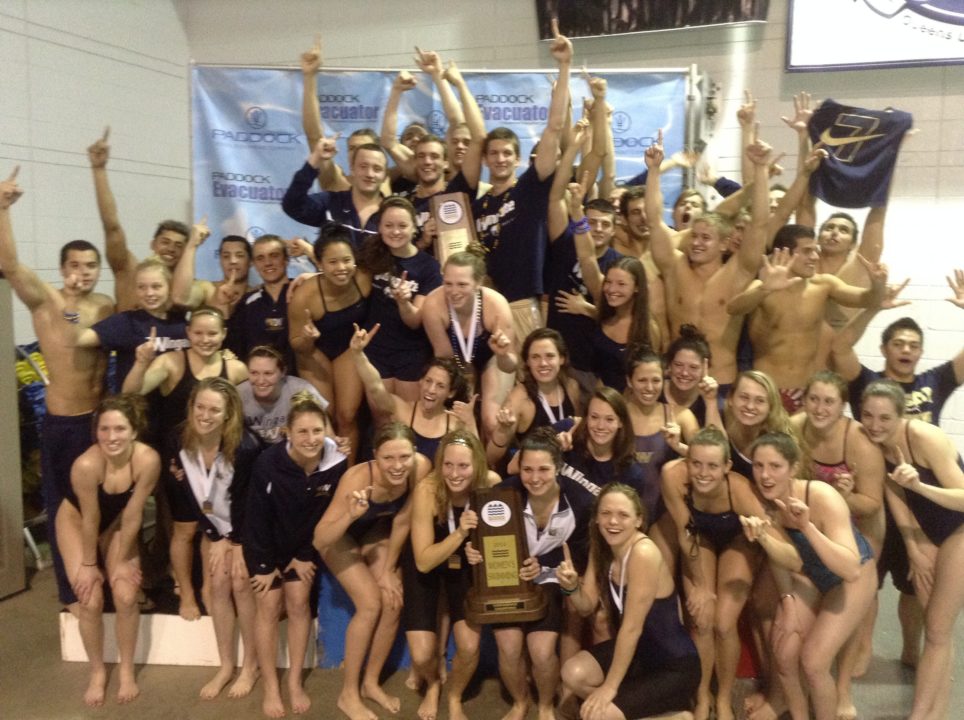 Special thanks to Michael Sanders of Limestone for assisting with on-site coverage of the Bluegrass Mountain Conference championship.

The winter storms that delayed the start of the Bluegrass Mountain Conference championship meet, and condensed it from a four-day to three-day contest, couldn’t put a damper on the 28 teams that came ready to swim fast.

Indeed, the 2014 BMC meet was the fastest ever: on the women’s side, 12 individual events and all 5 relays now have new conference records; for the men, it was 4 and 3, respectively. (Read our coverage of the record-breaking performances on Day One and Day Two of the championship.) 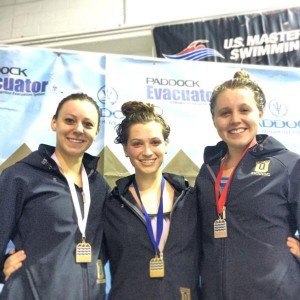 The all-Queens podium in the 1650 at Bluegrass Mountain Conference championship. Courtesy of Queens Athletics.

The final session began with Queens going 1-2-3 in the women’s mile: Meredith Boudreaux broke her own conference record (16:51.62 from 2013) and the Queens school record with her winning 16:44.14. Royals teammates Nikki Johnston and Lauren Frizzell took second and third, respectively. Boudreaux was out in a 10:07.72 at the 1000, which was only .02 slower than her winning time in the event on Friday afternoon. Boudreaux started pulling away after staying tight with Wessler for the first 100 with sub-31 50s while the rest of the field maintained 31+. Johnston moved into second by decscending her 50s to overtake Wessler at the 550 mark. Frizzell also began creeping up and eventually passed Wessler at the 650.

Alex Menke of Queens won the men’s 1650 in 15:27.10. Andrew Greenhalgh of Johns Hopkins and Makis Jorgensen rounded off the podium. Menke, the defending NCAA champion in this event, wasted no time jumping out to a full-second lead after the first 50. Early on it looked like the battle would be for second place. Greenhalgh set himself ahead of the pack, while Jorgensen began to pull away from Hughes at the 600 mark.

Once again, Caroline Arakelian of Queens lowered a meet record she had previously set in the prelims session, this time the 200 back. Arakelian dropped another half-second from the 1:56.98 she’d gone this morning and finished with a new record time of 1:56.40. That falls .04 under the current NCAA DII record of 1:56.44, set in December by Anastasia Klyaroskaya of Delta State. Finishing second was Taylor Kitayama of Hopkins; Vika Arkhipova of Wingate was third. Kitayama took it out like a bullet but it would take more than an early lead to win this race as Arakelian brought the thunder in the second 100.

Matt Josa of Queens broke the conference and Queens school records in the 200 back with a 1:43.44. The previous mark of 1:46.05 was set last year by Wingate’s Tim Kniffler. Four seconds behind Josa a heated battle was being fought for second place. Queens’ Zach Phelps swam a huge second half and got the silver, just getting past SCAD’s Ryan Searles. Searles fought stroke for stroke with Wingate’s Kniffler the entire last 50 and ended up with the bronze by .30. Josa was the obvious favorite as he had already set the NCAA d2 record in the event earlier this year. The surprise was the outside comeback in the last 25 by teammate Zach Phelps to secure the 1-2 finish for the Royals.

In the 100 free, Anastasia Bogdanovski of Johns Hopkins broke the meet record (50.15) she had set in prelims with a 50.03 finals swim. Emily Reh of Limestone finished second, while Lillian Gordy of Queens took third. Limestone’s Reh got off to a great start and led after the first 25, when Bogdanovski began to make her move and used a sub-26 second 50 to seal the victory.

Limestone’s Sean Gunn emerged victorious among a crowded field in the men’s 100 free. Gunn took it out fast in a 21.1 and was able to hold on to finish first in 44.52. Dylon Johnson of Wingate put up a huge back half to finish .01 ahead of Queens’ Harry Traystman for second, 44.88 to 44.89. Gunn exploded off the blocks to an immediate lead. He was tested going into the 3rd wall by both Johnson and Traystman but he had a strong finishing kick that led him to victory.

Wingate’s Jessika Weiss cruised to a 2:16.99 first-place finish in the 200 breast, just a tad off her 2:16.40 record-breaking prelims swim. Teammate Olga Kosheleva took second, while Hopkins’ Maggie Storm dropped 4.8 seconds to finish third. Weiss and Kosheleva gave the Bulldogs some much-needed momentum maintaining a 1-2 lead the entire race. The surprise came from JHU’s Storm who came back to secure 3rd place.

On the men’s side, Nic Eriksson of Queens blew past the field and broke meet and school records, both of which he had previously held, with a 1:57.32. Roman Kanyuka and Damian Smalls, both of Wingate, rounded off the podium with second- and third-place finishes, respectively. Ericsson was out like a bullet, as is his custom. Like his Queens teammates, he excelled in underwater dominance; he extended his lead off each and every wall with strong pullouts.

Hannah Peiffer took another two seconds off the 200 fly meet record of 2:02.29 that she had set in prelims with a winning 2:00.40. That also bested her own school record by .11. Sophia Petrenko of Wingate touched second, while Abby Brown of Johns Hopkins got third. Queens may be a one-trick pony, but when that trick is underwaters it usually does the job. Peiffer led wire-to-wire as she had done in every individual event she competed in all weekend.

Marko Blazevski of Wingate took the final individual event of the evening, just edging his teammate Evan Kolovich in the men’s 200 fly, 1:48.08 to 1:48.76. Christian Yeatts of Queens held off a hard-charging Joel Ax of SCAD to finish third. This may very well have been the difference maker as Wingate trailed Queens by 14 points going into the event but fielded 4 swimmers to Queens’ one.

“I think that every year it gets tougher and tougher to defend our title, and it has created a healthy rivalry between Queens and us. It brings out the best in all the teams. I am proud of the men’s team because it’s been the toughest year to repeat; nonetheless they’ve now done seven in a row. With a taste of the championship from last year, the women knew that Johns Hopkins and Queens would be shooting for them, and they had just enough to hold. I’m just really happy about the overall performance of the teams.”    —Kirk Sanocki, Wingate

Results are posted on the BMC championship central website.