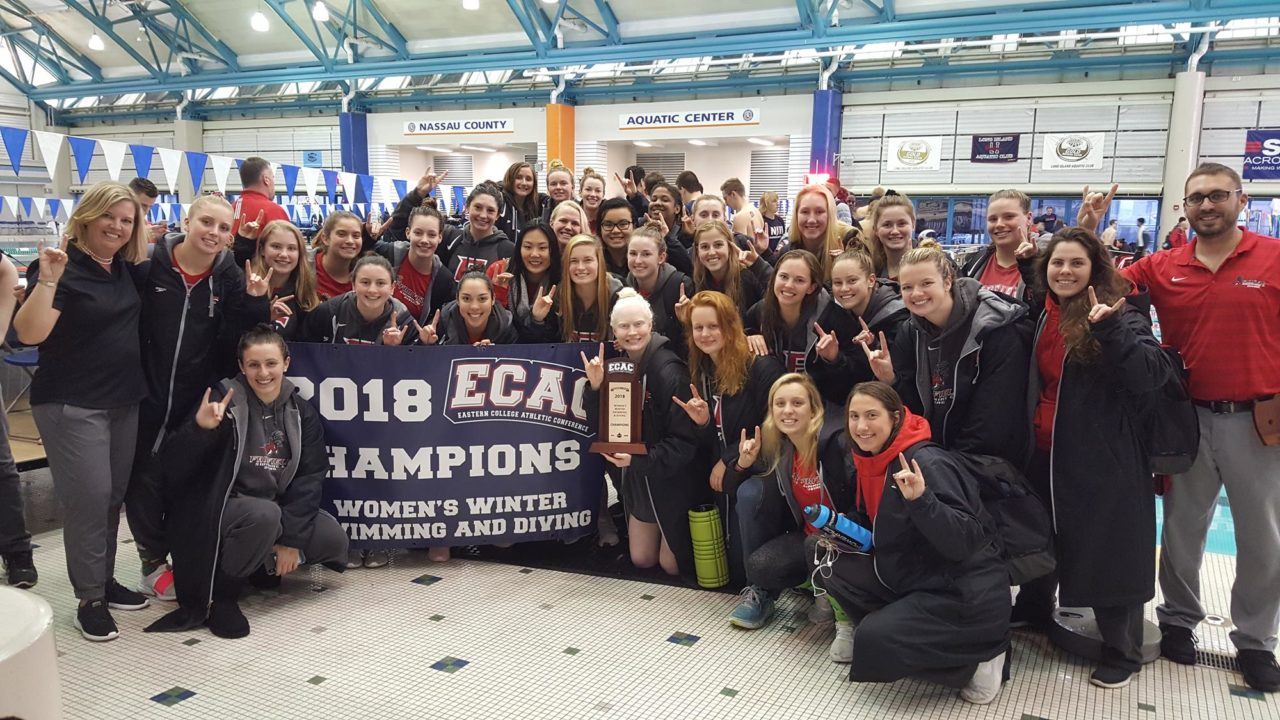 The Stags led by more than 480 points entering the final day, but Maria Nitti, Colleen Young and Sara Ostensen each picked up individual wins Sunday morning to extend Fairfield’s lead. Nitti won the 100-yard Freestyle in a time of 51.39, while Young won the 200-yard Breaststroke in a time of 2:19.61 and Ostensen claimed the 200 Butterfly in 2:04.27. Fairfield won only four events during the weekend, as more than 1,600 of its points came from a constant showing of Stags finishing in the Top 24 of the races. Coach Anthony Bruno was named the ECAC Women’s Swimming Coach of the Meet.

St. Francis College’s Anna Paula Montes Deoca Zapiain was named the ECAC Women’s Swimmer of the Meet after finishing runner-up in the 200 Butterfly behind Ostensen and helping St. Francis to a seventh-place finish in the 400-yard freestyle relay. Earlier in the weekend, she set the ECAC record in the 1650 Freestyle and also won the 200 Freestyle in addition to her role on the SFC relay teams.

Three records fell during the meet, including the 200-yard Backstroke on Sunday. Karis Fuller, a senior from Long Island University-Post, broke her 2017 record of 2:01.26 and the tw0-minute mark with a time of 1:59.99. Fuller also won the 200 IM earlier in the weekend.

Long Island University – Brooklyn concluded the meet with its fourth relay win of the weekend, winning the 400-yard Freestyle Relay in a time of 3:28.97. Freshman Lydia Amon, junior Noemie Lacroix-Moreau, senior Bri Vega and sophomore Amanada Peren teamed up for the win. Brooklyn also won the 200 Medley Relay, 800 Freestyle Relay and 400 Medley Relay during the championship.

Fairfield is the 10th ECAC member to claim the Winter Championship since 1998.

The 2018-19 ECAC Men’s and Women’s Open Swimming and Diving Championships will be March 1-3, hosted by the U.S. Naval Academy at LeJeune Halle in Annapolis, Maryland.

“I am incredibly impressed with our student athletes this weekend” said Head Coach Anthony Bruno.  “We faced tough competition from many different conferences and our men and women responded to the challenge. I felt that the student-athletes were focused and looking to do something special. I thought the staff did a great job prepping the team this week for meet and it showed.”

Bruno was named the Women’s Coach of the Meet after leading Fairfield Women’s Swimming and Diving to their first-ever ECAC Championship.

“I am humbled that my peers voted for me as the women’s coach of the meet” said Bruno. “It is truly a shared award and I could not do what I do without the help of Amy and especially Frisk day-to-day.”

Fairfield returns to competition on Jan. 4 on Staten Island for a meet with Saint Peter’s and Wagner. The Stags are back at RecPlex Pool on the following Friday, Jan. 11, to challenge Holy Cross at 4 p.m.

East Meadow, NY – The Wagner College swimming and diving team completed its fall season with a second-place finish at the ECAC Championships.

The Seahawks finished first among the five Northeast Conference (NEC) schools competing in the meet with 1,332.50 points, trailing only Fairfield University on the weekend.

Warning took first place on the 1-meter board with 230.50 ahead of freshman Maggie Gregory (201.95), while scoring 242.00 points in the 3-meter competition for her second first-place finish.

In addition to her relay performances, Depuydt placed fourth in the 200 Free in 1:53.48.

The Seahawks will ring in the new year with a dual meet against Saint Peter’s and Fairfield at the Spiro Sports Center on January 4.

Fairfield led the three-day meet from start to finish with 1825 points, followed by Wagner (1332.5) and LIU with 1271.5 points in the final tally to stand well ahead of fourth place St. Francis Brooklyn (813.5 points).

On Sunday, both of the Blackbirds standout swimmers this weekend, earned a pair of silver medals in individual events with senior Briana Vega coming in as the runner-up in the 100 freestyle (51.54) and sophomore Amanda Peren taking second place in the 200 backstroke (2:00.18).

In her race, Vega came out of Lane 1 to touch in just 0.15 behind the winner, but 0.35 ahead of last year’s fifth-place pace. LIU freshman Lydia Amon (53.24) scored valuable points with a 10th place finish in race as well. It was Vega’s second solo medal of the weekend, following her gold in the 50 freestyle, a day before. Including relays, she comes back to campus with six medals – four gold, one silver and one bronze, helping score 84 points for the team in the meet.

In the first race of the morning, Peren picked up her third individual medal of the meet in the 200 back, moving up one spot from her bronze medal finish as a freshman. Her 200.18, was only 0.19 away from a win, but goes into the LIU record book as the new program standard, eclipsing the 2:00.67 she set in the same pool at the NECs last spring. Senior Nathalie Meyers swam a season-best 2:03.36 to come in third in the race, just ahead of sophomore Jeanne Touchette-McGowan (2:07.78) in seventh place.

Peren was the weekend’s overall points leader, amongst swimmers from 19 schools in attendance, collecting 111 points for her team, as she won a medal in all eight events she entered. Four golds in relays, three silvers (200 individual medley, 100 backstroke, 200 backstroke) and one bronze (100 butterfly).

Senior Mads Carrigan, who earned the Blackbirds remaining individual medal on Saturday with a bronze in the 100 breaststroke, was the team’s top finisher in the 200 breaststroke on Sunday with a sixth place showing (2:25.05). She also won two gold medals on relays at the meet.

Junior Noemie Lacroix-Moreau slotted sixth in the 200 butterfly on Sunday to lead the team in that race, she also picked up her third gold medal in as many days as the Blackbirds closed out the meet with a win in the 400 freestyle relay, with Amon, Peren and Vega swimming the other three legs. Peren’s 50.78 anchor leg gave LIU a victory by 0.83 seconds over Wagner in the race.

“This is just a tremendous accomplishment for our team,” said head coach Matt Donovan. “For the three seniors that built this program from scratch, to our one junior, our amazing sophomore class and our super six freshman – we now know what team success feels like and that can carry us a long way towards moving up the ladder at the NEC Championships here in February. We hope to come back next year and move up in this meet as well.”

Last year, in LIU’s first appearance at the ECAC Winter Championships, the Blackbirds finished in fourth place with 640.50 points at the Nassau County Aquatic Center. This season the team nearly doubled their previous score, as they bring a team trophy from the 19-school event, back to campus on Monday.

EAST MEADOW, NY – The St. Francis Brooklyn men’s and women’s swimming and diving teams competed at the ECAC Winter Championships and put forth strong efforts throughout the three-day event.

UP NEXT:
The Terriers are back in action on Sunday, January 20, for Senior Day. The men will take on the Merchant Marine Academy, while the women face Queens College.

The team returns to action on January 26th versus Monmouth University.