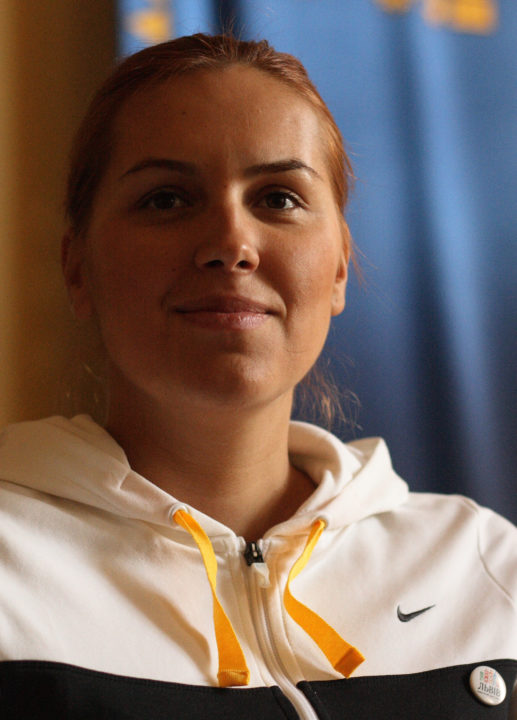 17-year old Yana Klochkova won her first World title at the 2001 World Championships in Fukoka when she dominated the 400 IM. Current photo via Russianname

At just 17 years of age, Ukrainian swimmer Yana Klochkova dominated the IMs, winning gold in both the 200 and 400 at the 2000 Olympic Games in Sydney.

While Japan’s Ayane Sato led through the butterfly leg, Klochkova took over the lead on the backstroke leg and never looked back, finishing in first place in a time of 4:36.98.

The USA’s Maggie Bowen finished second behind Klochkova, while Beatrice Coada of Romania grabbed the bronze.

What is interesting about watching Klochkova is that she does not utilize the underwater kicking technique that had just started to become more common at this time. In fact, her turns would probably be considered weak by today’s swimming standards. Her strength lies in her endurance and technique.

But this fact did not stop Klochkova from defending her titles in both IMs at the 2003 World Championships in Barcelona and the 2004 Olympics in Athens.

In addition, her winning time in the 400 IM at the 2001 World Championships would have earned her an 8th place finish at the Rio 2016 Olympics.

She doesn’t get enough credit. She is still the only female swimmer to get the double/double in the IMs at the Olympics. In addition to the IMs, she is also is a long course world champion in the 400 free and entered the 800 at the 2000 Olympics because it didn’t interfere with her IMs and came out with a silver medal. She won everything there is to win in swimming.

her breaststroke turnover is so fast!