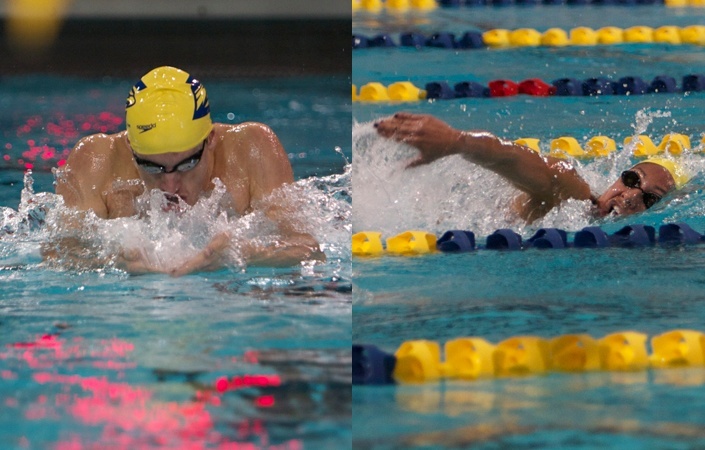 ATLANTA – Both the Emory Men and Women’s swim teams finished in first place after day 1 of swimming finals...

ATLANTA – Both the Emory Men and Women’s swim teams finished in first place after day 1 of swimming finals in the University Athletic Association Swimming & Diving Championships. The Emory women will return to the NCAA Division-III Championships next month as the winners for the past five years.

In preseason rankings, the Emory women rank first, while the men rank third – just behind Denison then Kenyon. That being said, NYU, Wash. U, and UChicago will give the Emory men a fight – seeing as they’re ranked eighth, ninth, and tenth, respectively. Although the Emory women rank first, NYU is close behind at fifth, while Wash. U and UChicago follow at seventh and tenth, respectively. Check below for results for Day 1 of Swimming at the University Athletic Association Swimming & Diving Championships.

In the 200 IM, Emory sophomore Annelise Kowalsky took first with a time of 2:04.46. Kowalsky broke the UAA 2-IM record last year, swimming over a second faster.

For the 50 free, Nancy Larson, the anchor leg on Emory’s winning A relay, touched out teammate Marissa Bergh by just :00.01 seconds! Larson took first with a :23.59.

Emory also captured first in the women’s 400 medley – doing so in a record-breaking time of 3:45.71. The relay consisted of Claire Liu, Annelise Kowalsky, Megan Campbell, and Nancy Larson.

On the men’s side, Emory didn’t every event (like the women), but still came out on top – with nearly every UAA record going down.

While the Emory women have a shoo-in, the men will have to fight harder for first place.

Check back at SwimSwam for updates on Day 2 of swimming tomorrow!