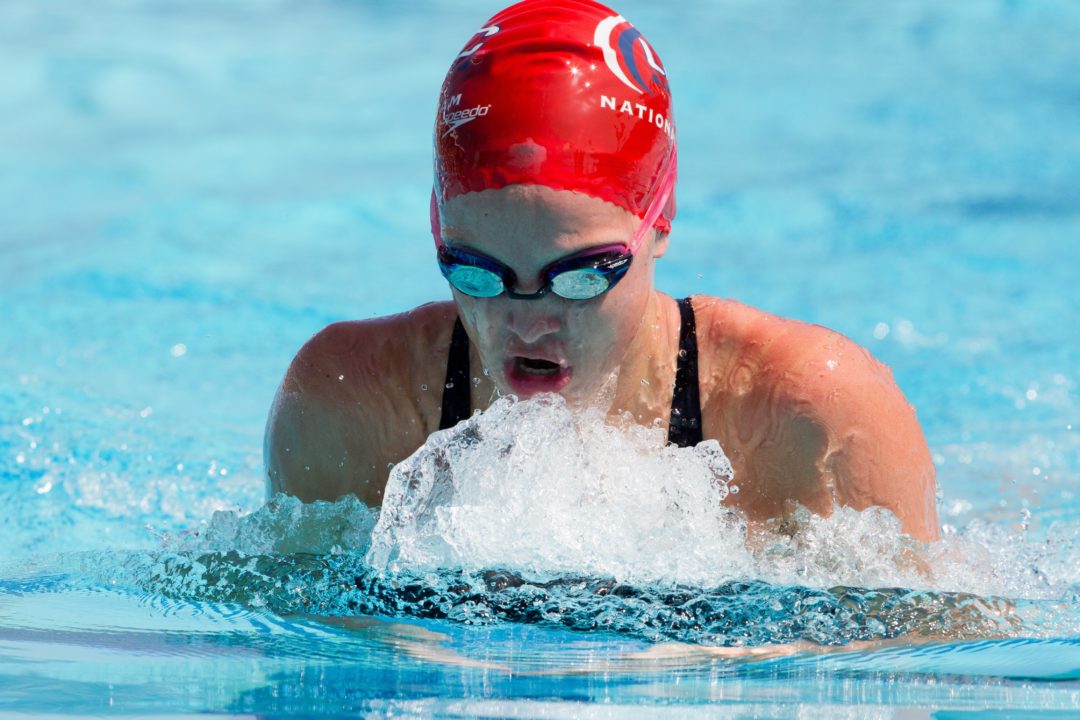 Emily Cameron might be the best recruit you've never heard of. It's time to become familiar with her. (Photo Courtesy: ©Tim Binning/TheSwimPictures.com)

15-year old phenom Katie Ledecky finished her meet with a win in the 800 free in 8:33.48. That’s a solid time for her (though still a hair off of what she swam at the Missouri Grand Prix last month). The youngest of the American distance swimmers are developing (Ledecky, Leah Smith, Rebecca Mann) more in the Katie Ziegler mode where they swim fast frequently in-season, as compared to the Chloe Sutton mode where they are beat-up in season and have monster tapers at year’s end.

Megan Rankin out of California took second in 8:43.90.

In the 200 IM, Rachel Bootsma was everybody’s star, and she looked every bit of that in the yards prelim with a top seed of 1:59.28 (the only swimmer under two minutes in that prelim). But in finals, she was challenged big-time by Emily Cameron out of the Lancaster Aquatic Club in Pennsylvania.

Bootsma went out very well in the race, which was not a surprise to anybody. But Cameron has some big-time international experience of her own as a member of the 2010 Junior Pan-Pac team and didn’t panic. She’s a dynamite breaststroker and made up about a two-body-length deficit on that leg alone to jump out into the lead. She didn’t relinquish that lead either, and in fact extended it, to take a win in 2:16.13. Cameron’s long course swimming plateau’ed last summer after her great run at 2010 Jr. Pan Pacs, but she’s continued to advance bigtime in yards (she’s extremely versatile there), including breaking State Records in both the 50 free (22.75) and the 100 breaststroke (1:00.5) at this year’s Pennsylvania High School State Championships. Her versatility probably makes her a top-5 recruit in next year’s class, behind Missy Franklin.

Bootsma took 2nd in 2:17.82 on the back of a bad breaststroke leg. That might be an area that Teri McKeever could use her at Cal (they’re really not very deep in IM’s after Caitlin Leverenz), but she’ll need to do some work on her breaststroke for that to happen. If she did so, she could be a dynamite IM’er. Sarah Haase, who has no trouble on breaststroke, was 3rd in 2:18.74.

The future Cal bear Bootsma had some huge successes, however. Right before that 200 IM, she posted a 27.84 in the 50 back. That’s the fastest time in the world this year, and makes her the 12th-fastest swimmer in the history of the world in the event. The time was just .04 away from Hayley McGregory’s American Record of 27.80. That would be a National Age Group Record, though USA Swimming doesn’t track 50 meter records in the 17-18 age groups.

In the men’s version of the 200 IM, the Northern Kentucky Clippers’ Maxwell Williamson took his 2nd event win of the day with a 2:02.96. He out-dueled Ty Stewart, who was 2nd in 2:03.60. That, incidentally, is a new Mississippi state record.