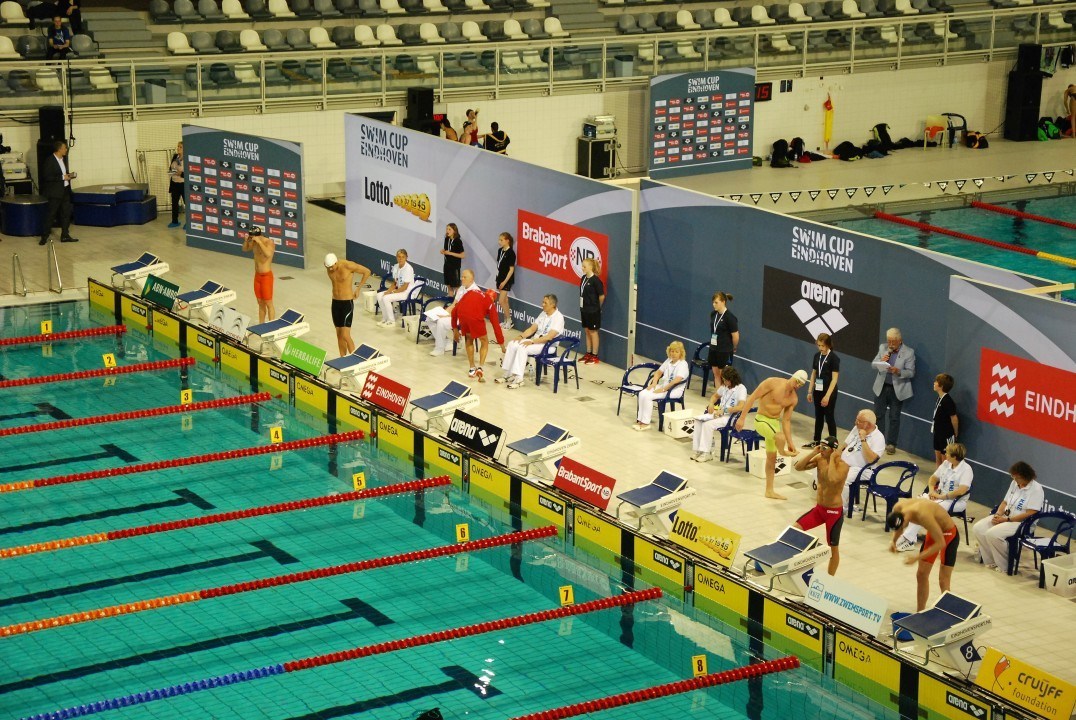 The 2016 edition of the Swim Cup Eindhoven, Netherlands, is an Olympic qualification event and also the competition schedule has been set follwing the Rio timetable for the swimmers this summer: Heats start at 12.00 pm, B-finals at 7 pm and A-finals at 9 pm. In Rio, heats will start at 12.00 pm, finals at 10 pm. The Swim Cup Eindhoven offers with a great facility and atmosphere a possibility to compete under the unusual Olympic schedule – and tonight was the second finals session with many of  the top athletes from the Netherlands, Belgium, Serbia, Germany, and Denmark, among other nations.

Finals and semi-finals started at 9 pm in this order:

The first victory of the evening went to para-swimmer Olivier van de Voort with a new Netherland’s IPC record in 2:14,69 in the 200 m IM – he gained one more IPC point (899) than second place finisher Marc Evers. Marlou van der Kulk took the win in the women’s 100 m backstroke IPC final in 1:07.18.

Hungary’s Evelyn Verraszto who was the top seed in the women’s 100 fly after clocking 59,77 in semifinals, scratched the final as well as Germany’s Paulina Schmiedel. So we saw 16-year-old Julia Mrozinski, Germany, on lane 4 next to Germany’s Lisa Höpink, 17 – two of the fastest and most versatile German youngsters. In the final, Netherland’s Elinore de Jong touched the wall first in 59,92 (FINA A cut: 58,71), Belgium’s Kimberly Buys took the silver in 1:00,03 and Kinge Zandringa (NED) clocked third in 1:00,09. The German youngsters finished on the fourth and fifth place, Mrozinski in 1:00,41 and Höping in 1:0055.

Kira Toussaint broke a meet record twice at the first and second session, she went 1:00,51 in the 100 m backstroke in wednesday’s morning heats and 1:00,50 in the evening’s semi final. Toussaint, still representing her American collegiate team, the University of Tennessee, was just about half a second off the Dutch national record in the event. Kira took the big win in the final with another meet record in 1:00,25 – 0,04 second over the FINA A cut, this swim places her 18th in the actual world ranking. Second went to Maaike de Waard (NED), followed by Tessa Vermeulen (NED) in 1:02.09.

The 200 m men’s backstroke seemed to be an easy game for some of Germany’s fastest backstrokers: They clocked 1-2-3-4 in prelims in this order: Christian Diener 2:00.14, Carl-Louis Schwarz 2:05.47, Felix Wolf 2:06.00, 7, Jacob Heidtmann 2:06.67. Diener, Schwarz and Wolf are training partners at the Potsdamer SV – their coach is Jörg Hoffmann, former world class swimmer in the 400 m and 1500 m freestyle. Potsdam is the German backstroke power house – even if their chief coach Hoffmann was a mid and long distance freestyler. Christian Diener is the 2014 silver medalist in the 200 m backstroke at the European LC Championships. Jacob Heidtmann, who trains with Germany’s fastest short distance butterflyer Steffen Deibler in Hamburg, made his first huge international final at the World Championships last year and touched fifth in Kazan in the 400 m IM. Heidtmann grabbed second in the 400 m freestyle yesterday – under FINA A cut.

Today’s morning highlight for the men came in the form of the 100m freestyle race, where Dutch native Sebastiaan Verschuren touched in 48.65 for the fastest time. His personal best is a 47.88 from the London Olympic games. Verschuren managed to swim his semi final at about 10 pm in a time of 48,77 and he is the top seed for tomorrow’s final.

Only Netherland’s Robin Neumann managed to swim under the 2-minute threshold in the 200 m Freestyle in prelims with a time of  1:58.51. Her Dutch teammate Andrea Kneppers, who swims for the University of Louisville, earned the 3rd seed after today’s prelims, finishing in a time of 2:00.43. Teen phenomenon Marrit Steenbergen touched fourth in 2:01,42 this morning after she set a new Dutch youth record yesterday in the 4 x 200 m freestyle relay in  1:57.91, a personal best by over a second. Femke Heemskerk whose perfomances in April 2015 at the Swim Cup placed her as the sixth fastest 100m freestyle swimmer of all time, and the fourth fastest 200m freestyle swimmer of all time, got a kind of “wild card” for the 200 m Freestyle semi final – because she competed in yesterday’s 4 x 200 Freestyle relay – the press agent of the Eindhoven Swim Cup Niels Cannegieter told us that “She swam the 4 x 200m yesterday. Therefore they spared her for the prelims. As she will be one of the fastest of the world nobody doubted her qualification for the finals.” Netherland’s Esmée Bos, who was on the 11th place after the 200 m freestyle prelims, sratched her semi finals participation.

Femke Heemskerk lived up to her reputation as the favourite and claimed the win and top seed for the final in 1:56,61 – fast enough to stay under the FINA A cut (1:58,86) and  her fastest time in the 2016 season, she now sits 13th in the world ranking.
Women’s 200 m freestyle finalists: