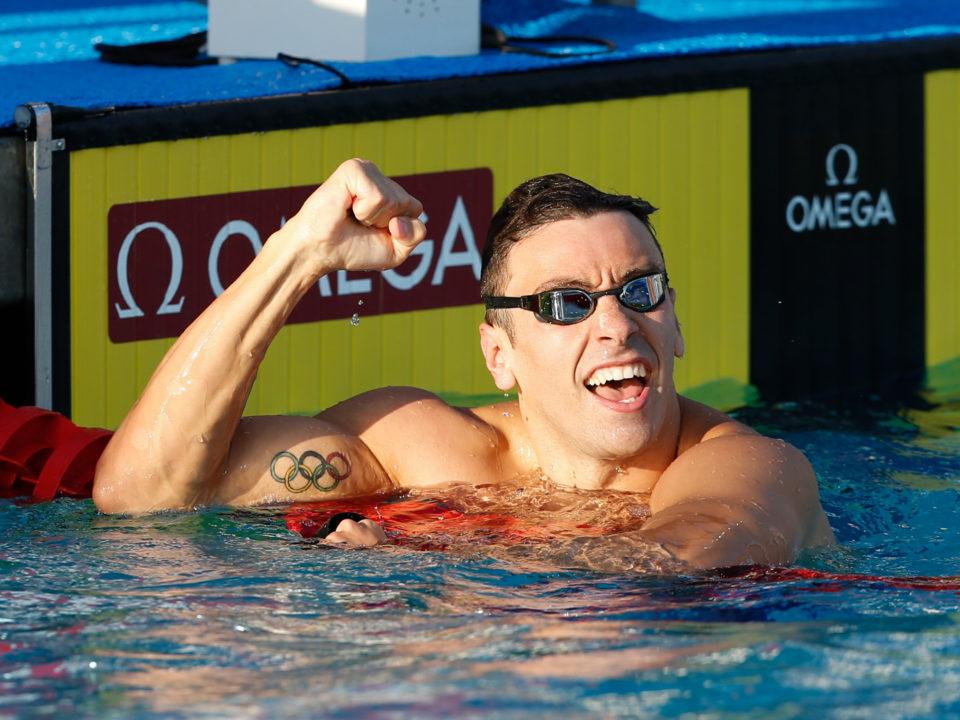 A trifecta of records kicked off the final night of swimming here in Eindhoven, as Japan’s Daiya Seto, China’s Wang Jianjiahe and Sweden’s Sarah Sjostrom all made their mark on the first stop of the second cluster of the 2018 FINA World Cup.

Below are the links to the specific posts regarding these records:

In other events, Kathleen Baker of the United States followed up her national record yesterday in the 100m back with a solid 200m backstroke victory this evening. Clocking a time of 2:00.85, Baker hit the wall over a second ahead of Aussie Emily Seebohm, who settled for silver in 2:01.91. Iron Lady Katinka Hosszu of Hungary rounded out the top 3 with a time of 2:03.76.

For Baker, her effort tonight fell within striking distance of the American Record of 2:00.03 set by Missy Franklin during the 2011 World Cup Series. Looks like this record is on notice for next stop.

The men’s 100m backstroke saw Mitch Larkin of Australia beat the field, touching in 50.08 for the win. He holds his national record in 49.03 set back in 2015, the year he became double World Champion in Kazan. Behind Larkin tonight was Japanese mainstay Ryosuke Irie in 50.22 and Russian Grigory Tarasevich who took bronze in 50.79.

38-year-old Nicholas Santos clinched his 2nd gold of this stop, winning the men’s 50m fly in 22.08. He hit the wall just .01 ahead of South African Chad Le Clos, who notched 22.09 for silver. Also in the mix was Russian speedster Vlad Morozov, who finished in 22.42, as well as Dutchman Jesse Puts.

Puts produced a time of 22.74 to match the Dutch National Record set by Basitaan Tamminga at the supersuited European Championships back in 2009. American Michael Andrew finished 5th in 22.78.

In the freestyle arena, Sjostrom also won the women’s 100m sprint in 51.21, holding off day 1’s 50m freestyle winner Ranomi Kromowidjojo of Netherlands, who took silver in 51.42. Femkee Heemskerk was also solid with a time of 51.73 for bronze.

Blake Pieroni of American earned his nation its 2nd gold this evening behind Baker, taking the men’s 200m freestyle in 1:41.83.  That’s a new personal best by well over a second for the former Hoosier, who came within .75 of Ryan Lochte’s 1:41.08 American Record.

In fact, with his 1:41.83, Pieroni became the 3rd fastest American performer ever in the event, sitting only behind Lochte and Conor Dwyer. He also moves into the top 25 performers of all-time worldwide.

Emily Seebohm swam a very respectable breaststroke. Did not know she could swim it that well, until she also got bronze in the 200 IM. Congratulations to her & all the others for their great performances.

Years ago she did a 33 lc around the time she was doing 2.09.6 200ims. Maybe she is taking 200im a bit more seriously. That is not far off Liesels national record .

Doubt it, she swam breaststroke at the pan pac trials recently too.