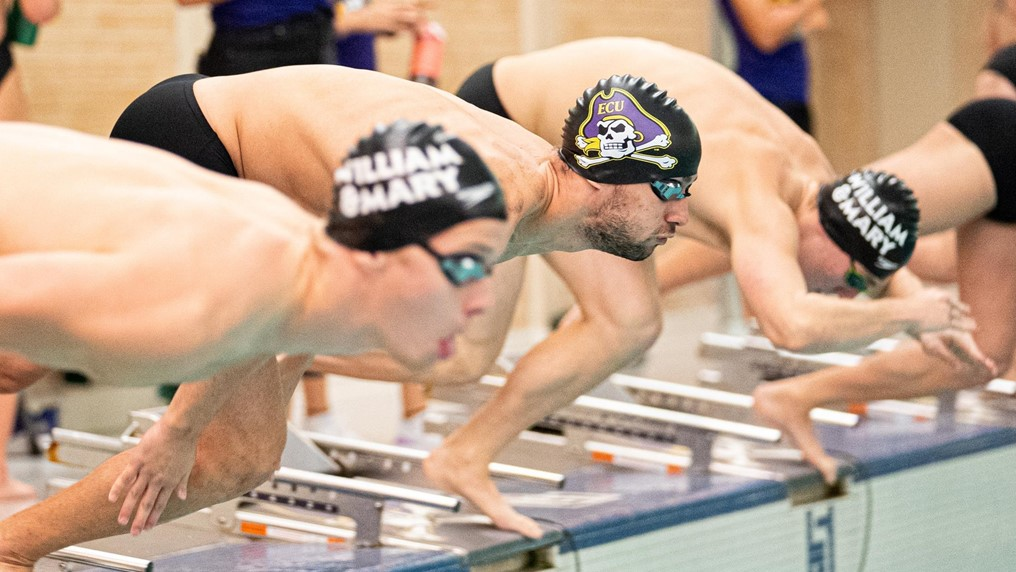 The East Carolina men posted a 176-101 win over William & Mary, while the women's team notched a 173.5-99.5 victory over the Tribe. Current photo via East Carolina Athletics

GREENVILLE, N.C. — The East Carolina men and women’s swimming and diving team swept a dual meet from William & Mary at Minges Natatorium on Saturday. The men’s squad posted a 176-101 win to improve to 2-1 on the season, while the women’s team upped its record to 2-1 as well with a 173.5-99.5 victory.

“It was a great meet on both sides,” ECU head coach Matthew Jabs said. “William & Mary is a championship level program, and our meets with them are always exciting and full of energy. We were very happy to finally be home in front of our fans. We had a packed house again today and we are very grateful to everyone who came out to support us.”

The ECU men placed first in 10 of 14 events beginning with the 200-yard medley relay team of Marek Osina, Lyubomir Epitropov, Gustavo Santos and James Ward setting a pool record with a time of 1:30.51.

Demsar, Santos and Ward were joined Pedro Guieros in the 400 freestyle relay and combined to establish a new Minges Natatorium record with time of 3:02.60.

Shannon Stotts led the ladies team by recording two individual first-place finishes and was a part of a pair of relay winning teams. She swept the butterfly events, winning the 100 by 2.96 seconds over teammate Victoria Gillet with a time of 2:07.81, then edging out Lise-Lotte Bentin by 0.66 seconds in the 100 with a mark of 56.42.

She swam the third leg in both the 200-yard medley and 400-yard freestyle relays.

Silvia Alessio posted the top score on the 1-meter diving board and Anna Otto on the 3-meter springboard. Kristen Stege touched first in the 500-yard freestyle.

The Pirates will return to action Saturday, Oct. 19, at 1 p.m. inside Minges Natatorium as they host Campbell (women only), Catawba and Lenoir-Rhyne.

The William & Mary women’s swimming team picked up four wins on Saturday in its first road meet, but was unable to overcome a powerful East Carolina team, falling 173.5-99.5.  The Tribe moved to 0-2 early in the year, while the Pirates improved to 2-1 overall.

How it Happened
– Despite the loss, W&M showed significant improvement from a week ago, improving its season-best time in six of the 12 individual events, and swimming a conference-best in the 400 free relay in its first attempt of the season.  As usual, the Tribe started the meet down 32 points due to diving.
– Junior Megan Bull (Hillsborough, N.J.) was once again among the team leaders, winning the 200 free in 1:51.93 and finishing second in the 500 free at 5:01.61, just a second off her own dual-meet record.  Both those times also improved her position atop the Colonial Athletic Association in those events.
– Also winning for the second week in a row was sophomore Missy Cundiff (Leesburg, Va.), who swam 23.71 to remain undefeated in the 50 free.
– Freshman Peyton Proffitt (Richmond, Va.) picked up her first collegiate victory, taking the 200 IM in 2:11.67.
– W&M also won the final event of the day, the 400 free relay, with the team of Katie Stevenson (Wilton, Conn.), Tara Tiernan (West Hartford, Conn.), Cundiff, and Bull combining to swim 3:31.56, the fastest time in the CAA so far this season.

The William & Mary men’s swimming team broke another record on Saturday, its 10th of the season, but could not overcome East Carolina on the road, falling 176-101.  The Tribe moved to 1-1 on the year, while the Pirates improved to 2-1 overall.

How it Happened
– As usual on the road, W&M started the meet down 32 points due to diving.  Despite that, the Tribe put forth its usual strong effort, improving its season-best in five of the 12 individual events and setting a conference-leading time in its first attempt at the 400 free relay.
– Senior Jack Doherty (Middletown, Conn.) broke his own dual-meet record in the 100 fly, set just last week, after taking second in the event in 49.12 seconds.  That was 0.01 seconds faster than he swam last week at home.
– The Tribe also won four individual events, coming for four different seniors.  Chris Balbo (Short Hills, N.J.) started things off with a win in the 1,000 free in 9:38.45 for his team-leading third win of the season.
– Next was the 100 back, where Colin Demers (Virginia Beach, Va.) won for the second week in a row, this time in a season-fast 49.85 seconds.
– Ian Thompson (Alexandria, Va.) also won his event, the 50 free, for the second consecutive week, stopping the clock in 20.94 seconds.
– Wrapping up the wins was the 100 free and senior Colin Wright (Williamsburg, Va.), touching the wall in 44.52 seconds to keep pace with Balbo with three wins on the year.

Up Next
William & Mary stays on the road next weekend, traveling up to Maryland to face CAA-rival Towson on Saturday, Oct. 19, at 1 p.m.