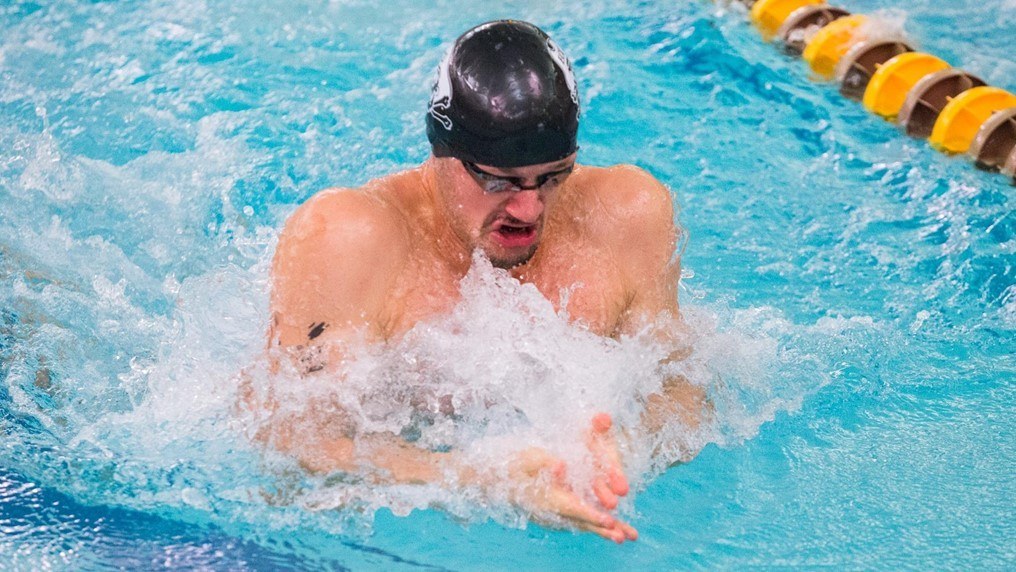 On the final night of the 2020 AAC Championships, the East Carolina men came from behind to pull off a 7-point victory over defending champion Cincinnati. The Houston women secured their 4th-straight AAC title.

East Carolina freshman Kristen Stege swam to a new Meet Record in the women’s mile. She took over 3 seconds off the former record set by Sara Wanasek of Cincinnati in 2018, winning the race in 16:11.98. This appears to have been Stege’s first swim in the event based on the USA Swimming database. Tulane freshman Lilly Byrne made a huge drop to take 2nd. Her 16:15.69 was a best by 25 seconds. Teammate Olivia Johnson, the 2019 champion, dropped over 12 seconds to take bronze in 16:18.63.

Houston’s Peyton Kondis picked up a sweep of the breaststrokes. She was just 3 tenths shy of her best as she took the 200 breast title in 2:09.93. That was her 2nd time breaking 2:10. Kondis was tenths away from the Meet Record, which stands at a 2:09.29 done by SMU’s Andrea Podmanikova in 2018. Podmanikova transferred out of the AAC and now swims for NC State.

Teammate Mykenzie Leehy completed the sprint sweep. Leehy, who won the 50 free and took silver in the 200 free, won the 100 free on day 4. She once again went head-to-head with fellow Cougar Zarena Brown after Brown had outpaced her in the 200. This time, Leehy got to the wall first in 48.67, just a hundredth shy of her best. Brown was also just shy of a best as she touched in 48.98 for the silver.

SMU’s Caleb Rhodenbaugh pushed ahead of ECU’s Jacek Arentewicz on the 3rd 50 of the 200 breast. Arentewicz kicked it into gear on the final 50 to close the gap, but Rhodenbaugh held on to win in 1:54.74 to Arentewicz’s 1:54.93. Rhodenbaugh had never been under 1:55 before this meet, but swam his lifetime best twice as he matched his prelims time to win the final. He also matched Arentewicz’s 2019 winning time down to the hundredth. Both men were narrowly shy of the Meet Record, which Arentewicz set at a 1:54.55 in 2018.

Great meet for all involved. Still can’t believe the pirates came out on top. What a surreal meet.

Great job to all the teams including Cincinnati, SMU and UCONN especially. Can’t wait to face off against SMU and Cincinnati again next year and good luck UCONN in your new conference. I’m glad we managed to out-perform expectations! Hope to see y’all in some other meet soon!

Finally someone on this team stepping in and showing leadership.

Weird that it had to be a freshman, but leadership knows no age.

Great swimming this week Adam. Good luck with the rest of your ECU career.

Let’s try to not fuel a comment war please. I just want to see everyone end this on a high note of a competition that came down to the very last race and showed that all these programs have something great to show out there.

East Carolina – bringing the comments with the same (lack of) class that they exhibited throughout the meet lol.

Excuse me how so?

Cincinnati celebrated to early, they already had shirts made, uh oh 🙁

Shirts are premade by the conference with no team listed. Cincinnati never assumed they would win the meet; they knew it could come down to the last relay. No celebration took place. Do research and make more accurate observations before you make faulty assumptions next time.

What are you talking about? The parents were basically having a parade celebrating outside the pool before finals started. What happened to the cakes saying conference champs? Feed the hungry.

You gotta fix this projection thing I thought Cincinnati would beat ecu by 200 points? Well i guess not #purplegold

It’s really weird how mad you guys are after winning a conference championship meet.

We’ve explained it a dozen times. Swimulator isn’t making predictions. It’s scoring a meet based on season-best times. You outperformed your seeds. Good for you. That’s what you set out to do, isn’t it?

I thought you had the Pirates coming in 3rd by a wide margin in the swimulator and the experts picks?

Hey Gears. The swimulator scores things based on mid season, so those rankings are purely mathematical. As for the SwimSwam picks, it can be hard to know exactly what will happen. You never know who from what team might really outperform their old times or season bests or who might not quite hit the mark, for example. We do what we can with the information we have. But it’s not a slight to anyone.