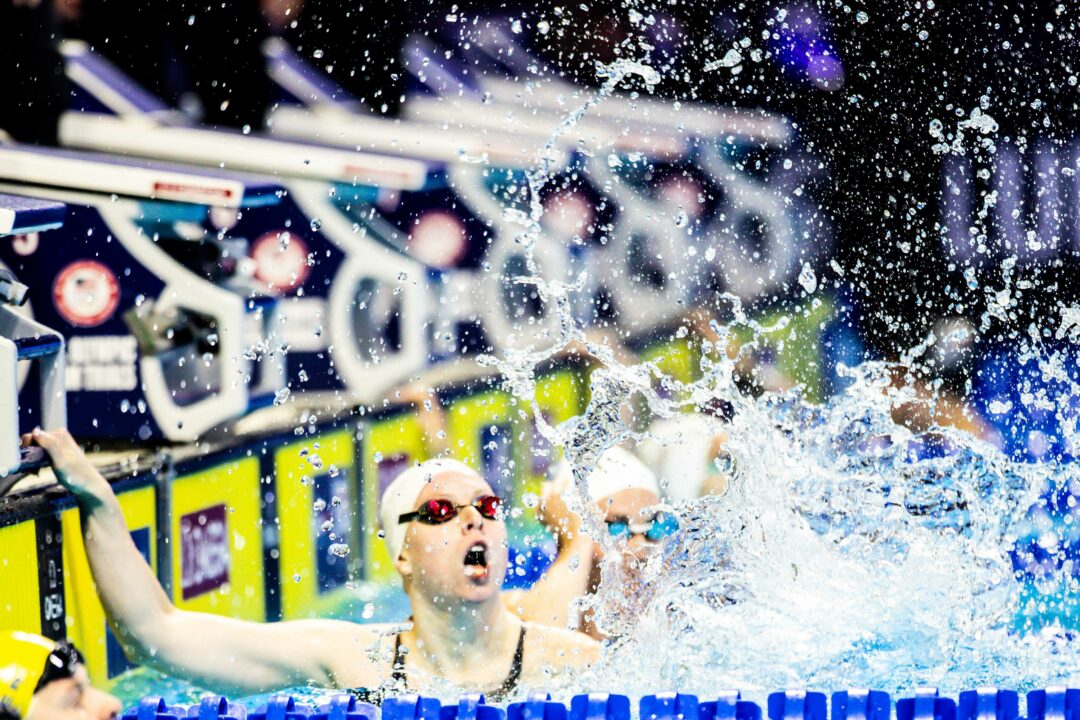 The field has tightened up considerably, but the U.S. still has something no one else does: a 1:04-breaststroker in a field of 1:05s and 1:06s. Archive photo via Jack Spitser/Spitser Photography

When the U.S. broke the world record with four relatively young swimmers (17/22/24/22) in 2019, it looked like we could be seeing a potential dynasty for a nation that won Olympic gold in 2016, then Worlds gold in both 2017 and 2019. But the world is closing in fast, and we’ve got three true gold medal contenders up in this top category.

For the U.S., Smith has the potential to be faster – she was 57.5 when setting the world record back in 2019. King has never been significantly faster on relays, but is the world record-holder at 1:04.1. The 18-year-old Huske is an Olympic rookie. Weitzeil has split 52 plenty of times before. The wild card is Simone Manuel, a potential 51-second split for Team USA who missed the Olympic team in the 100 free. She’s on the team as a 50 freestyler and could be a coach’s decision to join this relay at the end of the meet if she recovers well from three weeks away from training this spring.

Australia has the new world record-holder in backstroke with McKeown. They’ve also got McKeon, one of the top fly legs in the field, and one of the most dangerous anchors in Campbell. Breaststroke is really the only hurdle for Australia – they lost 1.2 seconds to the U.S. on that leg in 2019.

All of these teams have the ability to get out front, or at least stay with the lead pack, on backstroke. That’s an absolutely key element to getting your breaststrokers and butterflyers clean water. Canada also has a bit of a breaststroke issue, but they’ve got the defending world champ in butterfly, plus the defending Olympic champ in the 100 free.

The most likely scenario is a dead heat through backstroke, with the U.S. pulling out to a breaststroke lead. Then the run-down will begin, with MacNeil, McKeon, Campbell and Oleksiak trying to run down the less-experienced U.S. back half.

These two are probably outside of medal contention unless something wonky happens with one of the top three. China should have an excellent back half – Zhang Yufei might wind up with the best fly split of the field. But they’ll need more out of the front half to stay in the race.

The British team won Euros by two full seconds, going 3:54.0 – so don’t put too much stock in this aggregate time exactly. Dawson should stick with the top backstrokers out of the gate. Anderson is a relay machine on the anchor leg. Laura Stephens swam the final of this relay at Euros and split 57.5. She could be an option over Jones.

Japan has a really high ceiling… but they’ve got a real puzzle to solve. Rikako Ikee could swim fly or free, depending on her status coming off of a battle with leukemia. Natsumi Sakai is the top backstroker this year, but also the top 100 freestyler after Ikee. Here are two potential lineup options based on season-bests:

Italy could take advantage of the breaststroke weakness across almost all of these contenders. Martina Carraro is the new national record-holder and a strong breaststroker. Italy was third at Euros in 3:56.3, with Arianna Castiglioni taking the breaststroke leg.

Sweden has all the pieces to be elite here… but their best swimmer is coming off of a broken elbow that might blow the whole operation. Sweden was fourth at Euros without Sarah Sjostrom. Current projections (with season-bests) would have them back in the 3:57s, but if Sjostrom can come anywhere near her world-record-level 51.7 speed, they rise to just outside the top three in a hurry.

That freestyle leg is the big question mark for the US. If Weitzel can go a 52 then she can probably hold off a charging Cate Campbell, but it’ll be tight.

I think the best Weitzeil has gone is a 52 high, and Campbell is at least a 51 high so if the deficit after the fly leg is anywhere close to 1 sec, Aus has a good chance.

If Cate is in the water within that of any US swimmer other than a suddenly in form Manuel I like her chances.

Any options for Curzan or Douglass to anchor this medley relay?

Why though? Neither of them are faster than Abby.

It’s not implausible, but it would take one of them really doing something special, and maybe one of the top two freestylers struggling, for that to happen – ala what we saw at the 2019 World Championships with Regan Smith leading off the 400 medley relay in spite of not being in the 100 back individually.

Given the overall challenges of the US this year in sprint freestyles, it’s within reach. That being said, it would probably have to be BOTH, because unless they were genuinely worried about the prelims relay not qualifying to the final, they probably wouldn’t make that shakeup just to drop a few tenths in the heats.

No way they’re dropping a veteran for rookies. They’d have to go 52.6 in prelims to justify it. That ain’t happening.

Also, this is a 400 medley relay. So it’s not a free relay “prelims finals” situation. Something really unusual and unexpected would have to happen for any prelims 400 medley relay swimmers to race in finals. But, maybe they give Kate a crack at the 400 free relay prelims to see what happens there.

But if Kate pops a 2:07-low in the 200 IM, while Abbey and Erika Brown both go 54s in the 100 free individual event…they’d sure think really hard about making that change.

I think Worlds in 2019 had the distinction of people qualifying a year out from the meet.

Gets even more controversial if they add Simone. This is probably Weitzeil’s best shot at gold and she earned it at Trials by beating Simone.

Team USA will conduct time trials at the Olympic Team Training Camp. Don’t be surprised if Katie Ledecky is swimming in the final of the women’s 4 x 100 meter freestyle relay at the Tokyo 2021 Olympics as was the case at the 2016 Summer Olympics.

Abbey and all Team USA swimmers earned the right to be on the team. No one earned any right to swim a relay.

The coaches decide who is on the relays, and they will do a good job selecting the four fastest swimmers.

How the heck did USA Swimming even allow Kathleen Baker to swim at the 2019 FINA World Aquatics Championships with a bruised/broken rib?

I think the US team need to be very careful about overcomplicating and overthinking the options and making things worse.

Debating Curzan, Douglas, Manuel etc. betrays first and foremost a lack of faith in Weitzeil. There’s a pleasing purifying quality to the US trials and people seem to want to keep swimming the 100 free especially until they get the result that they want. Weitzeil won and unless she has a disaster in the 100 free (which probably won’t happen) she’s earned the right to swim.

Did not realise the Australian aggregate was actually faster than the US. Ok, it’s 0.02,but still. So much is going to hinge on Kaylee vs Regan and then whether Chelsea can hold her own and which Lilly King comes to swim.

This surprised me too. I had thought that the US were still favourites but it’s really too close to call. Canada are then really the clear favourites for bronze in this one.

… At this stage at least. The sprint freestyle relays are a little bit different in this respect because we won’t be much wiser when they line up – but by the time the medley relay happens we should have some inkling what kind of shape people are in from the individual swims.

imagine your team consists of two reigning world champs and a reigning Olympic champ, all in the appropriate events, and you seem solidly third best!

Given the first three legs for the US are basically right at the WR for their legs it is kind of amazing that this one looks close.

Because Australia also have 2 legs right at the WR (McKeon’s fly a small stretch), and another that is the WR.

Both teams have 1 bad leg.

Yes, not sure why Aus isn’t listed first

Abbey has what it takes to hold off a charging C1 and Penny! Gold medal USA!

If abbey weitzeil can work on that back half at training camp, I really think she’s going to surprise us all as USA’s top sprinter this year, and even a medal contender.

Well she already is the top sprinter for the USA – first in the 100 and second in the 50 at Trials. However, I don’t see her as a medal contender.

Well she’s had years and years to work on that back half, what makes you think she can make rapid progress in a month

Australia is ahead of america by 0.02 sec

Out of respect for Manuel, can we come to some consensus as to what she is recovering from? Some stories it’s OTS, in this story it’s from taking three weeks off in the spring (and if anything she probably did better than she otherwise would have had she not taken the time off).

They’re related. The treatment for OTS is almost complete rest for an extended period,

Absolutely. But the phrasing as “recovering from three weeks off” makes it sound like she took a vacation, not that she was recovering from a condition.