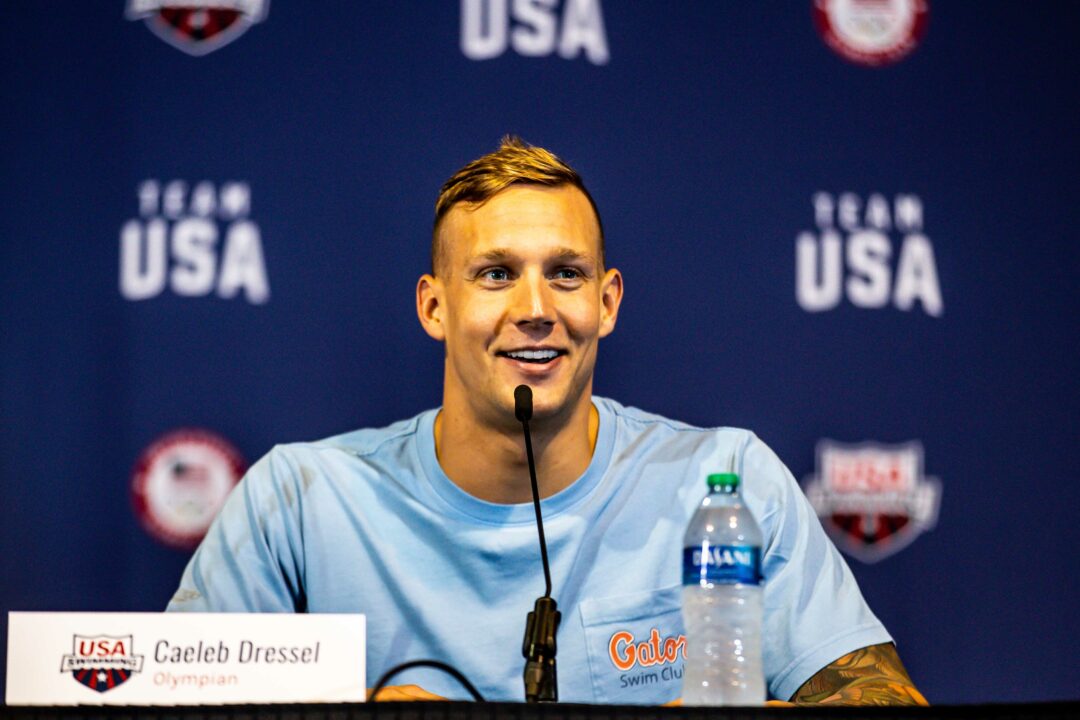 50 free champions Simone Manuel and Caeleb Dressel spoke with the press after the conclusion of the final session of the 2021 US Olympic Trials. Current photo via Jack Spitser/Spitser Photography

50 free champions Simone Manuel and Caeleb Dressel spoke with the press after the conclusion of last night’s session. Dressel earned his 3rd win of the week, while Manuel made the Olympic team with her last chance after missing the semis of the 100 free earlier in the meet. Manuel described her emotions as the race ended:

Yeah, when I touched the wall, I literally was like, please God please! Then I turned around, I turned to my right, and I just saw Abbey shooting over the lane line, so I was like, okay I at least got first or second, so I’m on the team.

Then to turn around and see the first place was amazing. I had to sit back and say, thank you God. Because, like I said, I wouldn’t have made it here without the be strength that he’s given me to continue on this path.

It was a tough week for veterans this week, as stars Nathan Adrian, Anthony Ervin, Matt Grevers, and Ryan Lochte missed making the team. Dressel described how different the team would be without that group this go-around.

To be honest I’m not ready for a team without Nathan. I told him that. What he brings to the team, all those guys, big guys, literally all of them are pretty big guys. What they bring, their impact, what they present to the team is huge.

They left behind some really big shoes to fill. I’m not ready for them, and I have to be. It doesn’t just fall on my shoulders. I think everyone who is on the team, we’re going to have to pick up the pace, because what they left behind is huge from all of them.

Dressel was asked about it what to meant to him to see the Florida Gator men sweep the freestyle events this week, after current Gators Kieran Smith and Bobby Finke won the 200/400 and 800/1500, respectively.

Whoa! I forgot! Someone talked about that. I didn’t even think about that. I guess I haven’t had time to think about it. I’ll text Bobby and Kieran and let them know I think the boys did all right there. Funny, we’ve got a good group going. I’m sure you guys have talked to them. They’re class-act guys. I am excited to be on the team with them, I look up to both those guys, I’ve said it before.

And Bobby was even talking “heat” in warm-up. He was saying he wanted to race me. I was warming up for the session and Bobby said he wanted to race me a 25. I didn’t want to embarrass him, so I kind of let that one go.  But both those guys are awesome. Looking forward to being USA teammates with them.

Why did Dressel have to mention that he first beat Adrian in 2017? Didn’t really need to be said.

0
0
Reply
Unbelievable at the end
Reply to  Joel

Your average blooming superstar could have forgotten about his old role-models as soon as he started to surpass them, but that clearly wasn’t Caeleb. He’s had a 4 years to do that since ‘17, but he clearly holds people like Adrian in a high regard, and for good reason. Dressel said nothing wrong.

Can Adrian go with the team as the team manager or something? I’m sure his presence will be appreciated by the athletes and coaches.

Dressel is a class act. Funny because to me, he’s like the new mini Adrian. He’s humble, he’s good to his fans, and he is clearly thinking about the USA team, the future of swimming, and sportsmanship. Every time he interviews, like Ledecky, he talks about his teammates and praises other competitors. To me, this is where Michael Andrew has a lot to learn. I get that he trains alone and has no teammates but every time he talks it’s always “we” meaning his family and his coaching and never about “we” his competitors or his future teammates. Of course I think it’s commendable he is thankful for all his family has done for him. I’d like to see him… Read more »

If they are asking him questions about himself he should directly answer it.

I reckon Adrian actually has some big shoes

According to wikiFeet (didn’t realize such a thing existed until I googled “Nathan Adrian shoe size”) he’s only size 11.

That seems too small…

I don’t think Wikipedia is accurate on this one

Braden, Mel, we’ve got some hard hitting journalism that needs to be addressed! Get on this story!

breaking news: IOC adds the 25yd free as an event and only Caeleb Dressel and Bobby Finke can race it, winner gets all the gold medals and world records the loser owns

Lol, Finke wanting to race a 25