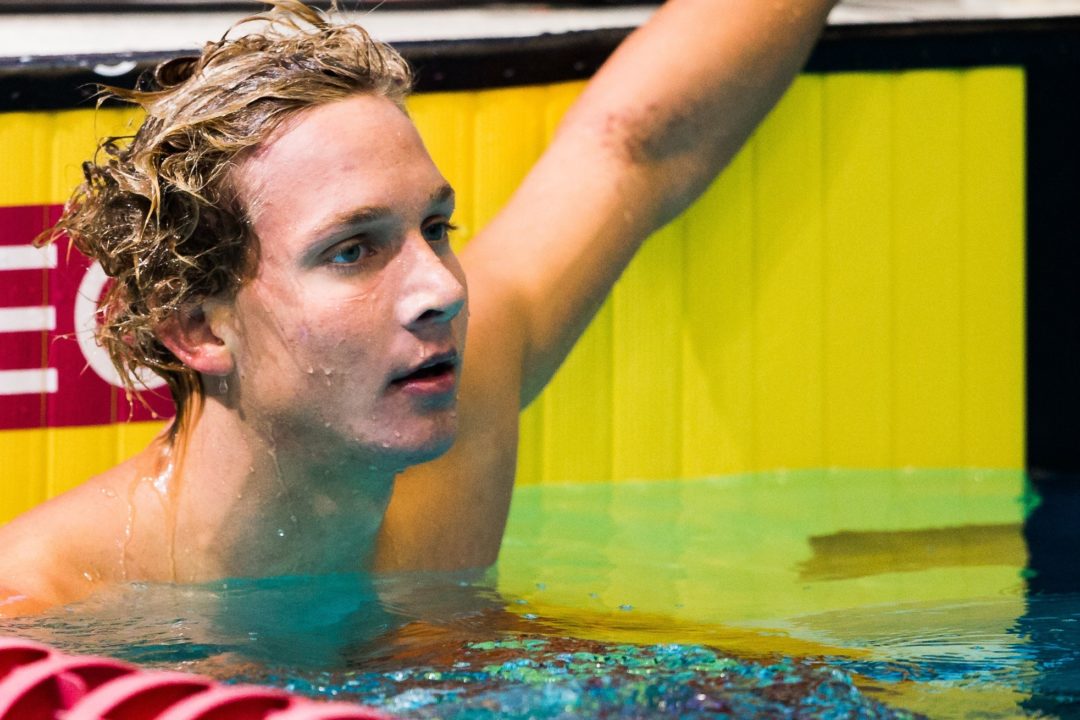 In his third swim in 45 minutes, Caeleb Dressel has broken the National High School Record in the 100 yard fly at the FSPA Invitational in Stuart, Florida.

After breaking the 50 free before the diving break, Dressel came back with a 45.89 in the 100 yard fly. He was joined by club teammate, but high school rival, Joseph Schooling, who was a 46.20 in Saturday night’s finals session.

Both swimmers were under the 46.50 overall record that Schooling set at last year’s Florida 1A High School State Championship meet. Schooling, who swims for Bolles, will end up with the National Private High School record, and Dressel will take the public mark away from Connor Black, who was a 46.71 this spring.

The progress this pair is making is unbelievable. Dressel broke the National High School Record in the 100 yard fly by more than 6-tenths of a second mid-season. And this isn’t even what we thought to be his primary event – though he said in a SwimSwam interview at the Junior World Championships that he would be toying with different races this season.

For comparison’s sake, Dressel’s time would have placed 5th at the 2013 NCAA Championships (three of the four swimmers faster than him were college seniors) and Schooling’s would’ve placed 10th. That’s in an event that is dominated by older swimmers – the top 15 at NCAA’s were all juniors or seniors.

Dressel’s swim was the second-best ever among American 17-18’s, sitting behind only the 44.91 that Tom Shields did as a freshman at Cal. Dressel has almost two full seasons, including his first presumed NCAA Championship meet, to break those records.

He and Schooling swim in different classes of Florida’s 4-class structure, so they won’t run into each other at the state meet, but expect both swimmers, both seniors, to take this record down again.

Seriously though, where is he looking into college? USC? Michigan? Texas? Crazy amout of talent; I really would love to see him do the 200 free at his taper meet now that he already has the 50 record. He should swim the 200fr/100 fly/lead of 200-400 free relays..then he could break 4 individual records. Crazy; but possible.

Can we get a video?

i have videos of both races on my cell phone

…and you are going to upload them to youtube?!

Thanks Wonkabar! Illinois hs results are still in the stone age…

No need for insults. Black is a boss. But Caleb f*****g Dressel is a monster. I thought glad was scary good when he was young…

He continues to impress … was a beast at Juniors and is still swimming fast.

Go pro young Caleb! Forget the NCAA’s and those hollow records in SCY. Step up to what matters since your well on the way to being an international superstar.

Missy and Ledecky should have gone pro.

But Dressel still have a lot of things to prove. Also, male sprinters has longer “life-shelf” so to speak, so no rush for him.

First a 19.36 in his 50, then he even beat schooling in arguably his best event. Dressel’s an animal.