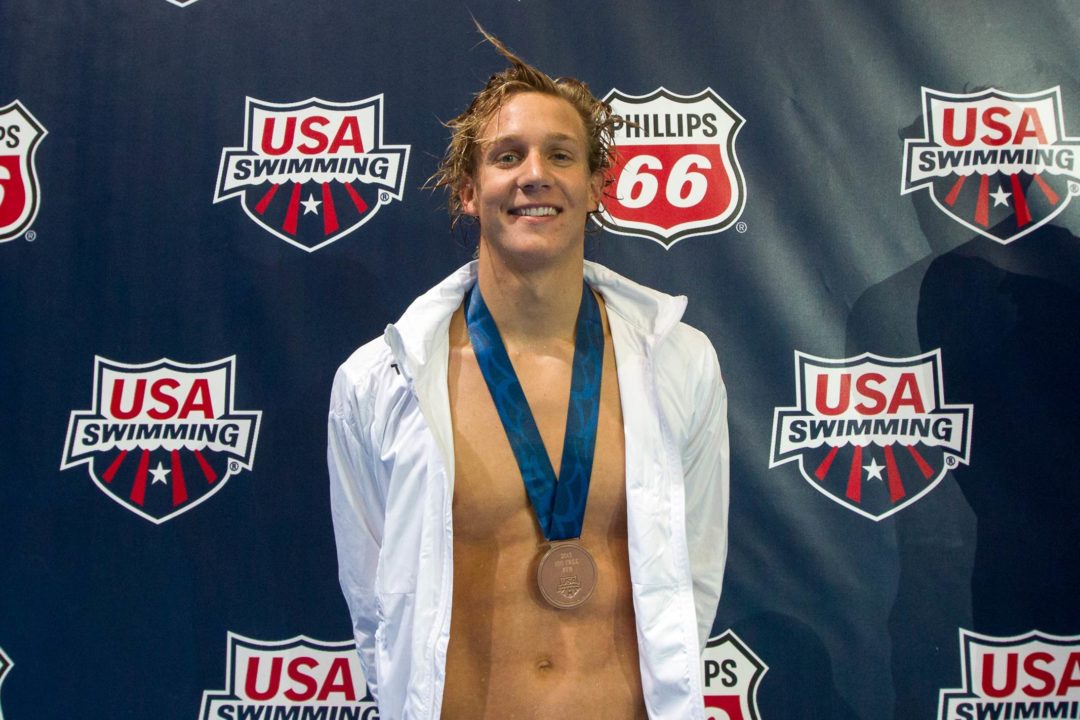 Shortly after, Clay High School senior Caeleb Dressel broke the National High School Record in the 50 yard freestyle. At this mid-season meet, with little-to-no rest, Dressel swam a 19.36. That broke the 19.43 done by Vlad Morozov of Torrance High School in California.

After splitting a 24.99 50 yard breaststroke split (unbelievably fast for a high school swimmer in its own right), Dressel came back about 20 minutes later to break his first ever National High School Record, as well as the 17-18 USA Swimming National Age Group Record. The old 17-18 National Age Group Record belonged to Seth Stubblefield, who was a 19.41 as a freshman at Cal in 2012, and Dressel only turned 17 just over a month ago.

Dressel’s potential now becomes truly terrifying. If he’s going National High School Records mid-season, and if we can draw any comparison between the improvements of the Bolles-trained swimmers in 2012 at this meet and their state meet (he swims for Clay High School, but trains primarily under Jason Calanog and the Bolles club team), there is a distinct possibility of a sub-19 second 50 yard free.

Schooling and Dressel were not the only swimmers with impressive times in Florida today.

In the women’s 200 free, three swimmers were under 1:50. Michelle Turek won with her time of 1:49.19. CeCe Williams touched second at 1:49.34 and Jessica Hodgson was 1:49.81. Williams has won several state championships, and is one of the favorites to win this event at the state championship again this year. This year, though, her Chiles High School stays in 3A, while Turek’s Eastlake moves up to the new 4A classification. Willliams was 1:47.5 in the 200 freestyle last year. Turek is a junior this year, and is already closing in on her best 200 free time of 1:48.11 at an in season meet. Turek won her second individual event of the night, posting a 51.35 in the 100 freestyle later in the session. On Saturday, Cece Williams later won the 500 freestyle in a time of 4:53.03.

Olga Lapteva won the womens 100 breaststroke in 1:05.67. In the men’s 100 breaststroke, three swimmers were under 1:00. Joshua Chen won in 59.20, Corey Klemm and Jason Tillotson were second and third.

To finish the evening, Caeleb Dressel led off the 400 freestyle relay, splitting 43.13. He was .50 off of the National High School Record in the 100 freestyle. The Bolles School won the relay, but a major contribution of their 3:06.38 came from their leadoff leg. The results say that it was Luke Georgiadis, who was 3rd in the 100 free, but our inkling is that Schooling actually swam that leg. Whoever it was led off the relay for the Bolles School in 43.97.

This was a very fast meet, especially considering that this was an in-season meet. It is exciting to see these times coming out of Florida, and I am excited to see what these kids can do when they are suited, shaved, and tapered!! Congratulations to everyone who participated in the FSPA High School Invitational.

These high school records are nuts. It’s hard to believe how fast they are these days. Yikes!

His 19.36 are a little disappointing compared to his 45.89.
But I continue to believe in a possible sub 19 in the next few weeks when he will be fully tapered.
What was his record before in the 100 fly?
Correct me if I’m wrong but I don’t remember he had already swum under 47.
Mr Dressel maintains the momentum of his great summer.
2 high school records so early in the season, it’s not common!
Congrats to him.

Thank you for the news.
So, almost 2 seconds better than her previous PR!
Very impressive!

I had the great pleasure to be there! both caeleb and joseph were suited up. caeleb was a bit rested, but not tapered. joseph was not rested at all. caeleb had about a 15 minute break between the 50 free and 100 fly. joseph had about 20 minutes between the 200 im and the 100 fly. it was a great race, about even at the last turn. both kids have great underwaters, but caeleb was a bit better tonight and he got to the wall first. a truly remarkable performance by both! also, it was joseph who led off the bolles relay with a 43.9, to caeleb’s 43.1! what a night!!

I can’t wait to see what these guys can do with a full taper at the end of their season.

So, just wondering- was Dressel wearing a jammer?

Also, how many of these other top times were done in practice suits vs. knee suits?!

Nice times. Maybe a coach who was there can weigh in. What’s the percentage of top 3 swims in a racing suit?

Yes, he was wearing a jammer (a pink LZR Elite), thanks to the videos from Bobo.