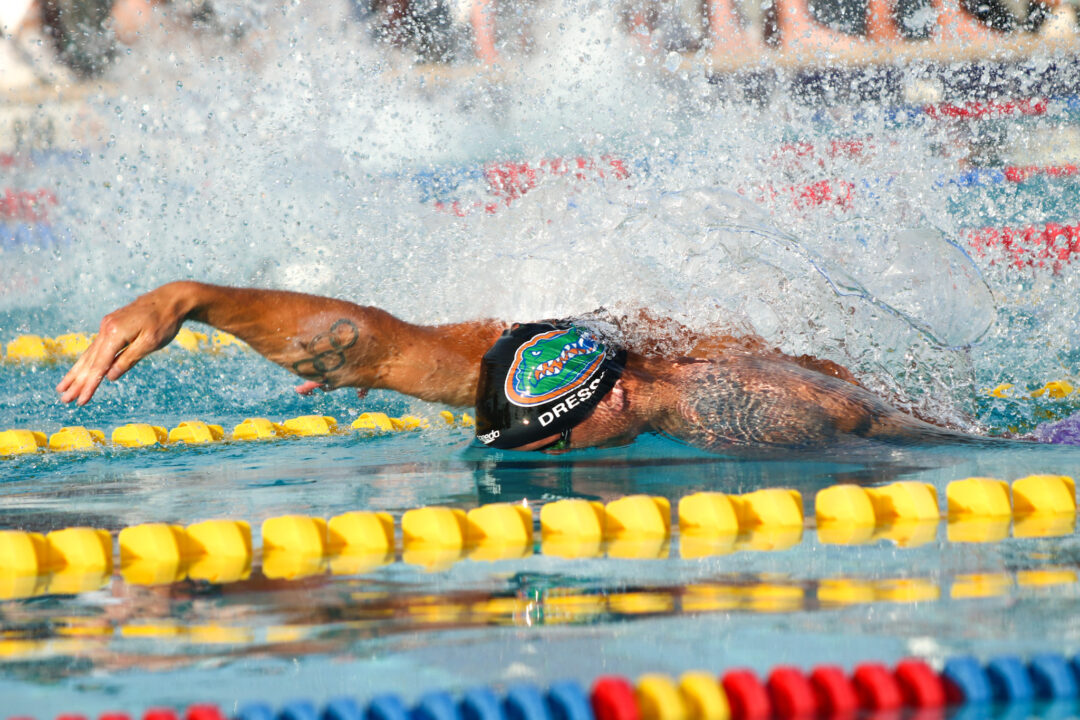 On the final day of swimming at the ISCA Senior Cup, Caeleb Dressel set himself up for another 2 wins tonight in the 100 free and 200 fly. Current photo via Jon Reiter/Jon Reiter Photography

The final day of racing got underway on Saturday morning at the 2021 ISCA International Senior Cup.

In the men’s 100 freestyle, Caeleb Dressel posted a 42.03 to claim top seed by over a second as Arsenio Bustos came in with a 43.27 for second. Christopher Guiliano was third in the prelim field with a 43.72.

That swim for Dressel trails his fastest ever swim of 39.90 which he swam at the 2018 NCAA Championships for the Florida Gators.

Notably, Ryan Lochte also swam the 100 freestyle in prelims and earned 12th in the event with a 45.01.

Dressel was also the quickest 200 butterflier in the prelims as he swam his way to a 1:40.68, followed by Texas grad Jack Conger‘s 1:42.85. Dressel’s former Florida teammate Grant Sanders was the third fastest with a 1:45.75.

Farida Osman has a shot at picking up her fourth win of the meet tonight in the 100 freestyle and will head into the final as top seed with a 48.56. Her PB in the event is currently a 47.07 which she swam at the 2017 NCAA Championships for Cal. She will be joined in the final by Sherrison Dressel as second seed (49.20) and Marina Spadoni (49.20) as third seed.

Kyleigh Tankard and Katelyn Bergin were separated by only 0.16 seconds in the 200 butterfly prelim as Tankard posted a 2:00.70 and Bergin a 2:00.86. Tankard, a UNC commit, has been as fast as a 1:57.94 before which she hit earlier this month at the 2021 Virginia VSI Short Course Senior Champs. Julimar Avila touched with a 2:02.09 prelim swim to secure third seed heading int0 tonight’s final.

Nicole Frank Rodriguez will try to earn her first gold medal of the meet in the 200 breaststroke final following her field-leading prelim swim of 2:15.29. That swim for Rodriguez was a new best time in the event, beating her 2:16.06 from December 2020. Rodriguez has collected three medals so far as she took silver in the 200 IM and 100 breast, along with a bronze in the 400 IM.

Zoe Skirboll and Ava Franks were a second behind Rodriguez in the prelims with a 2:16.65 and 2:16.96, respectively.

In the final event of the meet, Nils Wich-Glasen will lead the field into the 200 breast A final as top seed thanks to his 1:53.26 swim this morning which was just ahead of Ilya Evdokimov‘s 1:53.28. Wich-Glasen and Evdokimov, separated by just 0.02 seconds were around two seconds ahead of third seed Johnathan Rutter who was a 1:55.38.

The final session of racing will get underway at 5 PM Eastern.

If Dressel ever focused on or tapered for the SCY 200 fly, could he have gone close to a NCAA record?

Oh definitely. The man clearly has the endurance for 200s but his easy speed would probably be a 44 high taking out his 2fly.

Dressel v Milak v prime Phelps would have been an interesting battle in SCY 200 fly.

Yeah and Milak isn’t tapered either!

Please tell me his exact training sets (since you are obviously either him or his coach and know exactly where he is at in his training).

Dressel is the greatest SCY swimmer ever on the planet, he has the explosiveness off the start and walls, and the butterfly speed and endurance to take the win.

Phelps can’t compete with Dressel’s raw speed, but his superior underwaters should have him beat out Milak.

MP (and I think this applies to Milak too) has this remarkable ability to hold his speed in the 35 – 50m segment of a LCM length. It’s part of the reason why I think MP, even with his remarkable underwaters, might not have been as insane a short course swimmer as we might expect.

Apples and oranges comparison. NCAA swimmers are rested and tapered while Dressel is in heavy training. Dressel wasn’t even at absolute best in the ISL and broke the WR in 3 events and the AR in another.

how many events could Dressel have A-finaled in at NCAAs if there was no limit?

Im using what i believe are his best 50s:

Assuming he can go around a 21.5 50 backstroke, and accounting for relay takeoffs and going all out for a 50 rather than a 100, it is safe to say that 4 Dressel clones could demolish the medley relay record.

Probably not many because he would get dead tired after doing those triples and quadruples.

But which events he had the potential to final? Imo every one except the 1650.

Thanks for clarifying that’s yards

Who goes faster tonight Dressel or Hoffer? I think Hoffer tapered in a suit at a Championship takes it by a second.

Finals will be swam in lc

bold strategy when Dressel is in play

That picture has got to be the first stroke off a breakout, right? I mean, his head is down but almost completely out of the water.

Yeah, I’m assuming it looks like that because of the way he has a final dolphin kick through the breakout.