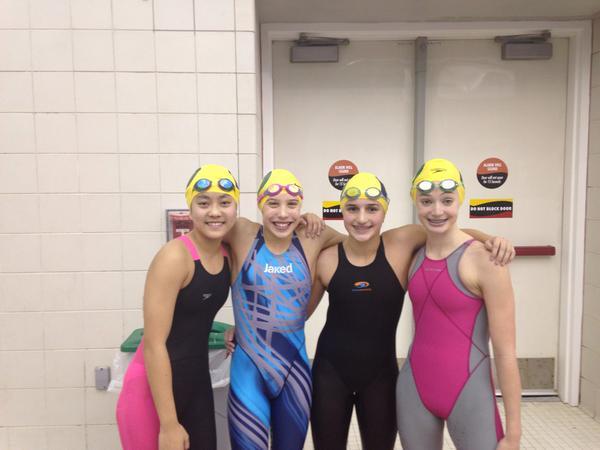 In the mid-day session of the Tom Dolan Invite in Maryland on Friday, the 11-12 girls 400 free relay from the Delaware Swim Team cracked the National Age Group record in winning the event. Stock photo via Nicole Warner

The Dynamo Swim Club held the 2020 Doug Coers Modified Pentathlon at their home pool in Atlanta, Georgia this past week.

In the mid-day session of the Tom Dolan Invite in Maryland on Friday, the 11-12 girls 400 free relay from the Delaware Swim Team cracked the National Age Group record in winning the event.

Two teams got under the previous record, which was a 3:37.71 set by Irvine Novaquatics in 2011. But Delaware crushed the record, going 3:35.90 to take nearly two seconds off of it. Also getting under the record was Nation’s Capital, which took second in 3:37.16.

The Delaware team was made up of all 12-year-olds: Chelsey Liu, Bella Warner, Isabella Paoletti and Chase Travis.

Here’s a look at the girls splits on the way to that record-breaking finish:

Warner and Travis were two of just a couple girls to break 53 in the event, and Travis’s anchor split was the field’s fastest. The previous record-holders, from Irvine Novaquatics, were Courtney Mykkanen, Taylor Newton, Carly Perri and Aislinn Light.

You can find full results of the Tom Dolan Invite here, or on Meet Mobile.