Defending Texas 5A, 6A State Champs to Meet in 1st Annual ‘Super Quad’ 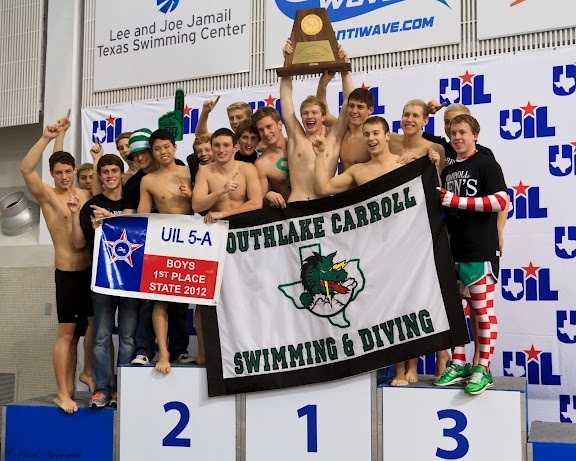 The defending Texas 6A boys from Southlake Carroll will be part of a monumental showdown in central Texas this weekend.

In the 5A class (smaller schools) the Vandergrift girls dominated this past year’s state field and took home the 5A crown winning by over 60 points. Belton’s Coach Patrick Henry, who is hosting the meet, has named it the 1st Annual Super Quad.

When asked what it meant to host a meet of this magnitude in the middle of the Texas high school season Coach Henry replied “this time of year it is all about the racing and we are going to have some fun and fast racing this weekend”. He went on to add that this type of meet is something he hopes to make a tradition and keep hosting. “I would love to have the top teams in the state get together and race in a small meet environment where we are not restricted to the entry limits of bigger meets and all our kids get a chance to race”.

This meet also serves as a “lance chance” meet for any swimmers trying to pick up their cuts for the North TISCA mid-season Invitational in two weeks. Last year Southlake Carroll and Austin Westlake did not see each other at a meet until the mid-season TISCA Invite where Southlake dominated both the boy’s and girl’s competition.  They met again in the 6A state championship in February where Southlake won the boy’s championship, Westlake won the girl’s championship, and in the total team scores Westlake edged out Southlake 323 to 312.  This weekend should provide some fast racing and a sneak peak of what lies down the road in the Texas High School Championship Season.

Westlake is gonna crush southlake, it’s so predictable, just look at all the best times from westlake and compare them to those of southlake. Southlake should be scared about their state streak because it is going to come to an end.

Yeah how’d that work out.

The scores speak for themselves.

I don’t see that happening. Unless Westlake grabbed a Diver out of the sky who is going to score for them they will enter the State Meet down at least 20 points before even entering the water. It will be too hard to make up that many points with the way Soouthlake can dominate their region and qualify somebody in every event. Westlake will have to make out of the Region of Death first.