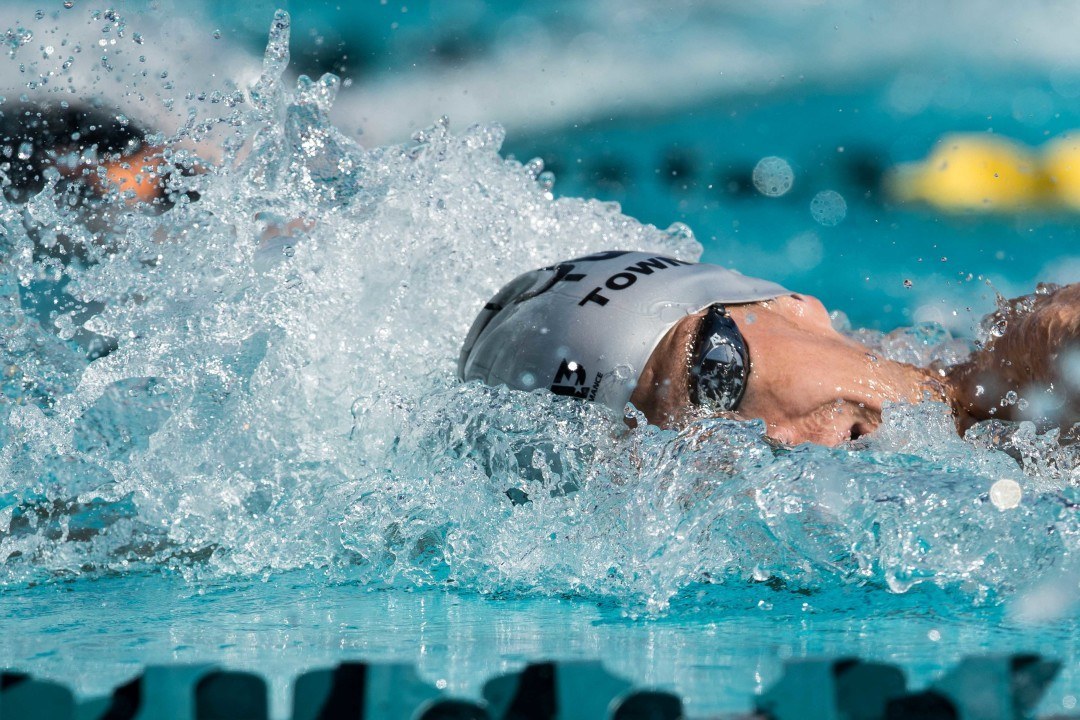 While competing at the 2016 Sun Devil Masters Heatstroker meet over this past weekend, American Darian Townsend made a monster dent on three Masters World Records. Archive photo via Mike Lewis/Ola Vista Photography

While competing at the 2016 Sun Devil Masters Heatstroker meet over this past weekend, American Darian Townsend made a monster dent on three Masters World Records.

Not successfully punching his ticket to Rio for the stars n’ stripes, the 31-year-old is now turning to the Masters circuit to inflict his elite swimming damage, an arena in which he already owns 3 Masters World Records as a member of YMCA Westside Silverfins. In addition to his current Masters World Records in the 50m backstroke (25.98), 100m backstroke (55.93) and 100m butterfly (53.65), this weekend Townsend added new marks across two freestyle and one IM event.

The former Arizona Wildcat NCAA swimmer kicked off his record-sinking siege scoring a new 400m freestyle WR in 3:58.13, overtaking the previous mark of 3:58.42 held by Australia’s Daniel Kowalski from 2009. Townsend followed that up with a new 100m freestyle WR mark with his sub-50 outing, touching in 49.80 to surpass fellow American Adam Ritter’s record of 50.34 from last year. Finally, Townsend nabbed a new 400m IM Masters World Record, topping the field at Mona Plummer Aquatic Center in Tempe in a swift 4:20.81. That crushed the previous WR held by Pole Lukasz Wojt at 4:24.11 from 2013.

Post-Masters meet, Townsend told SwimSwam that, “with a little more rest going into [Olympic] trials I could have swam closer to my lifetime bests which would have at least gotten me into the semi-finals. It’s clear by the times I swam on the weekend that I am in shape. Going into trials I just didn’t have the easy speed I needed to start my races. I had to work really hard on the first 50 and as a result couldn’t finish. Having easy speed in my races (100 and 200 free) is essential. Lesson learnt.”

Keep it up, Darian. The Tokyo Olympic Trials seriously right around the corner!

True, but Hackett is the greatest distance swimmer of all time, multi time Gold Medalist and World Record Holder, and he couldn’t make his Olympic team which is weaker than the US team. It’s hard to imagine a scenario where Townsend can go 48 mid/1:47 at worst to make the US Olympic team.

Not a masters swimmer but good swimming all the same.

Not a masters swimmer, good swimming all the same.

Care to explain that comment? You should probably start with your definition of masters swimmer and why.

No thanks to both.

Masters world record holder, done in a masters meet, by a 31 year old.

It’s not really an “opnion” issue.