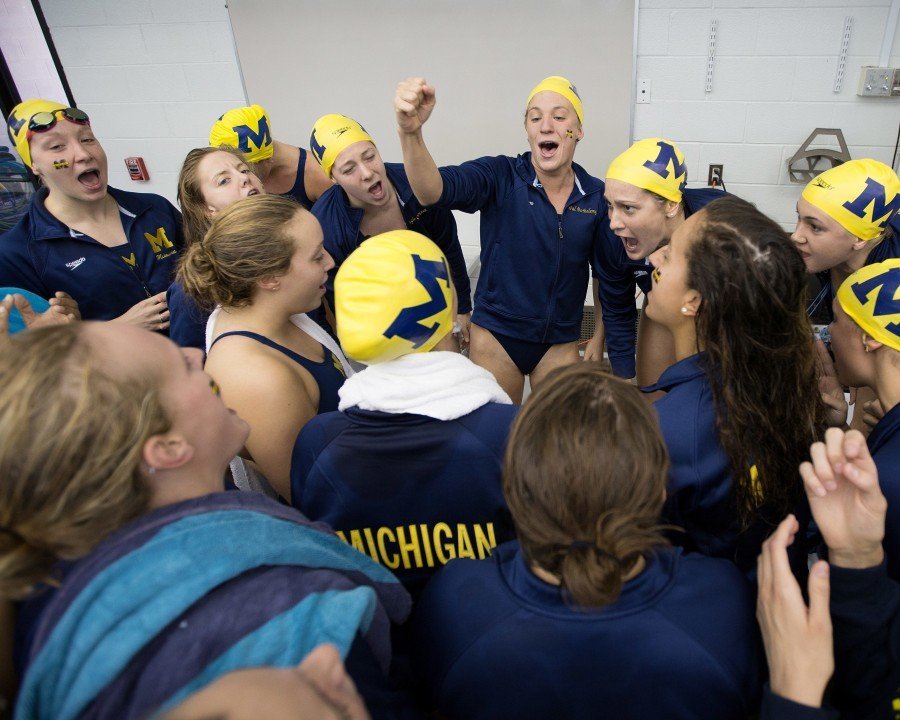 The Michigan women head into 2016-17 with a good chance at repeating as Big Ten champions. Their freestyle group has plenty of scoring potential in both sprint and distance, which bodes well for their free relays as well as the individual points. Archive photo via Michigan Swimming & Diving

The Michigan women made huge strides in the 2016 post-season, cracking the top 10 at the NCAA Championships for the first time since 2008. Their 10th place finish was a major upgrade from the 22nd place they posted in 2015.

The women also became Big Ten conference champs, taking the title over Indiana in their home pool and winning for the first time since 2004. That gave them their 15th championship title in program history, more than any other program in the conference.

The Wolverines’ sprint free group will have to make up for the loss of Ali Deloof, a finalist in the 50 and 100 freestyles at NCAAs and member of 4 relays, but they still have a very strong sprint crew for this season.

One of the Wolverines’ top returners is sophomore Siobhan Haughey (47.71), who should continue to have a major impact after winning the 100 free at Big Tens and placing 11th in the event at NCAAs. Aside from Haughey, the women have several Big Ten scorers coming back this season, such as sophomore Catie Deloof (22.97, 49.30) and senior Maddy Frost (22.66, 49.84), who scored in both sprint free races at Big Tens.

In terms of relays, the Wolverines have plenty of talent to fill the gaps, but it helps that 3/4 of both sprint free relays at NCAAs are returning this season.

The Wolverines hauled in a lot of their points from the distance freestyle races, and will return NCAA scorers G Ryan (4:38.43, 15:58.54) and Rose Bi (4:35.69, 15:45.26) this season. Bi was an All-American last season, taking 3rd in the 1650 and 5th in the 500 free at NCAAs. Ryan was just outside the top 8 in both of those races with a pair of 9th place finishes. The distance duo gives Michigan the potential to bring in A-final points for 2 swimmers in both events at NCAAs.

In the 200 free, Michigan has plenty of scoring potential in G Ryan (1:45.24), Siobhan Haughey (1:43.35), Gabby Deloof (1:45.71), and Becca Postoll (1:45.84). Haughey is looking particularly dangerous after placing 5th in the event at her first NCAA meet. In addition to the individual prospects, Michigan is bringing back their entire 800 free relay from last year’s NCAAs (G. Deloof, Haughey, Ryan, and Clara Smiddy).

Clara Smiddy (1:56.74) also brings scoring potential in the 200 IM . She was 5th in the event at Big Ten, but scratched the race at NCAAs to focus on the backstrokes. If she decides to swim it at NCAAs this season, she could add a few more points to their total.

The fly events are a weaker area for Michigan, as their highest finisher in the 100 fly at Big Tens, Zoe Mattingly, has now graduated. This is where the freshman class could make a big difference. Incomers Vanessa Krause (53.49) and Emily Eastin (54.24) have immediate top-8 potential at Big Tens, as Eastin is just a few tenths shy of the 53.83 it took to qualify for the Big Ten final, and Krause is already under that mark.

While the Wolverines’ fly group should be able to do a decent amount of damage at Big Tens, they’ll have to improve in order to really make an impact at the NCAA level.

Newcomer Emily Eastin is a strong backstroker, coming in with a personal best 53.54 in the 100 back that would’ve qualified her 6th for Big Ten finals last season.

Aside from Kopas, Carolyn McCann (1:00.93, 2:11.62) is also a returning Big Ten finalist in the 200 breast. If she can get back down to her personal best in the 100 breast, she could move up from the B-final to the A-final in the shorter distance as well.

The Michigan women head into 2016-17 with a good chance at repeating as Big Ten champions. Their freestyle group has plenty of scoring potential in both sprint and distance, which bodes well for their free relays as well as the individual points.

Aside from a lack of depth in the breaststroke events, the Wolverines look good all-around. The freshman will play a big role this season, especially in the butterfly races where Eastin and Krause may be their strongest swimmers.

If everyone swims up to their potential, they should challenge for a top 10 spot at NCAAs again this season.

Is Miranda Tucker not swimming or did she have to sit out a year?

Wondering the same thing. If they have her, their chances of winning Big Ten go way up! Without her IN looks tough to beat!

The Big 10 requires intraconference transfers to spend a year “in residence” at their new school before they can compete, and they lose a year of eligibility.

that sucks. so unfair to the athletes. there are many reasons why someone transfers, sometimes not swimming related. an athlete should be able to transfer to a new school and pursue what is best for them without having to lose 25% of their eligibility.