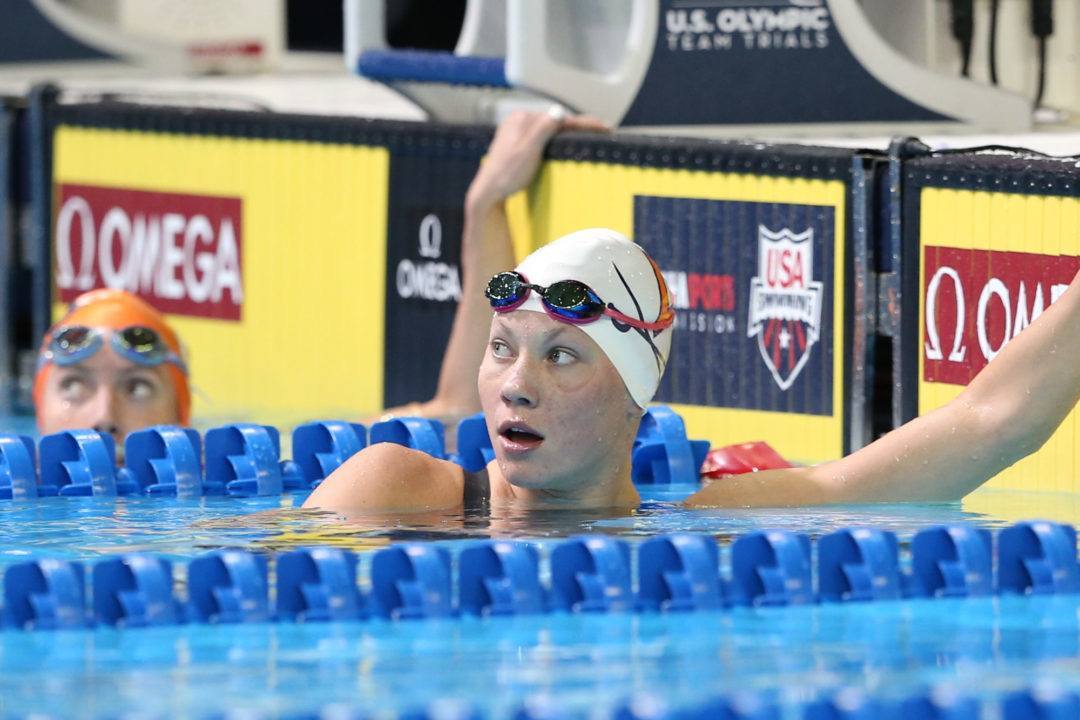 Jennifer Marrkand is the lone individual NCAA scorer returning for a new-look Virginia squad - from the swimming roster to the coaching staff. Archive photo via Tim Binning/TheSwimPictures.com

A senior-heavy Virginia roster shifted its focus fully to the NCAA Championships last year, losing their first ACC title in 10 years to NC State, but scoring 4 of 5 relays at NCAAs and taking 12th as a program.

Leah Smith wrapped up her stellar collegiate career with runner-up finishes to superstar Katie Ledecky in the 500 and 1650 frees, plus a 5th-place showing in the 200. The NCAA team was incredibly veteran-dominated, with three of four individual scorers coming from the senior class. That included Smith, tough butterflyer Kaitlyn Jones (highlighted by a 4th in the 200) and elite breaststroker Laura Simon (3rd in the 100 breast).

Depth was a bit of a concern, but the Cavaliers had a good enough stable of freestylers to take 5th in a historically-fast 800 free relay.

Sprint free had potential to be a major hurdle to Virginia this year, with two of the team’s 4 ACC scorers in the 50 and 100 free graduating. But in a stroke of good fortune, the Cavalier recruiting class brought in by former head coach Augie Busch complements the prominent sprint reputation new head coach Todd Desorbo brings with him from NC State.

First, the bad: Ellen Thomas (scored on 3 relays at NCAAs, ACC A finalist in the 50) is gone. So is Shannon Rauth (1 NCAA scoring relay and an ACC B final 100 free). But senior Caitlin Cooper returns after going 22.08 and 48.94 last year, A finaling in the ACC 50 free. So is junior Eryn Eddy, who was the team’s best 100 freestyler at ACCs (48.71). Both need some improvement to score NCAA points, but give UVA the foundation for sprint free relays that will be almost entirely rebuilt from last year.

As a freshman, Morgan Hill had a great year last year, highlighted by a 1:45.4 at ACCs in the 200. Her best pure sprint times came mid-season (22.66 and 48.53 at the Georgia Invite), but she’ll be relied on much more this postseason as a sophomore.

Florida prospect Kyla Valls will be the key pickup for Desorbo’s new sprint group. She’s got times of 22.8 and 49.9 in the sprints, plus a 1:45.9 in the 200 free, and with 7 of 12 NCAA free relay legs graduating from last year, she’ll need to get up to speed fast to keep the Cavalier relays afloat.

The big wild card is Megan Moroney, who was a double-NCAA scorer in 2016.  But she has only one competitive swim on record since July of 2016, and until we know her current status, it would be extremely optimistic to project any national-level contribution from her this year (though she’s got the ability to be a game-changer if she gets back up to speed quickly).

The gray-area middle ground between sprint and distance is that 200 free, which should be one of Virginia’s better events. We’ll cover it here because most of UVA’s 200 swimmers trend upwards in distance rather than downwards.

Jen Marrkand was within a few tenths of scoring NCAA points in the 200 free last year, and is a returning ACC finalist. Also in that final were Hill and Eddy, and all three are bubble NCAA scorers this year, especially if they really take to the new coaching staff’s system.

The versatile Marrkand is also the headliner here. She’s got the time to score at NCAAs, but went out a little fast and then took a DQ last year on the back/breast turn. Her lifetime-best (1:55.2 from the Georgia Invite last December)  would have put her in the NCAA Championship final.

The rest of the IMs are a discipline where Virginia is young, but still a ways away from making NCAA waves. Rachel Politi was an ACC A finalist in the 400 IM (4:11.07 in prelims) and just cracked two minutes in the 200 IM as a sophomore. She’s improving rapidly, having dropped from 4:29 to 4:18 as a freshman and 4:18 to 4:11 last year. Her biggest point of emphasis this year has to be backing up her prelims times at night, but with her improvement curve, Politi could be a dark horse NCAA scorer in the 400.

She’ll have two solid training partners in that junior class with her: ACC scorers Vivian Tafuto and Sara Stranick. Meanwhile the recruiting class has 1:58.3/4:14.1 talent Abby Richter, who should be the team’s best 200 IMer from the get-go.

The 200 fly is Marrkand’s third and probably best event. She was 3rd at NCAAs last year for a boatload of points, trailing national teamers Ella Eastin and Katie McLaughlin. Though Marrkand is unlikely to swim the 100 fly individually, she’s a strong enough relay piece, splitting 51.9 at NCAAs.

Marrkand’s points make this grade look a little better than it is, because the 100 looks like a struggle without her. UVA only scored two 100 flyers at ACCs last year, and both are graduated. No one in the recruiting class is primarily a butterflyer, but Richter might get pulled in here on account of her lifetime-best 54.1 (though she’s much better at backstroke and IM). Freshman Anna Pang could be another option, but that’s very dependent on how she translates her long course times into the college pool. Even there, she’s been 1:03.2 in the 100 meter fly and probably needs some work to be a real freshman impact swimmer.

On the plus side, Politi is pretty good at the 200 fly and several of the prospects are good over a distance as well.

After struggling mightily last year, backstroke is where this team could really hum, based on a monster 200 back recruiting class. Virginia has no less than five girls under 1:55.1 with some high-ceiling talents.

Marcie Maguire out of Connecticut has the most top-end speed (53.6) and could allow Marrkand to stay on the fly leg of the medley relay. Maguire is also 1:54.6 in the 200 and should probably focus solely on backstroke unlike some of the others in the class. Meanwhile Emma Seiberlich is 1:54.9 and 54.1 and is also a pure backstroker. Caroline Gmelich is more 100-based, with a 53.7 best time of her own.

Returning senior Caitlin Cooper was the top 100 back finisher on the team last year, going 53.4 at ACCs.

All that said, Virginia projects to have tremendous depth in this event, but NCAA points are not easy to come by. In 2017, it took 51.7 and 1:52.5 just to eke out a single point in either backstroke race. The “+” on this grade speaks to both the great depth of this group and the potential for one of these freshmen to explode (perhaps like Alexia Zevnik did for Coach Desorbo at NC State last season), but the letter grade speaks to the brutality of the NCAA in women’s backstroke at present.

Losing longtime breaststroke staple Laura Simon will hurt, but Virginia does have three rising young talents in the breaststrokes. Vivian Tafuto was an A finalist in both breaststrokes at ACCs last year in lifetime-bests 59.7 and 2:11.4. And she’s shown solid improvement in two years with UVA. Behind her, freshman duo Mary Claire Tansill and Madeleine Vonderhaar both scored at the conference level last year.

Tafuto is a decent bet to score an NCAA point or two, if she can be at her best for the big show – her lifetime-best would have just snuck in to score in the 100 last year. The other two are a little ways out, but both young. And training together should only help out all three as they step into Simon’s vacant shoes.

It will very much be a rebuilding and reloading year for the Cavaliers in Desorbo’s first season. His new-look staff have intriguing resumes, and despite a strong graduating class, Virginia still returns a few of the key pieces that had this team dominating the ACC and settling among the NCAA’s top tier just a few seasons back.

Jen Marrkand is the obvious leader, and should impress as she finally gets the limelight after three years in Smith’s shadow. Watching the young backstroke group develop should be an exciting storyline, and Paige Madden has potential to be a great all-around freestyler. Defending its 12th-place finish at NCAAs might be out of range for Virginia this year, but Desorbo & co. have the pieces to start building something special this year in Charlottesville.

Ummmm – Assuming that the best swimmer on the team makes a full recovery from surgery (early indications are positive), the Cavaliers will do much better than your projection. Do you need her name? She scored in 2 NCAA individual events in 2016 and was on 4 scoring relays. She was also an ACC Champion. I certainly think she deserves a mention.

There is also real potential to score some points in Diving.

norevhoofan – Megan Moroney has swum one single race in the last 13 months, per the USA Swimming database. While she’s certainly an impact swimmer if she comes back at the level she was previously at, it’s very speculative to make any sort of meaningful projection for her until we see her compete.

Thank you for giving Megan her due. She has been working hard, and deserves the recognition. I see you revised the article as well.

Fun to look back at this. NCAAs are around the corner. With 12 Women qualified in individual events and Free Relays well seeded, I will be disappointed with less than a Top 10 finish. And I can’t resist an “I told you so” about Megan Moroney.