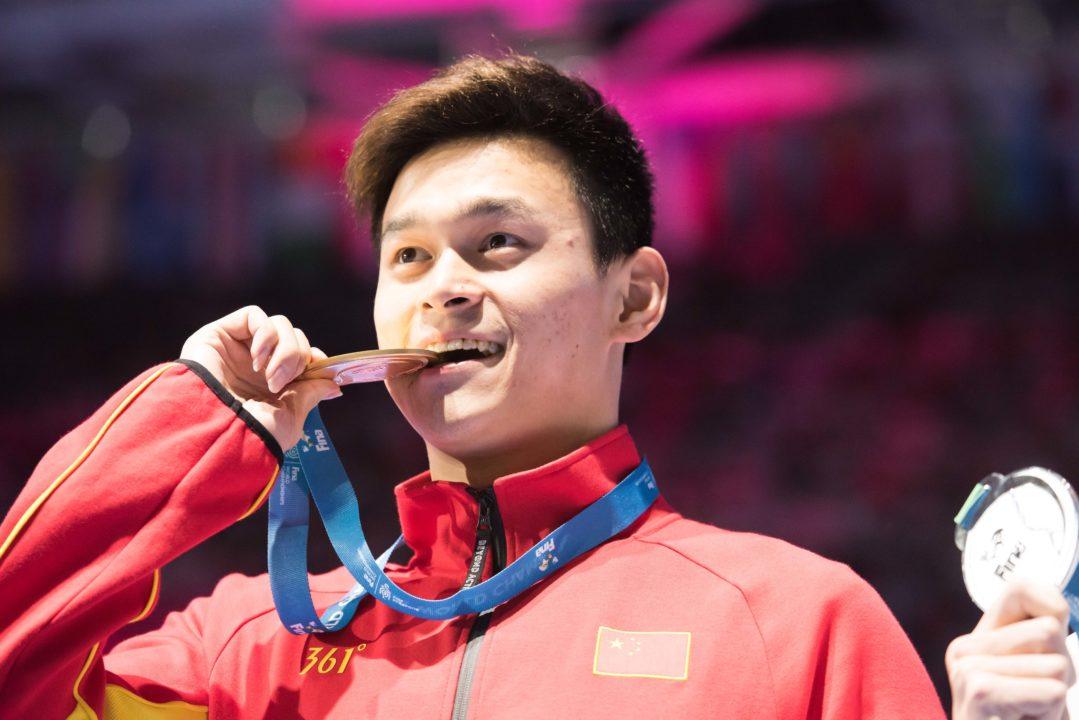 The Chinese team has released a statement on Sun Yang's absence from the men's 1500 heats. Current photo via Mike Lewis/Ola Vista Photography

It was reported earlier this morning that two-time world champion Sun Yang had opted to withdraw from the men’s 1500 free, failing to show up for his preliminary heat.

The Chinese team has since given a brief statement on Sun’s decision, tweeted by our own Loretta Race.

The statement reads, per Xinhua: “Sun competed in several events with high intensity here during the past days. For the sake of his health and preparations for the Tokyo Olympic Games, Sun has decided to withdraw from the 1500m contest here.”

This move wasn’t a big surprise, as Sun has slowly gravitated away from the mile, and hasn’t done it in an international final since 2013. He had a mysterious no-show at the 2015 Worlds, which stirred up controversy, but he cited a heart condition as the reason, and then he failed to advance to the Olympic final last summer.

Mykhailo Romanchuk of the Ukraine (14:44.11) and Gregorio Paltrinieri of Italy (14:44.31) were the top two qualifiers out of the heats this morning.

The translation is not correct. They said Sun will swim for Tokyo Olympics, so they didn’t want him to be over-exhausted and get hurt.

The least they could have done is made up some injury. The statement doesn’t make much sense. This is what he prepares for, but he needs to rest up for 3 years from now?

This tweet made me LOL. Reads like, “After a tought week, Sun needs to rest up for an important meet coming up in 3 years.”

Totally. The guy needs a long taper without his heart meds.

Of course we would have this suspicion considering his past.
What’s new?

Everyone is thinking the exact same thing. If they retest his samples in a few years, Townley Haas will be the winner of the 200 free.

Statement should read “He is scared of the Italians.”

Then why Italian was beaten by Sun in 400m?

Because Sun knew he could win. But the 1500 is a different story, and this has a lot to do with “losing face”, a huge component of Chinese culture…

I don’t think so. Simply he is not a long distance swimmer anymore.
But all these excuses are awful, just say “he won’t swim the 1500 free anymore”.

This is the truth.

I bet there was a doping test before the 1500, and Sun withdrew before he could get caught!

Enough. We know has a heart problem and we know his fitness and training is not the same calibre as it was 4 years ago. Lets take it as it is and stop with these ad hominum attacks. It’s annoying as hell to see this in EVERY SINGLE ARTICLE.

he is as much a cheat as Efimova. Deserves what he gets in EVERY SINGLE ARTICLE!

So you’re really saying Sun and Efimova aren’t really cheaters? I agree with you 100% :)! Do some research and understand ever swimmer not from America swimming fast doesn’t have to be cheating?? Look into the circumstances under Efimova AND Sun and understand stuff happens. You’re an awful swimming fan.

I’m willing to bet he has been tested at this competition before the 1500m. Also, only fools fail drug tests at big competition. Almost everybody that cheats can pass a drug test at their championship.

@Swimmer, At least, he is not as brave as your brother Armstrong.