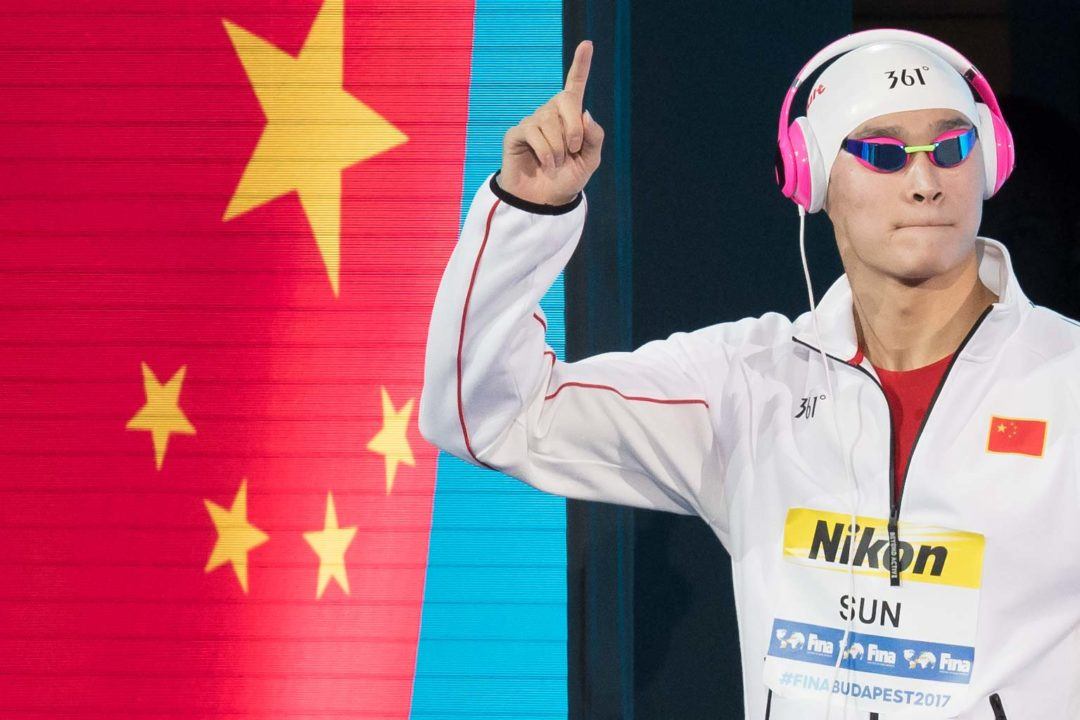 Sun has been a bit of a question mark in the men's 1500 free since he was a no-show in the final of the event at the 2015 World Championships. Current photo via Mike Lewis/Ola Vista Photography

Despite being the World Record holder, China’s Sun Yang was a bit of a question mark in the 1500 free at the 2017 FINA World Championships, but he wound up opting out of prelims of the race on Saturday morning in Budapest. Sun was the World Champion in this race in 2011 and 2013, and also the Olympic champion with his World Record time of 14:31.02 in 2012. After 2014, however, he hadn’t been swimming at the same level internationally in the 1500.

At the 2015 World Championships, Sun qualified for the final, but then was a no-show when the race rolled around, leaving swimming fans confused and an empty lane in the final. Sun later cited a heart problem as the reason for his withdrawal. Since he put up a 14:55.11 in prelims there, he hasn’t broken the 15:00-mark. In 2016, he entered the race at the Rio Olympics, but failed to advance to the final as he placed 16th with a 15:01.97.

Coming into this meet, Sun was the 16th seed with his time from Rio. His withdrawal isn’t all that surprising considering he’s seemed to be on the fence about this race over the last couple of years. At this meet, he’s fared much better in the middle distance races. He won gold in the 200 and 400 freestyles in Budapest, but was unable to defend his 800 free title, missing the podium with a 5th place finish.

Not a big news. He’s done with things above 400 meters.

The Sun has set.

Hi Bobo! I’ve missed reading your comments about this meet! I hope everything is OK, your SwimSwam fans worry when we don’t see you here…

When has Sun been anything but a question mark in literally everything?

Occasionally an exclamation point. Even a semicolon once or twice.

And sometimes air quotes here and there.

Afraid, or rational decision? If I had two golds already, but knew, based on my training focus and recent performances, that I didn’t stand a chance of medaling in the 1500, I’d be inclined to pass on the 15 minute pain-fest as well.

He’s the world record holder, I think he would medal. He cried like a baby after the 400 to the media, said the number of events was too much (really?), but having watched him over the last 7 years, this is his go-to excuse now when he has very tough competition, he’d rather take a pass than work very hard and lose…

Not a huge Sun Yang fan, but your comment is totally baseless and ignorant. Prior to the worlds, his coaches (in China and Australia) have been saying his focus for this meet was on 200 and 400. He swam 800 against the advice of his coaches just to see where he was in terms of longer distances. Afraid? Have you seen how he dominated both 200 & 400?

Expected. His long distance days are over.

Except he’ll swim it at the Chinese National Games in a few weeks and be in the 14:30’s…count on it.

even if it was true, which I doubt, it would be irrelevant in the grand scheme of swimming things

If he went in the 14:30s it would be irrelevant? Since when is the potential fastest time in the world irrelevant..

All of that training with the starting block fin will pay off <333.