Cal Bears Head To SoCal For Pair Of Duals 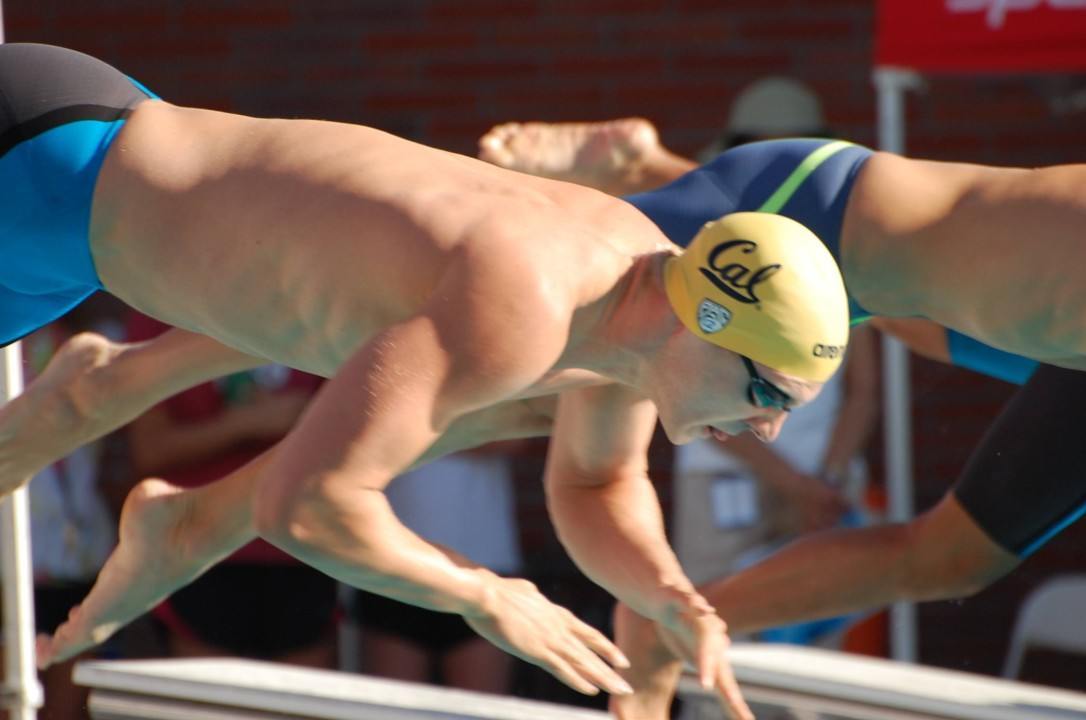 The No. 2-ranked Cal men’s swimming and diving team continues its spring campaign when it heads to Southern California for dual meets against Cal State Bakersfield and USC. Archive photo via Anne Lepesant

BERKELEY – The No. 2-ranked Cal men’s swimming and diving team continues its spring campaign when it heads to Southern California for dual meets against Cal State Bakersfield and USC. Friday’s meet against the Trojans will be televised live on the Pac-12 Network, Pac-12 Los Angeles and Pac-12 Bay Area and both meets are scheduled for 2 p.m. starts.

The Bears return to action after a successful final home weekend in Berkeley and wins over Arizona and Arizona State got Cal back into the competitive spirit after spending the winter training. Big early leads on both days helped pave the way for one-sided wins and the Bears extended their dual meet winning streak to 27.

Cal State Bakersfield enters the week on the heels of a strong showing against UC Santa Cruz and Fresno Pacific. The Roadrunners have faced just one Pac-12 school this year, dropping a 192-95 decision to USC on Oct. 23. Diver Brayden Greenwald picked up WAC Diver of the Week honors on Jan. 26 after setting a school record in the 1-meter.

USC enters the week with a 5-1 record in dual meets and last time out beat Wisconsin 186-113 on Jan. 12 in L.A. The Trojans won the 2015 Pac-12 championship for their first conference title since 1979. Sophomore Jon Knox swept the backstroke events against the Badgers and head coach Dave Salo’s squad also won both relay events against a good Wisconsin team.

WINTER WINNERS
Cal swimmers enjoyed a productive winter break in the pool, headlined by Josh Prenotearning Pac-12 Swimmer of the Month honors for December after setting top national times in three events at the Georgia Invitational and winning the 200-meter IM at the Mutual of Omaha Duel in the Pool. Prenot also won the 200-meter breaststroke and Ryan Murphy won the 200 backstroke at the Arena Pro Swim Series in Austin, Texas.

TEAM USA COMES CALLING
Four current Cal men’s swimmers and four alums were named to the 2015-16 Team USA roster that was announced in early September. Junior Ryan Murphy, seniors Jacob Pebley andJosh Prenot and freshman Andrew Seliskar all earned spots on the roster thanks to ranking in the top six in the United States in events from Jan. 1 to Aug. 10. Also included on the list were former Cal swimmers Nathan Adrian, Will Copeland, Anthony Ervin and Tom Shields.

6 STRAIGHT YEARS AMONG NCAA TOP 2
After placing second at the 2015 NCAA Championships, Cal carries a remarkable run of success with it into the 2015-16 season. Head coach David Durden’s squad has finished first or second in the nation in each of the last six seasons and has never placed lower than fourth in his eight seasons as coach. During that run, the Bears own three NCAA championships (2011, 2012, 2014) and two Pac-12 titles (2013, 2014).

SUMMER SUCCESS
Cal swimmers enjoyed a summer filled with international success as several Bears thrived on the world stage. Eight swimmers competed at the World University games in Gwangju, South Korea and the group returned with six medals for Team USA. Josh Prenot won gold in the 200-meter IM and 200 breaststroke as well as a silver in the 400 IM. Jacob Pebley won gold in the 200 backstroke and was a member of the silver-medal 400 medley relay. And, Seth Stubblefield won gold as the anchor for the 400 freestyle relay. A few weeks later, Cal made an impact on the World Championships in Kazan, Russia as, with Bears coach David Durdenserving as head coach for Team USA, Nathan Adrian, Tom Shields and Ryan Murphy all collected medals for their country. All three were part of the gold medal-winning 400-meter medley relay and Adrian won gold as part of the mixed 400 freestyle relay as well as silver in the 50 freestyle. Murphy also took silver in the mixed 400 medley relay.

SWIMMER OF THE YEAR RETURNS
Cal junior Ryan Murphy returns to Berkeley with plenty of NCAA success already under his belt. The reigning NCAA swimmer of the year won two individual titles at the 2015 NCAA Championships, repeating his 2014 victories in both the 100 and 200 backstroke. His time of 1:36.77 in the 200 set American, NCAA and U.S. Open records. Murphy was also a member of Cal’s 200 medley relay team that won the NCAA title in an American record time of 1:22.74. And, by stopping the clock in 44.17 on the leadoff leg of the 400 medley relay, Murphy set an NCAA record in the 100 backstroke. In addition to his exploits in the pool, Murphy was one of Cal’s top student-athletes during the 2014-15 season, earning All-Pac 12 first team academic honors to add to the CSCAA Scholar-Athlete award he won in 2014.