Caeleb Dressel Is Back! Adam Peaty, Kirill Prigoda Still Out for ISL Playoff #4 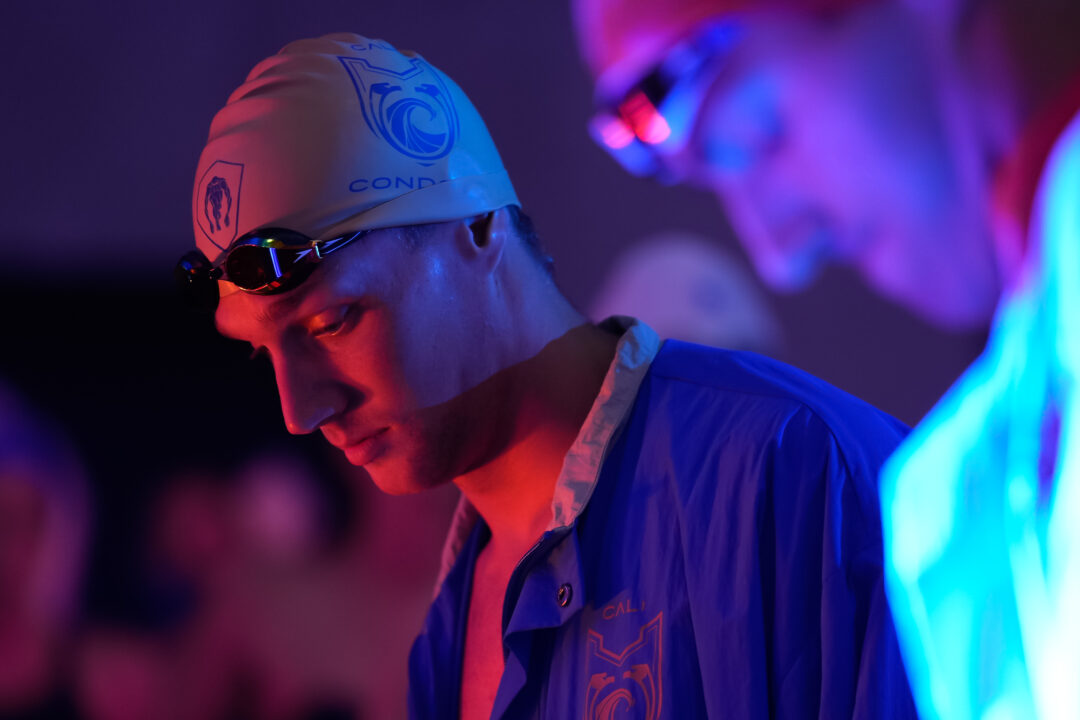 2020 league MVP Caeleb Dressel hasn't raced in the ISL since mid-September, but will return with a lighter schedule for Cali on Saturday. Archive photo via Mike Lewis/Ola Vista Photography

Correction: Caeleb Dressel isn’t in the 100 fly, but is racing this week.

A few names that were absent from week 1 of the playoffs have begun to filter in to Eindhoven, though the three biggest names that everyone was watching for in Playoff #4 are still absent.

Caeleb Dressel of the Cali Condors has returned to swim his first meet in over two months, though he’s not swimming his signature event, the 100 fly, where he is the current World Record holder and Olympic gold medalist.

Instead, Dressel is swimming a lighter schedule of the 50 free and two relays.

While his absence from the 100 fly will cost Cali some points, the possibility of seeing him swim a short course 50 free with more rest is tantilizing, especially in a huge head-to-head matchup in the 50 free with London’s Kyle Chalmers. That also gives him more rest ahead of an even more-anticipated matchup with Chalmers in the 100 free, who broke the World Record in that event in a World Cup meet a few weeks ago.

Dressel and Chalmers will be side-by-side in the 50 free on Saturday.

Dressel said in an interview that ran in People Magazine last week that he’s trying to pull back a little and “prioritize himself a little bit more instead of swimming.”

Dressel hasn’t raced at the ISL (or anywhere) since withdrawing from day 2 of regular season Match #6 in September.

Heading into Playoff #4, the Condors, especially with the return of Dressel, are in position to comfortably win, while Iron will likely finish 4th.

There is still a good battle to be had for 2nd place between the paired teams London Roar and LA Current, who compete against each other in every match this season.

The Current, the #5 seed in the playoffs, won their last match ahead of London, among others, but it was competitive enough that the change in team dynamics with the dominant Condors could impact that. If LA were to beat London again, that all-but-assures LA of a spot in the finale ahead of their Playoff closer next week.

Besides Caeleb Dressel, his younger sister Sherridon Dressel will also return to the team. She’s only entered to swim the 400 free relay on day 1.

U.S. Olympian and Olympic medalist Hali Flickinger will make her ISL debut, racing the 200 back, 400 free, and 200 IM. Paired in the 200 back and 200 IM with the league’s best female swimmer this season Beata Nelson, the Condors are going to put up massive points in those events.

Flickinger will fill some gaping holes for Cali, the defending champions and the team favored to win the title again. Kathrin Demler occupied those spots in the 200 back and 200 IM in the last meet, and only came away with a combined 3 points.

This now frees Demler up to swim alongside Flickinger in the 400 free, and overall gives Cali a more straight-forward lineup.

One change in strategy: the Condors will use Kelsi Dahlia, who has been swimming very well this season, on their “A” 400 free relay and bump Beata Nelson to the “B”.

Iron will also get a bump in this meet, with two contributors returning to action. Marco Orsi will join the team as a relay specialist, and along with the return of Mikhail Vekovishchev, who rushed over from the Russian SC National Championships, the Iron relays and sprint groups have gotten a lot better.

No major new faces for the Roar, but they are using Kira Toussaint, the defending European SC Champion in the 50, 100, and 200 backstrokes, in the 200 back at this meet. They didn’t use her in their Playoff opener, inexplicably, and that arguably cost them the meet in a nail-biter against the Current.

There are a few key lineup changes: Sydney Pickrem, after a light 100 IM/200 IM/400 IM schedule in Playoff week 1, will add the 200 breaststroke. She’s struggled with day one doubles this season, often leaving an empty lane in one of her races.

The Roar have also tweaked Tom Dean‘s schedule. He made his ISL 2021 debut in Playoff #2 and wasn’t at his best. This week, he’ll start with the 400 free and the 200 breast rather than the 400 free and 200 IM, as London continues to try to deal with its men’s breaststroke woes due to the absence of Peaty and Prigoda.

Dean isn’t likely to score in the 200 breast, but at least it saves Sam Williamson’s energy for the more important medley relay.

The Current likewise don’t have any major changes to their roster, though they have tweaked entries.

They’ve pulled Anastasia Gorbenko from the 200 breaststroke and added her to the 400 free relay instead. LA’s 400 free relay includes three very strong legs in Madi Wilson, Beryl Gastaldello, and Abbey Weitzeil. Last week, LA head coach David Marsh used his daughter Alyssa as the other leg in that relay. She split 54.0, which is a good split by her standards, but is not a split that will earn them better than 3rd place.

While the change does probably improve their 400 free relay, it still, on paper, doesn’t seem good enough to beat either the London or the LA 400 free relays, so might actually be a net-loss in points, unless LA is calculating that Gorbenko would have been Jackpotted in the 200 breast (by Lilly King or Annie Lazor or Emily Escobedo or Sydney Pickrem in a very good 200 breast field).

LA is also totally revamping the schedule for their Swiss Army knife swimmer Javier Acevedo. Last week, he swam the 200 back and 50 breast on day 1, and this week he’s swimming the 200 breast and 200 IM. LA’s 2nd swimmer was Jackpotted in both of those races last week.

Why is it so difficult for the ISL to make explicit who will and won’t be swimming? There’s no anticipation factor at this point, just disappointment.

I don’t get it. It’s on the ISL, and the individual team and the individual racers. How all 3 of these can just remain silent about whether key swimmers will appear is baffling. I suspect the ISL wants to keep it quiet when big stars disappear in the hopes that people won’t lost interest, but all it does is create frustration with fans. ISL almost feels like a reality show at this point rather than a real competition. ISL is American Idol while FINA is a Beyoncé concert.

Caeleb Dressel is on Cali’s start list from Omega

Also LA is seeded 5th, not 6th, for the playoffs.